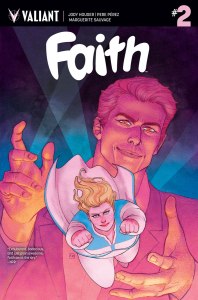 The early portion of the second issue of Valiant’s ongoing Faith series is pretty much “Supervillain 101” as the brilliant-named Chris Chriswell monologues like his life depended on it, running through his origin story and laying out the details of his evil plan.  In less confident hands this could perhaps come across as hackneyed or clichéd, but writer Jody Houser keeps things knowingly self-aware, never quite delving into outright parody but still wilfully embracing the silliness of what appears – on the surface, at least – to be a fairly ‘by the numbers’ bad guy plot.

It definitely doesn’t hurt that the aforementioned origin story is illustrated by one of my absolute favourite artists of the moment, the supremely talented Marguerite Sauvage.  While her previous work on Faith has been restricted to daydreams featuring the title character herself, here Sauvage gets to apply her soft, expressive style to Chriswell’s formative years, giving his story exactly the kind of overly dramatic heft it deserves.  There’s an inherent absurdity at someone being aggrieved about becoming a world-famous millionaire A-list actor, and Sauvage helps to underscore that contradiction beautifully in her visual depiction of his incredibly earnest monologue.

Pere Perez does an impressive job with the “present day” scenes too, giving the book a bold and slightly cartoony aesthetic that really works well alongside the overall tone of the series.  It’s also worth championing yet again the fact that Perez manages to make Faith look like a real person throughout.  She isn’t some perma-pouting, anatomically impossible sex kitten, and no, she doesn’t always look her best, especially when strapped to a death machine. And that’s okay, because she still kicks some major ass.  A little extra praise also needs to be heaped onto letterer Dave Sharpe for his work on this issue, particularly during the moments where Faith is blocking out the interminable monologue of her would-be nemesis while internally formulating her own plan.  Sharpe really helps to sell the situation, and while lettering is an all-too-overlooked skill that only ever really gets brought up if it’s bad, I think it’s definitely worth mentioning when it’s good as well.

Houser continues to strike an impressive balance between the lighter side of the series, pop culture references et al, and actually telling a dramatic, engaging superhero story.  There are nods to previous, well-established superhero problems like trying to maintain her secret identity, but these are given a thoroughly modern twist, such as the unique way one character in particular figures out who Faith really is.  The final page hints at a larger conspiracy to come (and hey, there’s always a larger conspiracy, right?), and the supporting cast continues to be bolstered and brought along gradually, ready to play their roles in future issues.

Overall, this is yet another fantastic issue that takes what could otherwise be a fairly generic situation – a supervillain capturing a hero for nefarious means – and puts an unmistakably Faith-y stamp on it.  Charming, relatable, funny and with a worthy message at its core about never feeling the need to change yourself to please people around you, Faith continues to be one the most fiercely likeable superhero comics on the shelves today. 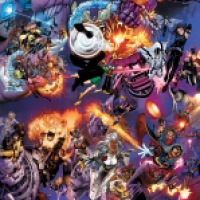 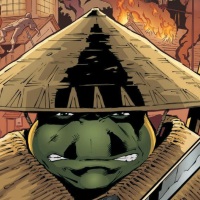