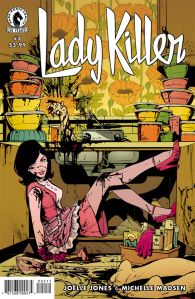 There’s something to be said about quite how bold Lady Killer is. I’m sure we all remember that first limited run – with perhaps the only thing wrong being that we had to wait a month between every damn issue – exploding onto the scene last year, quietly bubbling with tension and intrigue through four issues before a furious, blood-soaked and immensely satisfying finale blew our collective socks off. So we were expecting great things with this second series, and whilst auteur Joëlle Jones mostly delivered in issue #2, there was a mild urge to shout ‘well this is great, but can we get on with it?’.

But that’s testament to Jones’ dedication to world- and stake-building – what made the first series such an absolute joy is that she built a character that had two diametrically opposed facets of her life, and the simpler, safer one made us care what happened in the rather more dangerous one. It was a glorious juxtaposition – one that’s been tried before, but never quite executed that elegantly, and Jones does set about getting on with that above all else, ensuring with issue #1 that we’ve not forgotten about story’s core intrigue.

This issue picks up immediately after the massive tease of a cliffhanger at the end of its predecessor, and let me tell you, it hits the ground running from there. Josie’s getting a lot piled on her plate here, and it’s no mean feat that so much is set up without it ever feeling over-whelming, such is the book’s elegance. Get on with it? Jones was already out the door and on the rocket ship before you’d finished the last syllable of that notion.

There’s something deeply pleasing about Jones’ art as well – and whilst comparisons to a whole swath of classic artists have been raised, what it most reminds me of, as one of those cursed older millennials who knows nothing, is a Don Bluth movie, albeit with rather more murder and dismemberment. So whilst the latter-mentioned atrocities are indeed happening in-panel, there’s a warmth to the art that’s curiously comforting. It must be something to do with the gorgeous way Jones varies her colours between scenes. Or maybe it’s the immaculate period detail. Or the way her storytelling beats somehow seem to squash-and-stretch within static images. Or maybe it’s a whole host of other, tiny little pieces of beauty that add up to staggeringly irresistible collection of art. I don’t know. I’m not a comic book criti-… wait, no, I am… shit…

Ultimately, it’s deeply reassuring that after that mildly hiccup in ‘getting on with it’ in the first issue, we’re now knee deep in it, rather literally, from the first panel. The plot is thickening rather elegantly, with Jones’ expertise in the language of storytelling, both in comic terms and in cinematic terms dishing out a veritable litany of clues and hints (and likely red herrings) as to quite what’ll go down as the story progresses.

If there were any doubts that Jones thoroughly deserved those Eisner nominations decorating her CV, this issue stabs those doubts in the neck and buries them in the swamp. Just absolute magic – we can only hope the series as a whole ends as strongly as its predecessor.