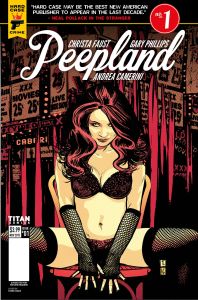 Titan’s latest in their newly-formed line of ‘Hard Case Crime’ comics brings in two heavyweight writers in Christa Faust & Gary Phillips, very much contemporary masters of the kind of pulp crime novels popularised by the likes of Raymond Chandler in 1940’s America.

Ducking into the eponymous strip-club we’re introduced to the rest of the characters – the lovestruck, closeted lesbian AJ and stripper Roxy – as he passes the tape to Roxy for safekeeping, unaware of the danger he has put her in. Soon Roxy is being pursued by remorseless killers and skeevy detectives on the hunt for the tape who won’t stop until they get it back.

As something of a devotee of that whole grindhouse thing, I’m happy to say that writers Faust and Phillips really capture the essence of the scene, and the issue thankfully doesn’t shy away from the more salacious aspects of the era, with some choice dialogue and expletives that, one moment aside – would an 80’s New Yorker really use the word “fuckwit”?? – really give the story some gritty verisimilitude.

Artist Andrea Camerini also does a stellar job on the art, from the semen-soaked theatre interiors and Dead Kennedy t-shirts to some lovely touches like the vintage posters for the likes of ‘I Spit On Your Grave’ that litter the background. Her art is also brilliantly complemented by Marco Lesko’s vibrant palette of neon pinks and gutter greens.

Steeped in the grit and gristle of the genre and not afraid to wallow in it, this limited series looks like being a worthy addition to the canons of the respective creators, Titan’s fledgling line and the hardboiled crime genre in general. It’s as caustic, sleazy and dangerous as a 42nd street showing of Forced Entry. 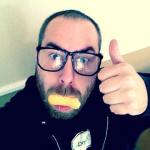 The writer of this piece was: Chris Downs
Chris Tweets from @ChrisDownsy