Ahead of its launch at the start of November, we’re thrilled to be able to sit down and have a chat with writer Alex de Campi and artist Tony Parker about Mayday, their brand new Cold War action-thriller.

With a fantastic soundtrack, an intriguing hook and some stellar colouring courtesy of Blond, this Image Comics series grabbed our attention from the moment we first heard about it.  But rather than explain the story ourselves, we decided to let Alex handle the introductions.

ALEX DE CAMPI: It’s April 1971. The CIA are handed the espionage coup of the decade when a KGB general defects with a list of all Soviet intelligence assets in Asia… including spies within the US Army in Vietnam. All Jack Hudson has to do is get the defector and his microfilm from Hong Kong to California… and keep Palm Springs’ overzealous FBI office from turning everything into a freakshow. All Codename: Felix has to do is kill the defector and get the microfilm back to the USSR, by any means, fair or fowl. Easy, right? Now throw in a beautiful woman, a fast car, and a lot of drugs.

I like to say it’s BADLANDS or ZABRISKIE POINT, if the young couple on the run from the Man were Soviet operatives. Or Ken Russell directing a Bond film in California.

BCP: Alex, this sounds like something of a passion project for you. Would that be a fair assessment?

ALEX: Every project is a passion project for me. I’m at a great place in my career that I get to write about exactly what I want, every time. Sometimes I kinda forget it’s not like that for other people. (Mind, I say no to projects a lot. No is such a wonderful word.)

BCP: What is it about this particular era that fascinates you so much?

ALEX: Two things. First is its parallels to right now — how I can write through the distancing lens of history about anger and riots and despair and terrorism and the Establishment. Second is how amazing what actually happened was. Like, nobody does the research. I know writers can just make shit up, but I always find that real lives are so much more absurd than fiction. I read… gosh, more than a dozen autobiographies of CIA case officers and KGB defectors and folks who were high up in other Warsaw Pact foreign intelligence operations (the Stasi, the Securitate, etc). Real espionage was so much work at the desk, and so little on the street. And the stuff on the street was wild, anything could (and did) go wrong. The operatives were often young; there were so many crazy mistakes… I mean, you just have to look at the Angleton era. Hell, I could write an entire epic series just on internal politics at the CIA’s Soviet Bloc division in the 1970s, from Angleton to Stansfield Turner standing down Moscow Station.

BCP: Tell us a little about Rose and Felix, our two Soviet operatives. What’s their story?

ALEX: Rose is nomenklatura, from a privileged family (uncle in the Politburo). She’s been to the fancy schools; the Institute of Foreign Languages in Leningrad, and has spent time working for the KGB in Hong Kong. She’s comfortable in foreign countries and her English is great. Unfortunately, though, as a child of relative privilege under Brezhnev, she doesn’t have a great sense of consequences.

Felix knows nothing but consequences. He’s a street kid from Stalingrad / Volgograd who joined the military and had some temperament problems so ended up in Military Intelligence as someone who would pull a trigger without asking questions. (In general, you didn’t ask questions in the USSR.) He’s a thug. Badly educated, poor English, absolutely overwhelmed by America… but the worse things get, the more comfortable he becomes.

BCP: What kind of tone should readers expect from the series, both narratively and visually?

BCP: How have the pair of you tried to make sure that MAYDAY stands out from the glut of other cold war-themed comics out there?

ALEX: Huh. I can’t think of a single other Cold War comic on the stands right now.  I think the spy genre is incredibly calcified, and so it’s very easy to do something interesting with it… but nobody ever does. It’s just white guys in suits with gadgets. Occasionally it’s a white girl. And everything is very fancy, very high society. There’s your glut. Bond wannabes. (Bondabees?)

When most American writers are so fixated on making “the next Bond”, it becomes very easy to do something that feels radically different. Like, psst, what happens if the hotshot spy isn’t in a suit, and doesn’t have any gadgets? What if he doesn’t speak English very well? What if what he’s doing feels more like terrorism? How long can I make you like him?

BCP: Music clearly features prominently in this series, and the playlist that permeates the first issue is truly glorious. How did you go about selecting the soundtrack for the series?

ALEX: Mayday was always about music as much as it was about making slight adjustments to the spy genre and seeing what happened. Every time we do a miniseries with these characters (and we hope to do many more, but don’t they always) it’s also going to be about a specific moment in musical time. For Mayday, it was about psychedelia bleeding out into the anger of early metal and punk. In 1971, Sabbath, Alice Cooper, and the Stooges all had two albums out. And they were pulling from things like Sun Ra and the more avant-garde classical composers as much as from, say, British bands of the period. So it’s about angry, heavy music, and I contrast that with things like the very American Idol-ish pop standards that were the year’s chart-toppers. And a few old favourites of mine. So it was half musical archaeology and half interweaving things I already knew. We tried not to have too many very obvious songs on there.

BCP: What’s the collaborative process like between the pair of you (and colourist Blond) on the visual side of the book? Alex, do you have a distinctive visual style in mind, or do you let Tony do his thing?

ALEX: I brought Tony on because I saw his original pages for THIS DAMNED BAND and was like “holy shit, he’s amazing”. I give some basic notes in the script (which is a full script) then I let him do his thing. We chatter back and forth over pencils and occasionally tweak something, but really it’s all Tony. As it should be.

TONY: She’s been wonderful about letting me go, but both her and Brendan have been great about keeping me on topic.  I have a tremendous amount of trust in Blond, and he has a nasty habit of making it look far better than I had planned in my mind.

BCP: Tony, aesthetically, how much research did you have to do to capture the authentic early 70s look of the series?

TONY: I tried to do as much research as I could to get the feel of the era.  I didn’t want an idealized version of what we think of an era so many years ago, but I wanted to transport the reader back to that era.  I avoided any modern versions of the era, and tried to rely completely on news and stock photography of the era. I may have pulled elements from catalogues, but not whole looks.  I treated it like any other era, where people don’t have all new items that were manufactured in that era, but an accumulation of items up to that point. For example, most of the cars aren’t 1971, but vary from 1958-1970. I also tried to not only keep the hair and clothes of the era, but also what was considered attractive for the era as well.

BCP: There’s a drug taking scene midway through the issue that is – well – wow. I’m not sure if the research for this one was necessarily as exhaustive, but how much fun was that sequence put together?

ALEX: Lots. But again, the real genius there is Blond’s colours and Tony’s linework. That was all scripted (like, there is an actual character arc within that sequence, and certain key visuals were suggested) but the wow factor is all from Blond and Tony.

TONY: Thank you!  Crazy fun to do, and Blond just set it perfectly.

BCP: Tony, have you made any adjustments to your existing style to work better alongside Alex’s distinctive script?

TONY: I try to sculpt my style to fit every project.  If you were to compare this to This Damned Band (which is set in 1974), there are some differences in rendering and storytelling.  I try to see my responsibility as a storyteller is to entertain, but to disappear in to the story.  I hope that the readers love the art, but I hope they do because it fits the story and entertains them that much more.  That being said, Alex was great about letting me go crazy, and only really had suggestions when it best fit the story. 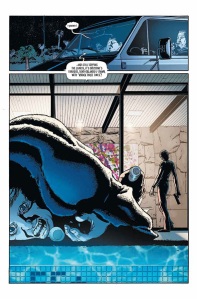 BCP: I saw that you’d planned to make Mayday the first in a series of miniseries. How’s that going to work? Is it the same overarching story? The same characters getting into different scrapes?

ALEX: There will be long-term overarching character arcs, but each miniseries would be a discrete event / mission. For example, the second mini would be the characters getting involved with a Red Army Faction / Baader-Meinhof act of terrorism in West Berlin, ahead of Nixon’s visit to the USSR (and the Munich Olympics. 1972 was quite a year.) Oh, and a lot of Krautrock. That story is mainly about the toxicity that’s often found in alternative subcultures, but also one of our characters comes to a major realisation about himself and his future (or lack thereof). Another falls in love. Doing something as discrete miniseries allows us to have longer breaks between arcs if we want to, and then every new mini is a new #1 so we can make it more of an event.

BCP: And finally, what would each you say to someone who was on the fence about this series to help convince them to pick it up?

TONY: Sexy Russian spies trying to survive in 1971 California.  How do you say Sex, Drugs, and Rock ‘n Roll in Russian, comrade?

ALEX: Gosh. I’m terrible at the hard sell. Do whatever you like, dear (potential) reader. Buy it, don’t buy it, wait for the trade, borrow it from a friend…. I don’t want to tell you what to do.

MAYDAY #1 goes on sale November 2nd from Image Comics.  In the meantime, make sure to follow Alex (@alexdecampi) and Tony (@TonyParkerArt) on Twitter.

You can also check out the official Mayday soundtrack playlist on Spotify by CLICKING HERE.