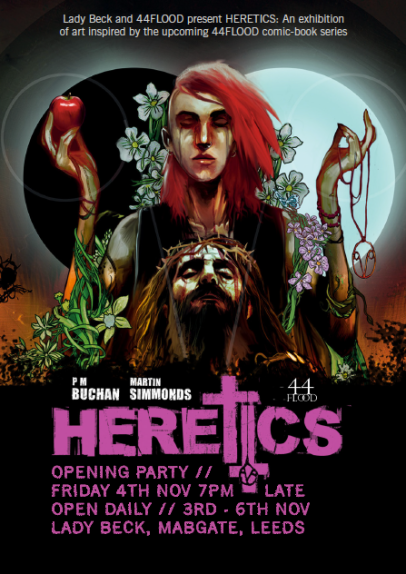 On Friday November 4th, 44FLOOD are set to partner with Lady Beck, an artist-led studio space in Mabgate, Leeds, to host HERETICS, an exhibition of folk-horror art by Leeds College of Art and Plymouth College of Art graduates, featuring original artwork from the upcoming 2017 44FLOOD comic-book series HERETICS, created by Martin Simmonds and P M Buchan.

HERETICS will launch with a free party at Lady Beck, LS9 7DZ, from 7pm until late on Friday 4 November, with free entry, live art, drinks and music throughout the night, including a playlist selected by Canadian Rue Morgue Magazine’s horror music specialist and former Rue Morgue Radio host, Tomb Dragomir.

Speaking about the event, HERETICS co-creator and exhibition co-curator P M Buchan said: “The genesis for the exhibition may have grown from the comic-book series that I’m working on with artist Martin Simmonds, but it has rapidly grown into a showcase for some of the most exciting emerging comic-creators. The range of diversely talented people that have come together to make HERETICS possible is staggering. We’ve got an artist that’s worked on Red Dead Redemption and the Grand Theft Auto series, an internationally-acclaimed glitch artist, artist’s who are creating comics based on some of the world’s most popular licensed properties, and to top it all off we’ll have an original piece from Ben Templesmith, one of the best respected artists in the comic-book industry. I’d advise anybody coming to the opening party to arrive early!”

The collection will be co-curated by Leeds-based illustrator and artist John Pearson (Beast Wagon) who also spoke excitedly about the event, saying; “This will be the third year running that I’ve co-hosted a pre-convention fringe party to mark the beginning of the Thought Bubble weekend comic convention. Both of the previous events were fantastic successes and this year we wanted to try something new, showcasing the kind of live illustration events that I put on with my peers all year round, but for the international audience that Thought Bubble draws to the city.”

He added, “I can’t think of anywhere better than Leeds right now for the creative energy in the art scene and Lady Beck is an artist-led space that showcase the best that the city has to offer, with a rolling calendar of diverse events that encapsulate a broad multitude of art practices. The HERETICS exhibition will combine sequential illustration with fine art, mixing high profile US artists with recent fine art graduates and emerging comic creators, showcasing the space where these visions meet.”

Buchan concluded, saying: “What I love most about folk-horror can be summed up by the feeling of willingly entering an isolated community and the dawning realisation of being surrounded by people whose values are very different to your own. That was the beauty of archetypal folk-horror films like The Wicker Man, where Sergeant Howie confronts an island community whose religious beliefs differ from his own. That’s a very human, very real kind of conflict.”

“In the UK today racism and intolerance seem to have become so legitimised that I can see the appeal of setting up an isolated community with more tolerant people, whose values better reflected my own. Feeling at opposition with the majority of the country helps us to empathise with the characters that are traditionally depicted as villains, and I can’t imagine a more appealing starting point to tell a story than that.”

The Facebook Event for the launch can be found by CLICKING HERE, and more details about some of the artists contributing can be found below.

Contributing artists include: Surrey-based artist and graphic designer Martin Simmonds, who most recently acted as artist for the Titan Comics series Death Sentence; US-based New York Times bestselling artist and writer Ben Templesmith, who is most widely known for his work in the comic-book industry, where he has received multiple nominations for the International Horror Guild Awards as well as the industry’s top prize, the Eisner Award, and whose IDW comic-book series 30 Days of Night spawned a major motion picture; UK-based comic artist and illustrator Caspar Wijngaard, who is currently working on Dark Souls and Assassin’s Creed series for Titan Comics and is co-creator of the Image Comics series LIMBO; and Leeds-based illustrator and artist John Pearson, co-creator of the comic-book series Beast Wagon which was shortlisted for Best Comic of the Year at the British Comic Awards 2015; alongside recent Plymouth College of Art graduates, contemporary dark bohemian jewellery artist Stevie-Leigh Smith and award-winning metalsmith Luke Axworthy.