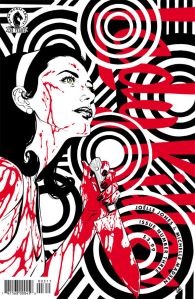 After a slight delay, the second volume of Joëlle Jones’ Lady Killer is back with a bang as circumstances conspire to throw a spanner into the works of housewise-slash-hitman Josie Schuller’s blossoming partnership with professional “cleaner” Irving.

There’s a lot of much-needed character development for the supporting cast here, with Josie’s husband Gene’s perfect veneer finally cracking ever so slightly.  To this point, Gene has always been a bit of a loveable dope, a good guy going about his business as a husband and a father while remaining entirely oblivious to his wife’s sideline in wholesale murder.  Here however, we get the first inkling that everything in his life isn’t quite as wonderful as we first thought, and that – like most people – Gene has his own problems that he’s dealing with.

We also get to find out a little more about the formative years of Mother Schuller, adding some intriguing depth to what was, it has to be said, a previously a fairly one-dimensional character.  Again, it’s great to see these characters being fleshed out, and the way in which Mother Schuller’s history intertwines with Josie’s present day situation is delivered with a chilling flourish.

As should be expected by now, Jones’ artwork is absolutely stellar throughout, with a stylish Norman Rockwell-esque aesthetic mixed with a sense of thinly-veiled menace and several moments of shocking gore and brutality.  The issue opens with a montage sequence showing Josie and Irving working together, and the striking execution makes it one of the most impressive pieces of artwork Jones has produced so far.  Which, given her multi-Eisner-nominated track record, is definitely saying something.

With this issue, Jones has found a way to insert a new potential threat into Josie’s life, throwing her repeated attempts to “have it all” into turmoil once again.  The final pages provide yet another teeth-clenching obstacle for her to overcome, and with a freshly rejuvenated cast of characters, the intrigue factor is ramped all the way up here.

While Lady Killer may have initially made its mark with its brilliant premise and beautifully violent artwork, this second series has added a far more polished narrative, and Joëlle Jones is to be truly commended for continuing to push herself as a writer and telling a considerably more engaging story this time around.  Highest of recommendations for this series, as always.