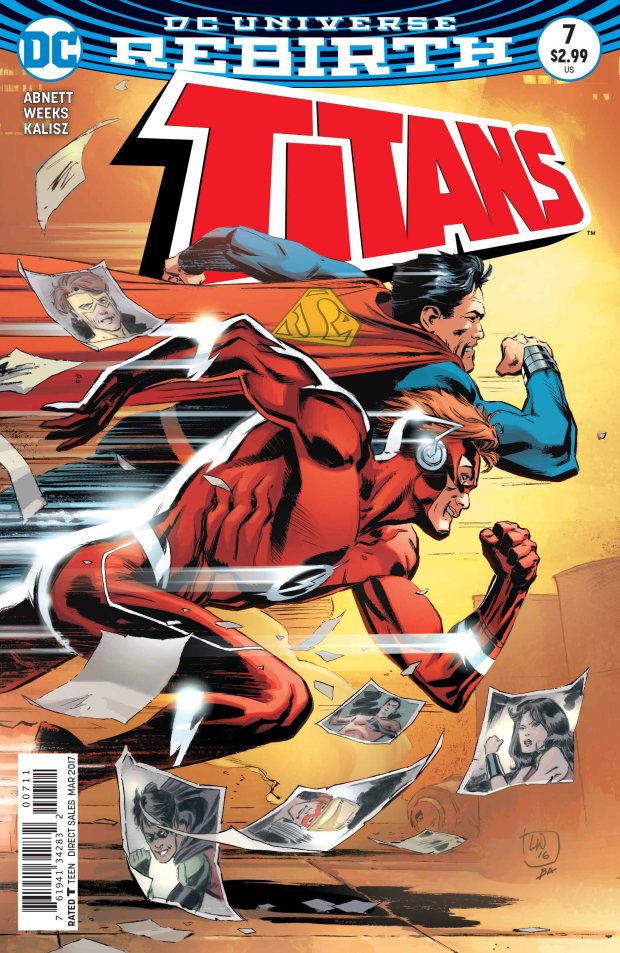 Following a frantic and emotional opening arc, Titans writer Dan Abnett allows a brief moment here for us to catch our breaths as we jump forward in time six weeks to find the team relocating to Manhattan.  The peace doesn’t last too long however, as they instantly find themselves dealing with an new enraged giant meta-human.  Oh, and Superman shows up, providing some typically Superman-esque wisdom to Wally West, drawing on their shared experience of having vivid memories of the “edited” pre-Rebirth world.

As always, it’s the interactions between the team members that really makes this series sing, and Abnett’s blend of humour and genuine emotion helps the characters here feel a lot more real than in other superhero titles.  Little humourous moments like Arsenal developing nervous hiccups when meeting Superman, or his awkward but sweet flirting with Donna Troy (and vice versa) add some much-needed humanity to the proceedings, and Wally’s exchange with the Man of Steel is perfectly pitched to advance the character arc of the Titans de facto leader without feeling too forced.

There are a few different plot threads bubbling under the surface here, such as the unexplained origin of the dangerous new meta and the side-story with Bumblebee visiting “Meta Solutions” to discuss her powers, and it’s not too much of stretch to speculate that these two storylines may potentially turn out to be linked.  There’s also a little tweaking of the status quo going on, with the Titans going through the requisite paperwork to set up their new base of operations in Manhattan.  Once again, Abnett’s gift for dialogue really helps these admin-based scenes flow, delivering an equal measure of comedy and exposition, not to mention an absolute gem of dialogue relating to Garth and his dolphins.

Visually, Lee Weeks’ artwork is a lot softer than the bold, in-your-face approach of Brett Booth from the first arc, which works well in this more contemplative, character-based issue.  Yes, there are action sequences – Arsenal, Donna and Wally’s battle with the aforementioned meta-human, for instance – but it’s the quieter moments that really shine, with Weeks infusing a sense of charm and subtle emotion into the proceedings.  He also does a cracking job depicting the Man of Steel, and his exchange – and race – with Wally is charged with dynamism and an impressive level of humanity.

Dan Abnett is fast becoming the MVP of DC’s post-Rebirth universe, and this series is a glowing testament to that fact.  With his writing here, not to mention his work on Aquaman, he has shown the ability to balance humour, action and epic-scale storytelling while still keeping his characters feeling multi-dimensional and utterly relatable.  The artwork by Weeks here is the cherry on the sundae, and with the beginning of a new arc and a fresh start for our heroes, Titans seems destined to remain at the forefront of DC’s post-Rebirth output for quite some time.