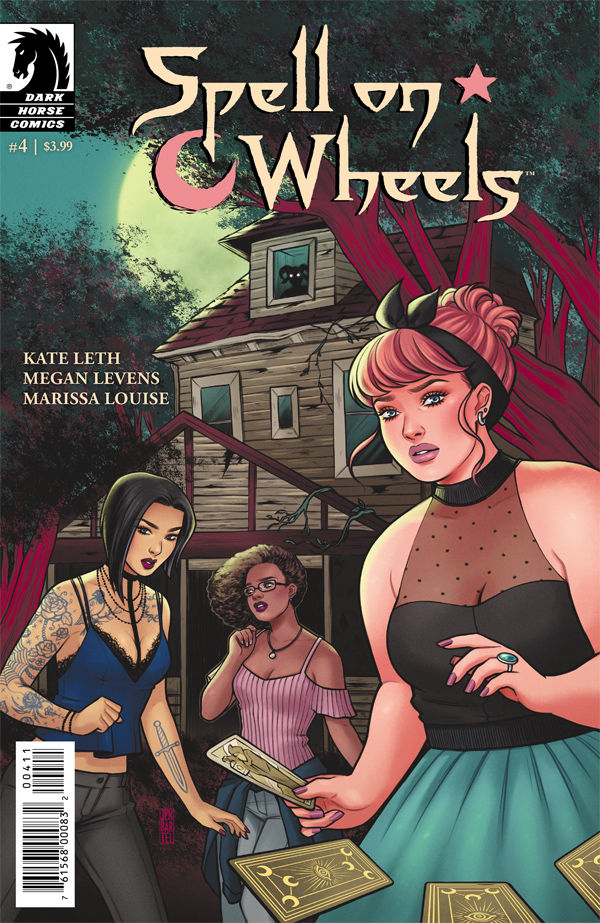 It’s just one day until the New Moon rises in the penultimate issue of Dark Horse Comics’ Spell on Wheels, and our intrepid trio of witches are tracking down the latest batch of their stolen goods, an investigation which leads them to a rather unusual place.  So far they’ve encountered lecherous old men and homophobic spectral ex-husbands (yup) on their road trip, but this time it turns out that their stolen goods are in the hands of a (fairly hot) monster called Paul.  Sweet smoldering satyrs indeed!

I kinda love the fact that, rather than the overly-sexualised female demons and monsters that tend to frequent supernatural comics, what we have here instead is a fairly sweet and charming male monster.  With some serious abs.  Watching Claire fangirling over and flirting with Paul is pretty awesome, and it’s fun to see her finally coming out of her shell a little after serving almost as a mother figure to the other two during the first three issues.

Once again, it’s the interactions between the three witches that really helps to sell the story, with Kate Leth’s sharp and witty dialogue making our trio feel like a group of friends you’d want to be a part of, witchcraft or not.  It’s also probably worth mentioning that this is a series that seriously needs to be either expanded upon or revisited somewhere down the line.  We need more, dammit!  The characters are great, the creative team works together beautifully and the whole thing has a lively, upbeat tone that’s difficult to not enjoy.

Speaking of the creative team working together beautifully, Megan Levens and Marissa Louise once again combine to provide a wonderfully cartoony aesthetic with some cracking character designs and outfits, with Paul in particular coming across really well, abs and all.  There isn’t a huge amount of action here, but Leth’s story provides ample opportunity for Louise to cut loose with her colours, and Levens does an impressive job again of hitting both the emotional and storyline beats with her characters’ facial expressions.

I know I’ve said it before, but honestly, I’m loving this series.  It has charm, humour and some effortlessly likeable lead characters. Plus, the revelation in the final few pages sets things up for what should be a fairly intense conclusion in the final issue, and I for one can’t wait to see how this one plays out.