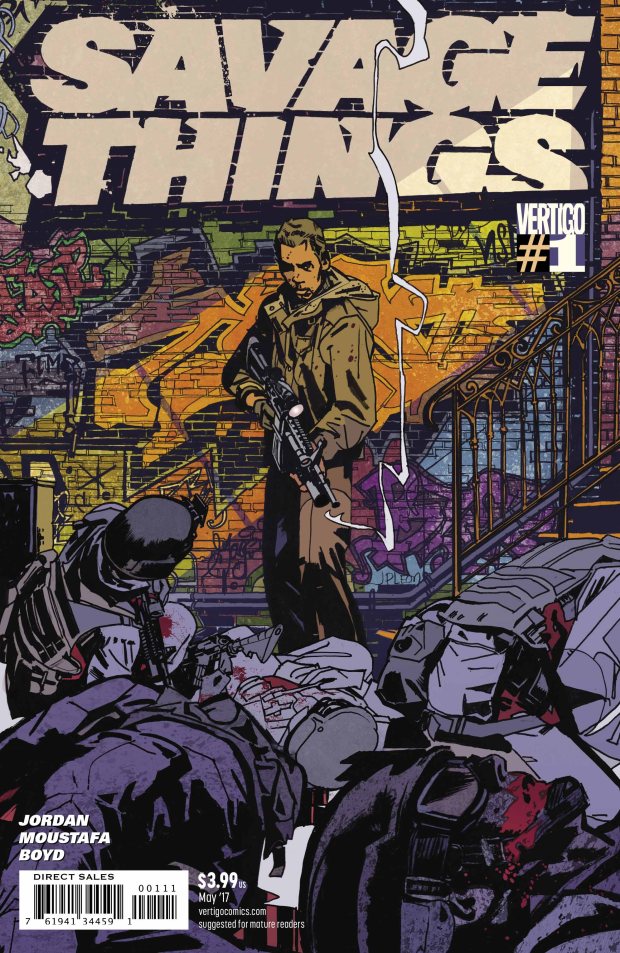 Forty people are brutally massacred at upmarket hotel “The Manhattan”, leaving a grim display of body parts and blood-daubed numbers on the walls.  However, rather than simply a random act of barbaric violence, these events appear to be tied to an aborted government program where sociopathic children were trained to become monstrous killers.  And, with this particular skeleton now most definitely out of the closet, that same government is forced to turn to a forgotten man in a desperate attempt to bring the situation back under control.

Savage Things is the latest offering from Vertigo Comics, written by Justin Jordan and featuring artwork from Ibrahim Moustafa, and this first issue sets out its stall impressively, featuring some wonderfully-executed set pieces to draw the reader in.  The opening sequence featuring the discovery of the aforementioned massacre is handled beautifully, with Moustafa’s typically restrained artwork providing a much-needed sense of realism to the shocking proceedings.  Ditto the flashback scenes showing the formation of this twisted government project in the first place, with Jordan providing a chilling twist to the recruitment of the forty children.

The latter stages of the issue come across as a little more derivative, with tough-guy Abel going all “Jason Bourne” on the group of government agents trying to bring him in. That said, the execution is still handled confidently, even if the idea itself is a little tired.  It’s going to be interesting to see just how this story plays out at the series progresses, and whether it’ll end up being the slow-paced, genuinely shocking thriller of the first half of this issue or the frenetic, full-on action of the second.  I’m keeping my fingers crossed for the former as, even though the ass-kickery of Abel makes for undeniably enjoyable reading, the early stages of the book are far more gripping and memorable than the later ones, and provide both creators with a much better showcase for their not inconsiderable abilities.

Overall, Jordan and Moustafa have crafted an intriguing opening chapter here, dangling a lot of hooks throughout the course of this first issue to snag the reader’s interest.  It still remains to be seen just what kind of story Savage Things is going to end up being, but however it ends up, there’s no denying that the foundations have been laid here for what promises to be a thoroughly enjoyable series.