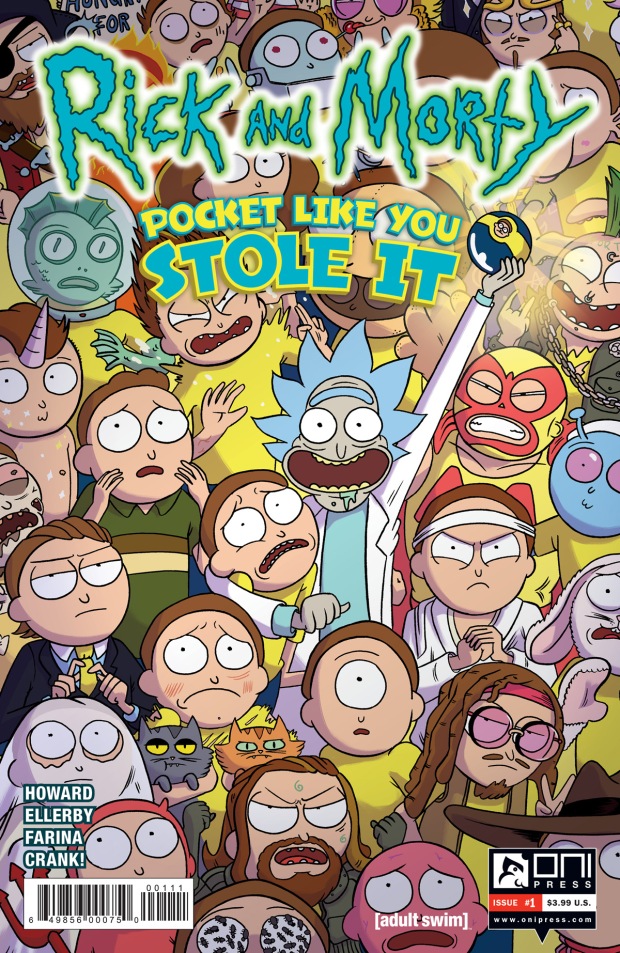 This July, Oni Press are continuing their critically acclaimed run of Rick and Morty comics with a brand new series entitled “Pocket Like You Stole It”.

The new series, from writer Tini Howard, artist Marc Ellerby and colourist Katy Farina, is loosely based on the “Pocket Mortys” mobile game, which takes a somewhat unorthodox look at the whole “Pokemon GO!” fad — with a familiar Rick and Morty spin, of course.

We’re huge fans of Rick and Morty here at the Big Comic Page (primarily because we’re human beings who have seen Rick and Morty), so obviously we were pretty damn excited to find out a little more about this intriguing new series.  And, thankfully, all three of its creators were able to take some time out of their busy schedules to sit down and have a chat with us about what to expect this July.

BIG COMIC PAGE: Thanks so much for your time, guys. Firstly, for our readers who might not be aware, can you tell us what “Pocket Like You Stole It” is all about?

TINI HOWARD: Pocket Like You Stole It takes all the bleak sci-fi trope examination that Rick and Morty is known for, and fuses it with one of the most truly depraved concepts in nerddom – pocket monstering. We aren’t the first people to notice that it’s sort of messed up to capture little monsters and force them to battle for entertainment, but we’re having the most fun with it. It’s like cockfighting, but adorable!

It’s also based on the Pocket Mortys mobile game, which is a blast.

KATY FARINA: If Pokemon was about capturing people and also they fought to the death. And also Pikachu was a weird noodly high school student trying to rescue all the other Pokemon from murder-Ash? Something like that haha.

MARC ELLERBY: Morty is trapped, both figuratively and literally by Rick but he wants to be his own Morty, but what does that even mean? Apart from jerking off, what even makes a Morty? It’s about finding yourself, confronting your own darkness and your family and fighting to survive. But y’know with lots of jokes and gnarly fights and VIDEO GAME STUFF!

BCP: Marc, you’re fast becoming a bit of a Rick and Morty veteran, but Tini, how did you end up working on this title?

TINI: I’d been talking to Ari about finding a project to work on for a while. I ended up binge-watching all of Rick and Morty with my husband one day, and mused out loud, “god, I wish I was smart enough to write like that.” He suggested that I might be. So when I ended up grabbing breakfast with Ari at a convention sometime after that, I asked if there was any availability to work on the Rick and Morty comics, and she lobbed this idea my way! And I’ve loved every second of it.

So like, manifest your dreams, or whatever. The Secret. Wooo. 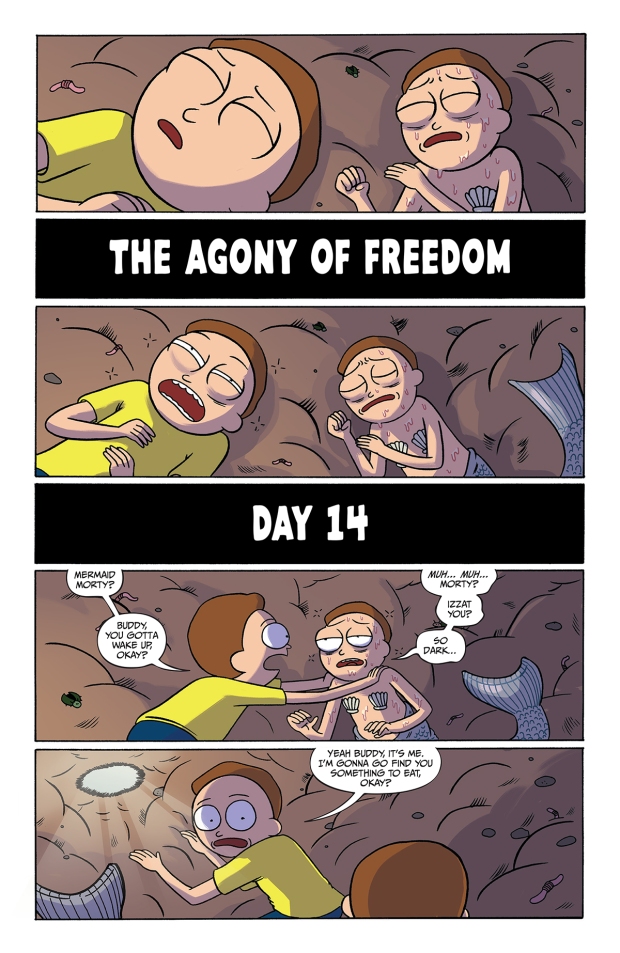 BCP: When you guys found out you were doing the series, was there a particular joke or character that you knew right away you wanted to include?

MARC: I was actually really up for dropping nostalgic videogame nuggets. Even though I didn’t grow up playing Pokemon, I’m in my early 30’s so I had a NES and a Mega-Drive (or Genesis) and was hella into old PC adventure games and those 8bit and 16bit games still make my heart fill up with joy. I dunno if I leant into that as much as I wanted to, but Katy’s done some incredible stuff with colouring our flashback sequences that should hopefully evoke that nostalgic feeling.

KATY: For me it was more like, “I can’t wait to see what Tini and Marc do with this idea”. So, not right away, but more like over the course of this project I keep finding stuff I didn’t know I wanted! Every issue has something I’m so excited to see, which is a really awesome part of working on this series.

TINI: I’ve gotten a lot of positive feedback on “Juice is just an idiot stopping point between fruit and alcohol.” I don’t know from where in me that line came, but it felt truly Rick.

I also knew I wanted to reference a bunch of truly stupid stuff. Like the Zune Media Player, and Dance Moms.

BCP: What do you guys see as being the main appeal of Rick and Morty as a show, and how well do you think that translates to the printed page without the help of the stellar voice-over cast?

TINI: The fusion of sci fi tropes and black humor is my favorite thing about the show. Honestly, when I’m scripting, I tend to read the lines I’m writing out loud. If they don’t sound right, then I change ’em. Usually I write to music, but Rick and Morty I don’t – I play episodes of the show in the background while I’m writing to keep the character voices right.

KATY: Rick and Morty balances fatalism with touching moments in a really unexpected way. There’s a ton of heart in this series; it might be buried under a layer of sleaze and vomit, but the feeling is definitely there and I often find myself surprised by a sudden onslaught of capital-e Emotion by the end of an episode. The comic teams do an awesome job of translating that balance of hijinks and serious feelings in both the writing and art. Art wise we get to be pretty playful with the squash and stretch of the characters and with the color usage!

MARC: It’s hella funny, but also super inventive. It’s really out there but also incredibly down to earth, there’s darkness in the show which comes from the situations for sure, but a lot of it is also this internal darkness. R&M isn’t just a wacky sci fi comedy, it’s not Futurama y’know, it’s really brutal in places.

I actually think the voice acting really helps with the writing of the comic, I know when I’ve written backup strips in the past I’ve always gone back over my scripts and read them out loud in Rick’s voice to make sure I’m getting any stuttering or burps in the right places. Other than that, the show writers have the bar set very high, you can’t fake it on the comic. It has to hit a similar height otherwise what’s the point, no one wants a bad cover version of a song they love y’know. 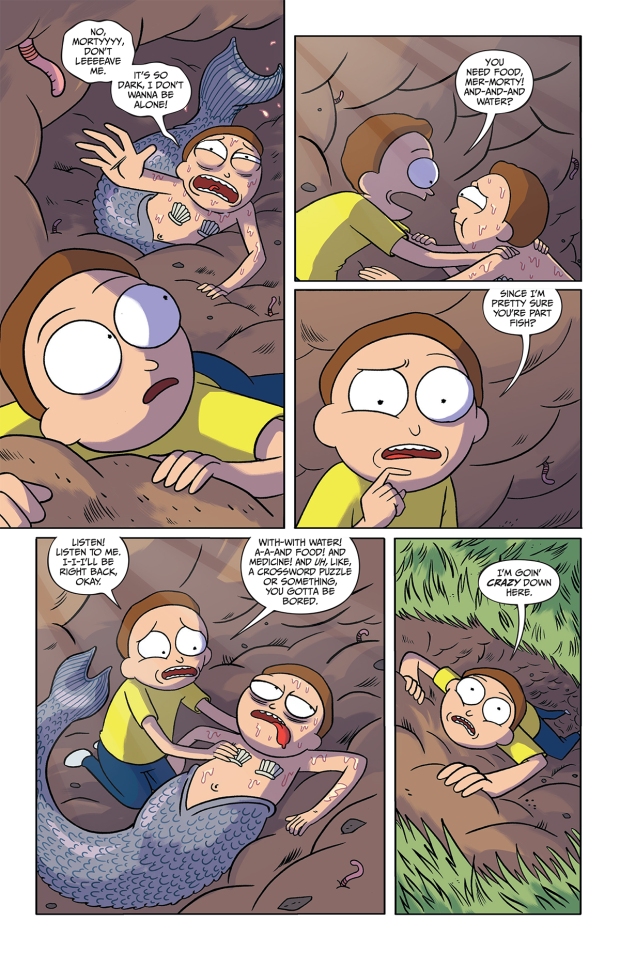 BCP: Now obviously with licensed comics there are certain limitations involved. How do you all find that dynamic as opposed to the relative freedom of working on creator-owned comics?

TINI: Honestly, while there are obvious limitations, Rick and Morty is pretty bananas. There are multiverses and portal guns and interdimensional cable. We get to go pretty nutso.

MARC: Y’know licensed comics can get a bit of a bad rap, but I’ve felt like I’ve had an enormous amount of freedom on Rick and Morty. I’ve worked on some licensed properties where the list of changes were as long as my arm, but I’ve really not experienced that with adult swim and Oni Press. That freedom is probably why I’ve stuck around working on the book for so long, Oni is a great place to work for.

KATY: I think it’s super fun! For the color side of things, I know what the basic colors of the characters and backgrounds should be, and messing around with those rules in order to get a certain feeling across is a fun challenge. I like pushing the look of a series without losing what makes that series work, and colors play a big part in that.

BCP: Was there anything you would have loved to include in the series but weren’t allowed to?

MARC: I had plans to do a bunch of videogame box art homage covers for the series but for whatever reason most of the ideas didn’t get past the rough stage of the approval process. I got one through which was a Capcom VS Tatsunoko homage for our third “Pocket Jerrys” issue, but I keep thinking about the ones that got away. Guys, it keeps me up at night!

TINI: I wrote in a three page scene of Mr. Poopy Butthole recapping the entire story up until that point, locked in a hoarder house full of Magic the Gathering cards. I knew it was going to come out when I wrote it, but sometimes you just have to feed the beast. And the beast wants to write a Hoarders episode, starring Mr. Poopy Butthole.

KATY: A magical-girl-esque transformation with Unicorn Morty? I’m all about sparkles and unicorns haha. But in truth, not really! We all got to have a lot of input in this series which was really cool, and Tini did a killer job of balancing the silly stuff we individually wanted with the overall story!

BCP: With such an established world, fans will obviously have certain expectations. Tini, how did you try to make the story your own while still delivering something the fans will recognise as being true to the show?

TINI: I’m not sure if any other Rick and Morty writers will ever reference Dance Moms.

BCP: Marc and Katy, same question for you – how do you go about stamping your own mark on the visual side of such an established property?

MARC: I mean, my art style is already very similar to the Rick and Morty house style anyway, so I don’t find that I have to change anything or even make it Ellerby-fied. I’ve always had a very animation influenced style so I don’t consciously do anything, I just draw man.

KATY: I think I have a unique way of drawing skies and clouds, and I have specific color palettes I really like using. Working those into this series without losing the source material’s charm I think made it into something that feels like ours!

TINI: Total Rickall. It’s just the best. My ringtone is the ‘Summer and Tinkles’ song.

MARC: Yeah Total Rickall is the best. It’s balls to the wall funny from the start, I remember losing it whilst watching it for the first time. I mean, it’s funny, super inventive and the animation in the final gun fight is incredible. It also felt like a giant “fuck you” to Family Guy’s “hey you remember when…” approach to “crazy writing”. Like here’s a whole episode where cutting away to something totally random is actually integral to the plot and the well being of the characters.

BCP: And finally, if you could each say one thing to someone who was on the fence about picking this one to up to help convince them, what would it be?

MARC: Look pal if you don’t buy it you’re just a chump who’s missing out on a whole issue inspired by Neko Atsume, Pocket Jerrys, mutant Mortys, some sweet Gameboy inspired flashback sequences, the best dang Rick and Morty art I’ve ever done and some pretty cool fight scenes. Plus each issue has a card game that people can play! What other comic has that? Does Batman have a card game? I mean probably somewhere there’s a Batman card game, there’s Batman everything, but still OUR IDEA IS COOL OKAY DON’T RUIN IT GUY.

KATY: “You fool, you don’t know what you’re missing!”

TINI: I want you guys to pick this book up the way Rick Sanchez wants Mulan McNugget Sauce.

RICK AND MORTY: POCKET LIKE YOU STOLE IT #1 goes on sale in print and digital on the 5th of July.  The final order cutoff is the 12th of June.