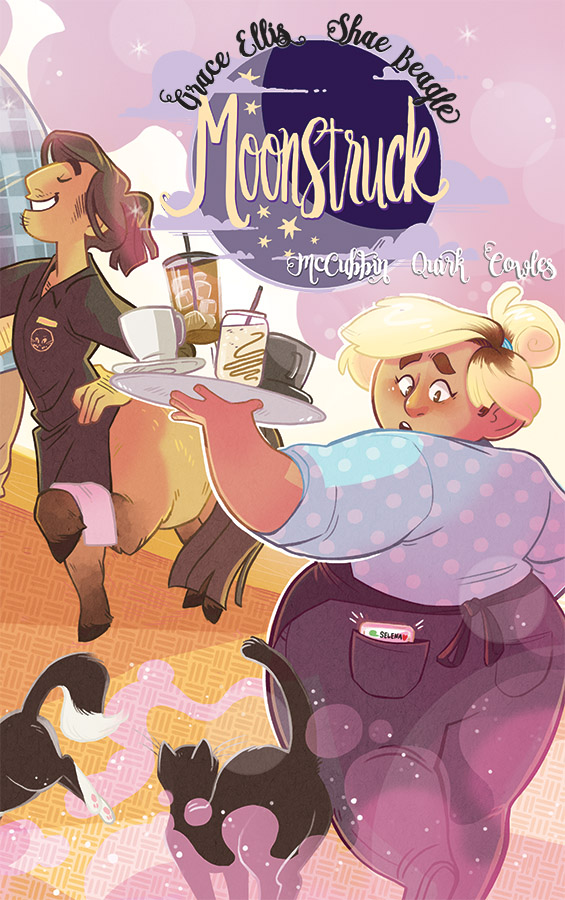 One of the series announcements made by Image Comics at this year’s ECCC that really captured our attention was Moonstruck, a gloriously upbeat, diverse and monster-centric tale from writer Grace Ellis and artist Shae Beagle.

The more we heard about it, the more we wanted to know, and when you had Ellis herself calling it “definitely the best thing I’ve ever written”, it was pretty obvious this one was shaping up to be something truly special – especially when you consider the fact that Ellis is also one of the co-creators of little book called Lumberjanes.

Thankfully, both Ellis and Beagle were able to take a little time out of their schedules to sit down and have a little chat with us about this crazy world of love, relationships, centaurs and werewolves.

BIG COMIC PAGE: Thanks so much for your time!  Now, for our readers who may not be aware, can you give us a quick summary of just what Moonstruck is all about?

SHAE: Moonstruck follows Julie, a nervous barista who’s starting to date her dream girl, Selena, and they have so much in common! They both love the same books, and they’re both werewolves! It’s puppy love at its most literal, but her dream of being unremarkable in a world of mythical creatures get a little confused as they find themselves on a magical journey…

BCP: Tell us a little bit about Julie, our leading lady.  What’s her story?

SHAE: Julie wants to live the most normal life she can. She’s overall comfortable in her identity, being Latina, being a lesbian, but she worries that being a werewolf freaks people out. Julie’s story really resonated with the story of a friend of mine, who at the time was also trying to dance around an aspect of their identity (being Puerto Rican), and they influenced certain aspects of Julie’s final design in a sort of roundabout way. Julie’s got a lot to offer, and we’ll get to see her grow as the story progresses.

GRACE: I didn’t know that! That’s hilarious, because I think that really comes through in Julie’s design. I mean, her design was essentially how I started to develop her story deeper. Wow, what a circular process.

BCP: Grace, you’re probably best-known for being the co-creator of Lumberjanes, which feels thematically similar to Moonstruck, even if the latter is a little more grown up and, y’know, monster-y.  In what way would you say this new series was different – and in what ways is it similar – to your previous work on Lumberjanes?

GRACE: That’s a great question. First of all, I think that you’re right in that Moonstruck and Lumberjanes both have a similar feel to them. If you like Lumberjanes, you’ll definitely like Moonstruck. The themes of like, typical people being swept up into magical adventures that they didn’t necessarily ask for is part of both books. But even beyond that, I think Lumberjanes and Moonstruck are both ultimately about the characters, and the characters are diverse and three-dimensional.

As for how they’re different, well, the most obvious difference is that they take place in different worlds. Lumberjanes is just like our world but there’s magic in the shadows; Moonstruck is just like our world but there’s magic out in the open as a part of daily life. Thematically, I think Moonstruck is more complex than Lumberjanes, but I think they’re both equally fun and raucous, although I will say that Moonstruck is a lot warmer than Lumberjanes, too. Like you just want to wrap it around yourself like a blanket. A very energetic, very earnest blanket. 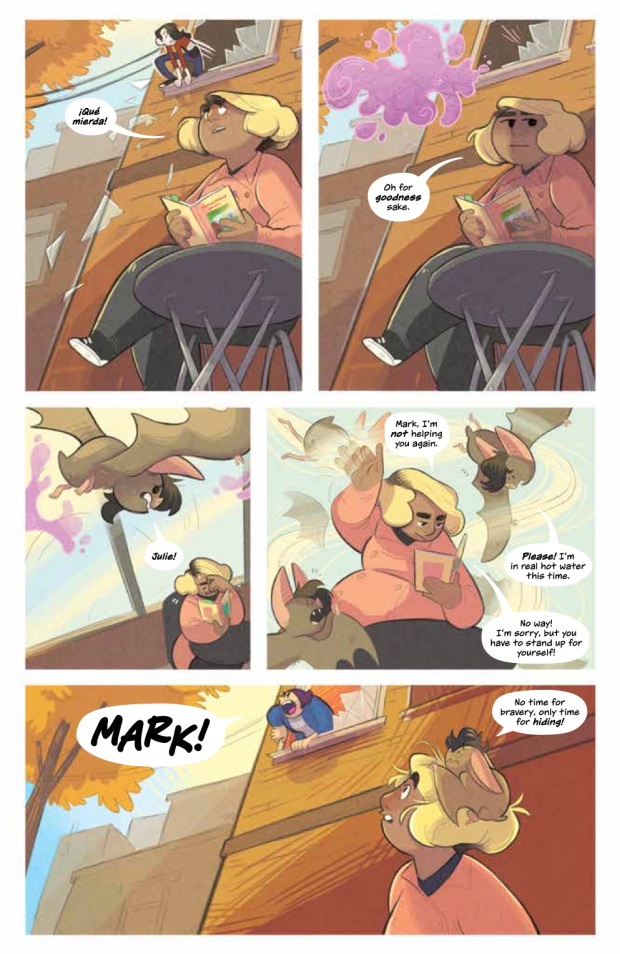 BCP: Shae, I understand this is your comic book debut?  Tell us a little bit about your artistic background, and how you ended up being involved in the project?

SHAE: Yes, this is my first published work! I’ve been back and forth making comics since I was just a little baby, and that eventually led me to the Columbus College of Art & Design. I took a class there called Comics Practicum where the students got to collaborate with professional writers on these 5-page comics for a self-published anthology, and Grace and I were paired up for the project! We found out how well we worked together and Laurenn saw that the world Grace created had a lot of potential as a series, so we joined together to pitch the idea to Image, and here we are! I’m hoping to make even more comics from here on in, so I’m not done yet!

BCP: The character and creature designs in the first issue are fantastic. Was that a collaborative process between you and Grace, or did you take the lead in deciding how the characters should look?

SHAE: The character designs were left mostly for me to decide, within the bounds of what Grace has written for them, of course. The whole teams helps me with ideas for where to start though, especially for background characters and fun little myths and creatures to include.

GRACE: I also want to add that the character designs, because they’re so beautiful and well thought-out, have really helped to inform the story, too. Just thinking about the way Chet’s big ol’ centaur butt moves through the world has really helped shape how I think about them.

BCP: There are definitely some deeper themes at play here, particularly in the case of Julie who finds herself having to hide her true self for fear of how people will react.  Was it important to you both to have Moonstruck speak on several different levels rather than being just “yay, monsters!” (not that that would necessarily be a bad thing)?

GRACE:  Hahaha, I totally agree, I love a good “yay monsters” book. For Moonstruck, it became apparent very early on when I was conceptualizing it that the monster elements weren’t going to be an incidental part of the story or of the world. When I think about identity in real life, I don’t think of race or sexuality or whatever as meaningless trappings because those things affect how other people treat you, and that colors your worldview and can affect your personality. So I started to think of monster-ness as another marked trait, an OTHER other that isn’t race or sexuality or whatever. 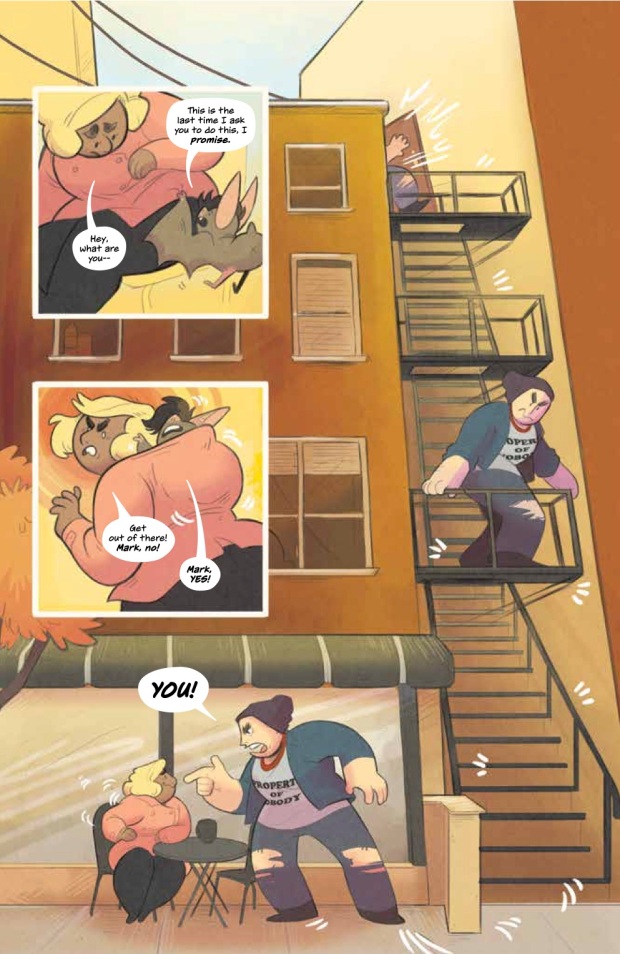 BCP: Did the pair of you have a specific target audience in mind when you were putting this one together?

SHAE: We originally intended an all-ages audience, but we’ve honed in on a more young adult audience. I think that it’s especially important for those readers to see a queer romance/fantasy story that doesn’t end tragically or centers around coming out, you know?

GRACE: Yeah, I agree. I think it’s ultimately all-ages, but I don’t think it’s wrong to say that it’s a YA book. There’s something in it for everyone. Mythology jokes for the adults, butt jokes for the kids (and adults), ya know?

BCP: There has been a lot of controversy in recent months over the whole “diversity in comics” thing, with some people actually going as far as saying that it’s actually *harming* comic sales.  As the creators of such a wonderfully diverse comic as Moonstruck, packed with queer romances and body positivity aplenty, what’s your take on the whole situation?

SHAE: I’m all about diversity in media, across the board. It’s so important, especially for younger audiences, to be able to relate to and see themselves in media, to help them to come to love themselves as much as they love their favorite character. It’s not about pandering and it’s not about sales, it’s about portraying people as being as diverse as people are.

GRACE: Right, I agree with everything Shae said. It’s just about portraying the world as it is. No one says that the 3000th white guy superhero is pandering, but THAT’S ultimately pandering. Like, are you telling me that in a world of aliens and super powers and multi-dimensional travel, the thing you find most unrealistic is that the hero is a minority? THAT’S the conceit you won’t make? Get outta here.

BCP: The first arc also features a neat little ‘story-within-a-story’ from the amazing Kate Leth.  How did that come about?

GRACE: Kate is drawing the comic-within-a-comic, which is called The Pleasant Mountain Sisters, and it’s more or less an homage to some popular YA comics. (It’s a LOVING homage, to be clear.)

The Pleasant Mountain Sisters came about for two main reasons: One, we live in a world full of media, and the media we consume says a lot about who we are, so it became a way to flesh out Julie’s character. And two, I am interested in the form of comics and pursuing stories that are specifically suited to comics, so in using visuals that evoke a specific genre, I’m trying to borrow a language that readers understand in order to clarify our story, if that makes sense.

I mean also, Kate Leth is a great artist, and it’s a real treat to get to work with her on those pages.

BCP: I know people sometimes hate this question because it’s like picking which child you love most, but I have to know – do you each have a favourite character from the series?

SHAE: Ooooooh gosh. If I have to choose, it’d have to be Chet, I’ve got so much love for our centaur baby…

GRACE: Chet is SUCH a sweetheart, too, that it’s hard to NOT pick them.

BCP: What one message would you hope for people to take away with them after reading Moonstruck?

SHAE: (Without giving away too much) I’d love for people to take away the idea that things don’t always work out the way you plan. You can have this grand idea of how things should work out, and sometimes they just don’t, and that can work too, if you let it.

GRACE: That’s tough. I guess I mostly just want people to enjoy it? It is a VERY fun book. I know I can go on and on about themes and form and whatever, but ultimately it’s like, mostly hijinks and puns.

BCP: And finally, what would you say to someone who was on the fence about picking up Moonstruck to help convince them to give it a try?

GRACE: Do you like lesbian werewolves and adventure and coffee and real magic but ALSO card trick magic and punk bands and crop tops and hey wait, come back, don’t walk away! Haha, no this is what I’d say: You’re going to like what you see, I guarantee it.

SHAE: Look at those faces, look at those colors, how can you say no to something so cute?

MOONSTRUCK #1 goes on sale in print and digital on July 19th, but if you can’t wait until then, make sure to check out this video of the creators getting all excited about it (and about each other’s obvious greatness).