And, with the final order cutoff deadline for comics retailers just around the corner, we’re thrilled to be able to sit down and have a chat with both of its co-creators about just what makes this series tick.

BIG COMIC PAGE: Thanks for your time, guys.  Firstly, for readers who may not be aware, could you give us a quick idea of just what Scales & Scoundrels is all about?

SEBASTIAN GIRNER: Scales & Scoundrels is an all-readers fantasy adventure, set in a world of myths and magic. The first story arc follows the exploits of rugged treasure hunter and mysterious hothead Luvander and a crew of glory-seeking scoundrels, as they delve into an ancient labyrinth filled with glittering treasure… or certain doom.

BCP: Sebastian, what was it about Galaad’s style that you felt would be a perfect fit to bring the series to life?

SEBASTIAN: Galaad’s pages are brimming with energy and warmth. Every panel is a window into a world we want readers to get lost in. He pays an enormous amount of attention to detail and adorns the world with little flourishes that make it feel like real place with a real history. His characters are instantly recognizable and relatable, his storytelling is vibrant and animated, and he’s one of the most exciting colorists I’ve seen in my time working in comics. It’s nothing but a pleasure to see him carve a whole new fantasy world out of pen and ink.

BCP: And likewise Galaad, what was it about this story that appealed to you as an artist?

GALAAD: I love fantasy and I’ve been wanting to draw my own fantasy series for quite some time, but I wasn’t compelled to draw something gloomy and gritty. My love for fantasy stems from my childhood, and I wanted to bring back the fun and adventure in the genre. Sebastian and I started working on Scales together from the very beginning and he created this world and the characters knowing I would be the one drawing them, so, really, it’s a dream come true, to have someone with such talent write specifically for you. It’s like a buffet! Anything I want, I can ask him. 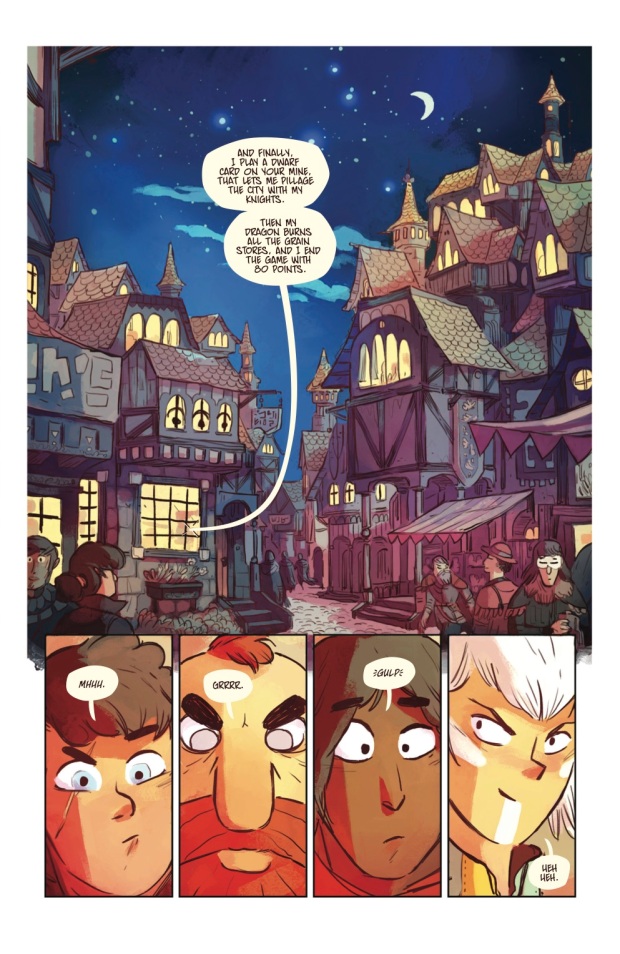 BCP: It feels like there’s a genuine love of fantasy at the heart of this series. What sort of inspirations did the pair of you draw on when you were putting the series together?

GALAAD: I drew my inspiration from many sources, ranging from the Hobbit, to Neverending Story, to the 16 bit JRPG of our youth. Anything that carries that sense of adventure and excitement. We wanted this world to feel coherent, but also homely. Despite the obvious homage, as the first arc progresses and we delve deeper and deeper down the dungeon, I tried to renew the genre by introducing settings that look a bit strange and/or out of place, creating a feeling of uneasiness.

SEBASTIAN: Much like Galaad, I grew up devouring a mix of fantasy novels, comics and games. While there was always a world-ending danger to contend with, what I loved most of those kinds of stories was the fantastical mundanities that the protagonists encountered: strange foods and drinks, different customs and beliefs of make-belief people and places. Those made as much an impression on me and fueled my imagination as scenes of action or armies clashing over the destiny of the world. It’s that attention to detail that we want to bring to Scales & Scoundrels, and make it feel like a world where people really live and go about their lives, even if they have magical beasts and goblins buzzing around their ears at all times.

BCP: Tell us a little bit about Luvander, our leading lady. How’s her life going when meet her in the first issue?

SEBASTIAN: When we meet Lu she’s kind of down on her luck. She’s a hothead, a go-getter and she’s just trying her best to make her way in a rough world, scraping together enough coins to keep her warm and fed. That’s not always easy when you’re inclined to speak your mind and not step down, so she gets into more trouble than out of it. After an altercation with some ruffians in a tavern (what better place to start a fantasy adventure after all!) she decides enough is enough and sets her sights on bigger fish, namely an ancient, bottomless dungeon, at the very bottom of which is said to rest endless treasures. On her way there she meets a ragtag bunch of other glory-seekers, and joins up with them. Dungeon party time! 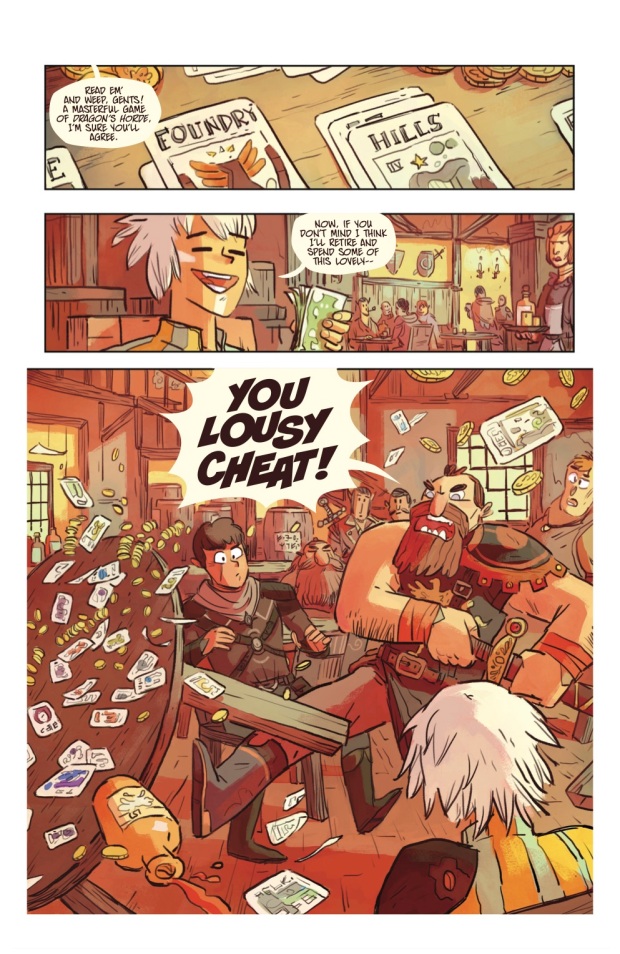 BCP: What kind of tone should readers be expecting from the series, both visually and narratively? There’s definitely a lighthearted edge in the first issue, but it doesn’t feel like an all-out ‘comedy’ at all.

SEBASTIAN: The characters dictate the tone, and we’re in the presence of some real scoundrels here. Not stuffy knights, holier-than-thou paladins or wizards who speak in cryptic tongues, but young and hungry adventurers who all hail from different parts of the world but also all stray from the beaten path. Each of our characters is a bit of an oddball in their own cultures, and that kind of dynamic is something I really enjoy writing. It’s funny because it’s human, and humans are often silly in their most-earnest endeavors.

In general, we wanted the tone of Scales to stand in stark (forgive the pun) contrast to some more “Mature” fantasy works of the past years. Where everything is dark and gloomy and it’s basically the middle ages with a few fantasy nods thrown in. It’s all very “serious” and droll. Our world is bursting at the seams with strange and fantastical sights and people, but it all feels natural and, like this is just the kind of time and place we’re telling a story in. We want readers to be surprised and delighted at every turn, but also feel like they’re coming home. That they’re as much a part of this place as anyone.

BCP: Did the pair of you have a particular audience in mind when you were putting this one together?

GALAAD: Scales & Scoundrels is an all-readers comic series, by which I mean it’s geared towards readers that aren’t comfortable with excessive violence, but who like a good story with action, drama, emotions and high stakes. So it can be enjoyed by anyone, really.

SEBASTIAN: That’s right. Aside from setting ourselves some explicit boundaries regarding the show of violence, we’re really not limiting ourselves in any way. The stories and characters we will be tackling in Scales & Scoundrels will have drama, action, tragedy, heartbreak and truly earned moments of humanity and triumph, but we’re challenging ourselves to do that in a way that we feel really anyone can pick it up and go one a 15-20 minute adventure with us.

Anyone who’s enjoyed stepping through the wardrobe into Narnia, or imagined themselves bopping around the halls of Hogwarts should find something they like in the world of Scales & Scoundrels.

BCP: Galaad, do you have any favourite moments or characters, from a visual point of view, that readers should be looking out for?

GALAAD: We have lots of very cool action beats, with all sorts of creatures and monsters, but as I drew the series, I realized that the moments I truly enjoyed were the quieter, more emotional beats. Although Scales & Scoundrels is an all-ages comic, Sebastian crafted some very deep character arcs and I think readers will look forward to those moments when our characters reveal more about themselves.

I like Dorma, our Dwarven guide, very much. She’s a female character that is not a warrior nor a powerful mage, but has a lot of strength and resolve. I like ordinary characters who can overcome extraordinary odds.

BCP: What have the pair of you done to help Scales & Scoundrels stand out from the wealth of other fantasy books on the shelves these days?

GALAAD: There’s not that many fantasy titles that are lighthearted and colourful, drawn in a hybrid style reminiscent of Japanese animation, so I guess we’re in our own little niche. Like so many creators before us, I believe we created something we wanted to read, because we couldn’t find it out there.

SEBASTIAN: I think Galaad’s art style and sense of design more than anything will help bring readers to our corner of the world, and story-wise, we’re trying to ride a balance between making readers feel welcome in a world that has some familiar sights and concepts, but then we really take them by the hand and dive into a strange and fantastical place with them. The ancient dungeon our scoundrels are keen to explore has existed for millennia in this world, and each layer of it stands as a testament to an ancient civilization, with their own beliefs and myths. So readers are really going on an excavation with our characters, and learning about this world and its history as just as Lu and her friends are.

BCP: And finally, what would you each say to someone who was on the fence about picking Scales & Scoundrels up to help convince them to give it a try?

SEBASTIAN: If you’re looking for a fast-paced, colorful escape into a wild and diverse world of fantasy and adventure, then Scales & Scoundrels is the book for you!