As we nudge towards the end of August and what passes for summer, we have a few extra goodies to add to the prize pile and to get you drooling for Graven’s Great Geeky Giveaway.

Our fine friends from Multiverse Gaming Terrain have generously donated a Supercomputer for you to add your very own Batcave – or, indeed, villainous lair:

It is, as we’ve come to expect from Multiverse, an absolute breeze to build. I was a little wary – multipart MDF furniture, such as the chair, is notoriously tricky, making IKEA on a bank holiday seem like a good idea – but my concerns turned out to be unfounded.

The banks of computers are likewise dead easy to assemble (and as always, the instructions are crystal clear), though I would recommend working as quickly as possible.  To keep the vertical struts in place properly, get the middle horizontal piece on as fast as you can. Also, there’s a range of downloadable screen images freely available from Multiverse (I like the matrix cascade, myself).
And if you really want to go the whole shebang, their excellent Forges of Prometheus range give you all the industrial architecture you could ask for.

That’s not to say that their urban scatter isn’t also excellent. Their phone booth and hydrant kit gives you plenty of bits at a reasonable price.

I’ll admit I was a little skeptical of the hydrants but they actually look rather natty: 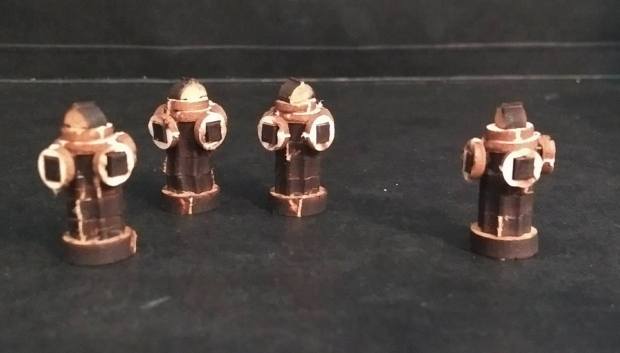 The phone booths are, however, simply amazing:

What I would say is build the 4 sides and then add the roof piece on UNGLUED to hold the sides vertical. Also, it’s an easy kit to ruin – in a good way:

Let’s face it, when was the last time you saw a working phone booth? Still, at least you’ve got room to change your cape.

So, great stuff, highly detailed, at a steal of a price. What’s not to love?

And remember folks, keep liking and sharing for entries to Graven’s Great Geek Giveaway (click here to see everything else you can win)!

Now with August almost over, we had planned to do the draw this week, but we’re going to run the contest on an extra fortnight so you have even more chances to win!  The prize draw will now be on Saturday the 16th of September! So there’s plenty of time to get liking, sharing, retweeting and commenting to earn yourself more entries into the eventual prize draw.

So, until next time… keep Geeking Out!