MAESTROS is the upcoming Image Comics solo project from Steve Skroce, who you may recognise as being the supremely talented artist who worked alongside Brian K Vaughan on We Stand on Guard.

Skroce is also a highly regarded storyboard artist, having worked on movies like the Matrix Trilogy, so when we were given the opportunity to take an early look at the first issue, we already knew that this new series was going to look the part.

What we perhaps weren’t prepared for (and shame on us, right?) was just how talented a writer Steve also is, so we were thrilled to be able to sit down and have a chat with the man himself about how the series came about, and just what readers should expect as the story unfolds.

BIG COMIC PAGE: So, for our readers who may not be aware, give us a quick taster of just what MAESTROS is all about?

STEVE SKROCE: Meethra Kahzar is the Maestro, Wizard King of a myriad of magical worlds across reality. One day that all changes when an ancient enemy returns and murders the Maestro along with his entire royal family. Now, the throne passes to the Maestro’s only living heir, his banished son from Earth, William Little.

Willy was a regular kid who spent most of his childhood growing up in Orlando, Florida, until it’s revealed that his absentee father is actually the most powerful wizard in creation. At first, Willy is excited about his father’s world, he’s expecting Hogwarts but gets the fight of his life instead, until his eventual banishment years later.

This new Maestro has a lot of plans for his kingdom, first he’s going to cancel every barbaric and draconian custom and throw out the old wizarding powers that be. Everything is working fine until his most powerful spell book is stolen, ‘The Book Of Remaking’ allows its user to recreate reality in their image with themselves at the center of a new age. It’s kind of a big deal.

BCP: From the first few pages alone, it feels like this one is a real passion project for you.  How long has the idea for this series been bubbling away in your subconscious for?

STEVE: A long time, better part of a decade. Earlier versions were more of a traditional sword and horse adventure but it’s evolved a lot over the years. It’s not a ‘chosen one’ or ‘prophecy’ story, Willy gains his power and position by chance. Can a nice guy stay nice when you give him ultimate power?

BCP: You’re handling both the art and writing duties for MAESTROS.  What prompted that decision, and how has the ‘one man band’ process been working for you so far?

STEVE: It’s something I’ve been thinking about for a long time and after WE STAND ON GUARD ended, Eric Stephenson gave me the opportunity to do my own book with Image and I jumped at the chance. I’ve worked in movies, doing storyboards for  the last few years and while that’s fun and I’ve had some great experiences you can’t beat creating your own universe, it’s probably more work and stress but for me it’s been more rewarding as well. Image is supportive when you need them and totally hands off with the content.

BCP: Tell us a little more about Willy, our leading man.  What’s his story?

STEVE: William Little grew up in Orlando, Florida and was pretty much regular kid until about twelve years old when his mother reveals to him that his absentee father is actually the Maestro. His father brings Willy and his mother back into his world of wizarding intrigue. He quickly realizes that being a wizard prince isn’t what it’s cracked up to be, he has over two hundred plus half siblings ahead of him for the throne and being a prince comes with zero exemptions from the often vicious and cruel discipline of magic school. He was expecting Hogwarts and instead is literally fighting for his life. He’s a nice guy in a not so nice world, eventually he defies his father and has to pay a heavy price. 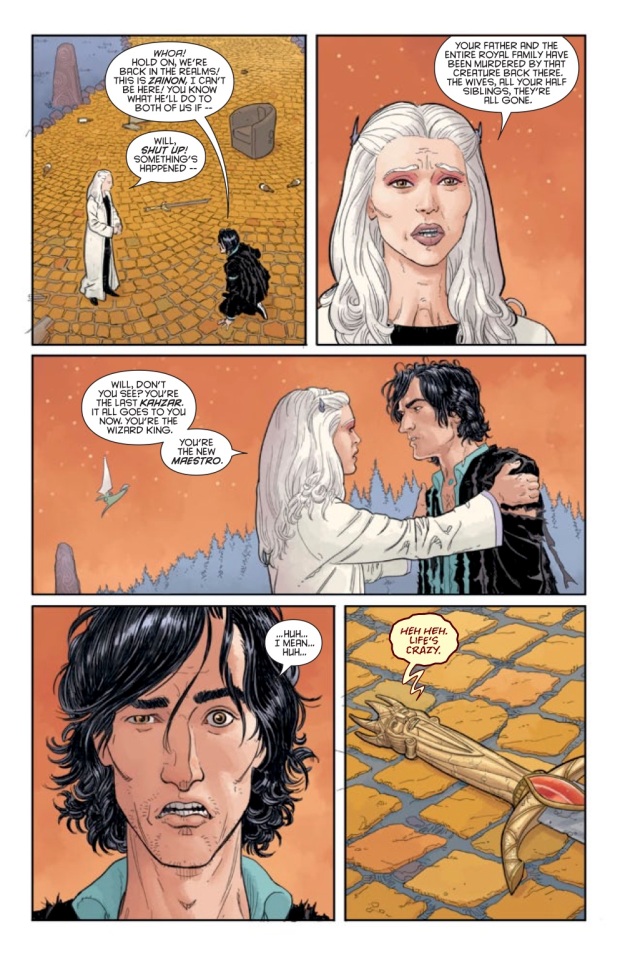 BCP: It feels like there are a lot of different inspirations swirling around here.  What fantasy and action adventure stories do you get most excited by?

STEVE: Maestros is kind of savory goulash made from everything I love about the fantasy and  adventure genres. It’s literally everything from eighties fantasy movies and cartoons to Jack Vance to Susanna Clarke to the myriad horror comedies I’ve ingested. It’s action packed, gory, romantic and comedic.  Did I miss anything?

BCP: There’s a real ‘heavy metal album cover’ vibe to the artwork, with some in-your-face character designs and loud, blaring set-pieces.  Have you made any tweaks to your existing style to better fit the tone of this story?

STEVE: It’s a fantasy story so I tried to make it magical. Heavy Metal is code for European, I think, and I love the work the of Moebius, Juan Gimenez and Françoise Boucq, among many others and the book does share a depth and detail in the artwork that European comics often  have.  I also have Dave Stewart on color and he brings a Maxfield Parrish/Windsor McCay vibe to the color art. I think the storytelling sensibility is more western though.

BCP: It’s difficult at times not to read the first issue with your mouth wide open, what with all the weird, cool and crazy stuff that’s going on.  Do you have a favourite moment in the first chapter that readers should be looking out for?

STEVE: There’s a creation myth that I drop near the end of the issue that makes me laugh and there’s an big shot Texas oilman that buys a tawdry spell from Willy near the beginning of the story that makes me smile as well. 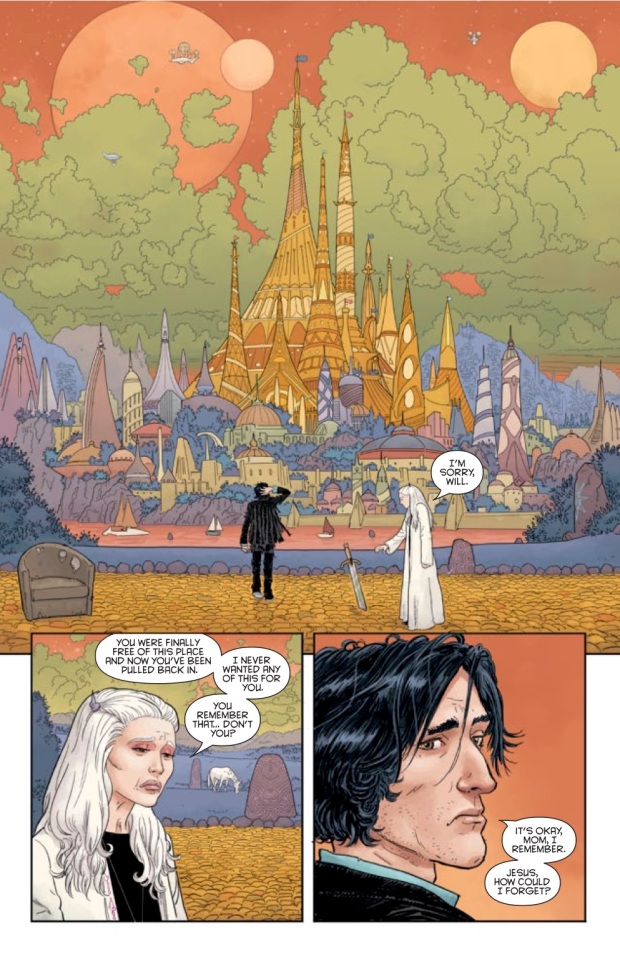 BCP: Speaking of the crazy moments – there’s some pretty wild stuff going on here for sure, but were there any ideas you had that didn’t make the cut or that you thought might be ‘too much’ for the readers?

STEVE: Definitely, it took a long time for me to come up with this thing and a lot of stuff seemed like it was too much, so things would be in and then out and so on, I revised and I revised. Then I took a second look at the more provocative, risky stuff that was maybe too much and thought ‘hey, I kinda like this and my publisher is Image, damn, comics!! I can do whatever the Hell I want!!! So it’s back in!’  Sorry, no spoilers.

BCP: What should readers expect from the series as it progresses?  What kind of direction is this crazy story headed in?

STEVE: We’ll see Willy on the throne, showing his subjects he’s a different kind of Maestro by cancelling every brutal, sadistic and draconian custom they have in the Infinite Realms, while pissing off the newly demoted wizarding powers that be. The disciplinary style of magic school is unpacked. Will reconnects with his old flame and child hood friend, Wren. She’s an indentured Wizard who belongs to Elvish Lord and Archanist, Seethrum Rygol, Will’s former wizard school headmaster and all around scheming bastard.

We’ll meet Death Mage, regicidist and disciple of Emptiness, Mardok, he’s kind of an eight foot zombie wizard who wrangles a horde of flesh eating insect monsters for his minions. ‘The Book Of Remaking” the Maestro’s crown jewel is stolen, it’s a spell that allows its user to remake reality in their own image, essentially making it’s wielder the one true God of a new age. It kind of a big deal. There’s Romance, action, Demon Kings and destruction on a planetary scale and much, much more.

BCP: And finally, if you could say one thing to someone who was on the fence about picking this one up to help convince them to give it a try, what would it be?

STEVE: No, I can’t say just one thing, how about four things? For starters issue 1 is $3.99 for 34 story pages. It’s colored by the inimitable Dave Stewart and letters and graphics are by the graphics Maestro, Fonografiks. I have five issues in the bank and I’m well into issue six of this seven issue arc. Shipping on time, anyone?

MAESTROS #1 goes on sale October 18th in print and digital from Image Comics, and you can pre-order it using Diamond Code AUG170542 until Monday September 25th.