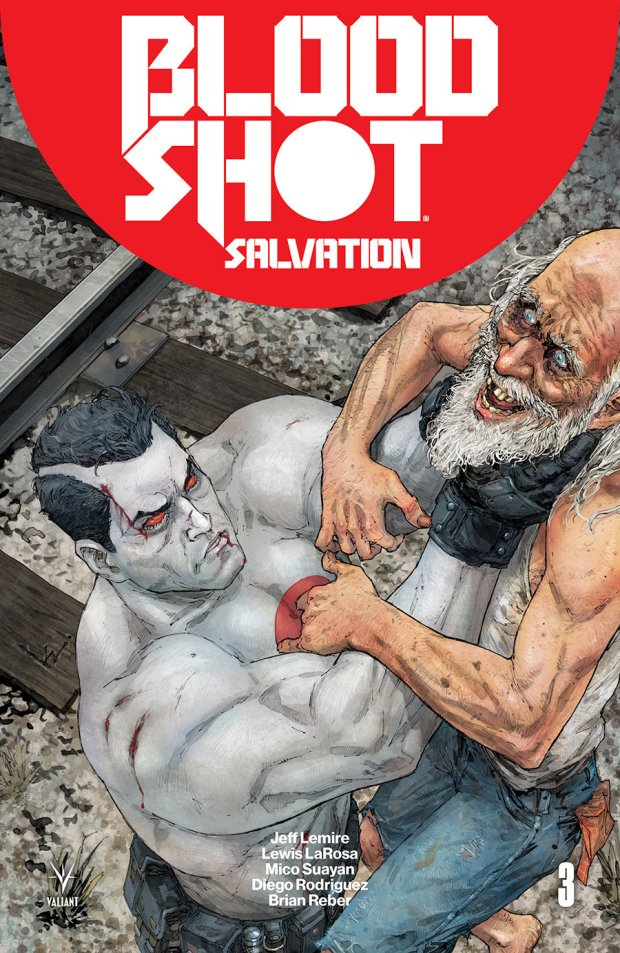 It’s been a long time since a comic has got me so excited over what’s to come, while at the same time disappointing the hell out of me. This issue of Salvation is incredible with some truly exciting reveals, the last one which – depending on how much you value continuity – will either have you fist-pumping with a ‘Hell yes!’, or consigning the comic to the bin while you go and sit in a dark place for a while. Or, if you’re like me, both.

Before I tackle that, let’s look at what makes this issue extra special. As we’ve come to expect, we continue with the dual continuity in the past/present (thought this may be getting a shakeup). There are a couple of special guest appearances too, one from Ninjak and the other from Punk Mambo. There’s just something a bit special about how Jeff Lemire writes Ninjak. He was exceptional in The Analogue Man, and although he is only briefly in this issue, he is in an incredibly Ninjak setting. I loved it. Punk Mambo’s inclusion was an interesting one, and the cliff-hanger it builds to had me grinning like the Chris Pratt Parks & Recreation meme. It’s so good, and the potentiality of it is very, very exciting.

Moving into the second side of the issue with Ray confronting Daddy; In Daddy, Jeff has a brilliant antagonist in that he’s truly frightening because of what he stands for. A legitimate fanatic, and perhaps not quite the feeble old man we first thought he was. Daddy reveals something that causes a definite eyebrow raise here. In tandem with this, the scarred man is cataloguing his requisition of all Project Rising Suns assets for what he calls “Project Omen”. Then, just as Ray is fighting off Daddy’s followers the scarred man finds something in the PRS files, immediately he uses it and… Retcon.

God, it’s frustrating. One the one hand (in the spirit of the story), it’s a fucking brilliant climax, make no mistake about it. Plus, it makes a kind of sense… and technically does fit into Bloodshot legacy, but oh boy does it frustrate me. You see, what made Bloodshot Reborn such a stellar example of how to re-imagine a character is that Jeff didn’t really change Bloodshot, he changed (or rather, developed) the person behind the character. By personalizing the character of Ray, Bloodshot was developed in a more complete sense. It emphasised the foundation, and that the story of Bloodshot is, and always shall be, a tragedy. He’ll never be what he wants to be – human, and normal, and I think fans loved Jeff for this (I know I did).

At the same time, Bloodshot never really had a weakness, a kryptonite, or the colour yellow (yes, I went there), and now he does. It’s not a stupid retcon, like Superboy punching a hole in reality and creating a multiverse, but it is one that doesn’t quite fit because it hasn’t been used to date (yet easily could have). So, if like me you are familiar with the complete Bloodshot back catalogue, this one might rankle a little. As a story vehicle, though… wow.

Mico and Lewis are on point again with the art. There isn’t really anything about these two giants that will give you cause to complain. Mico’s art with Brian’s colours are wonderfully dark (both atmospheric as well as being night), and they make for the perfect intro for Punk Mambo. It’s a hero shot that is just ridiculously Punk Mambo in nature.  In fact, all that is missing are a few spider webs. Lewis isn’t left out with the switch to Ninjak that simply oozes with suave confidence, it’s a panel that just makes the reader smile. We’re also treated to one of Lewis’s Ray/Bloodshot dual panels that fits the end of the comic damn perfectly.

So yeah, a totally conflicting issue in its absolute brilliance. If you’ve only picked up Bloodshot since the Reborn launch you’ll unquestioningly love this edition.  If you are a legacy Bloodshot reader you’ll unquestioningly appreciate this issue, but you might not necessarily like it all. Just don’t do something silly like rip this up in frustration, because I’ve got a feeling that in years to come this will be an issue collectors will be looking out for.