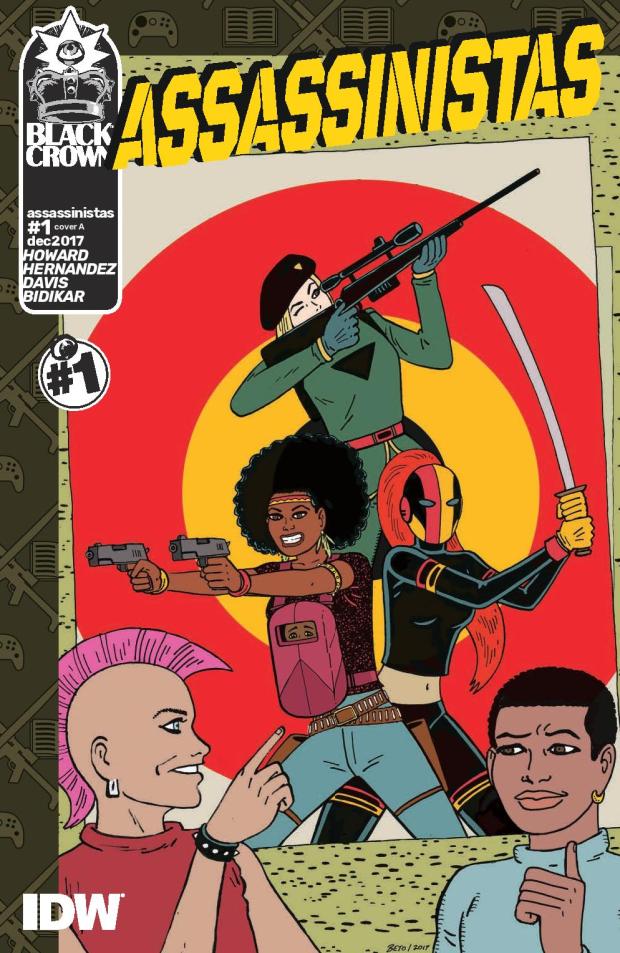 Based on the cover and the set-up delivered during the opening pages, Assassinistas – the latest offering from Shelly Bond’s “Black Crown” imprint – initially appears to be a slick, sassy action series about a trio of ass-kicking female killers for hire.  Which would be no bad thing, right?  Especially with rising star writer Tini Howard at the helm alongside a liberal dose of the distinctive ‘Love and Rockets’ visual style of Gilbert Hernandez.

However, just a few pages in, Assassinistas changes into something else entirely, and I absolutely love it.  Howard hurls us an unspecified amount of time into the future  to find our ass-kicking trio having to dealing with teenage children at college, babies on the way, bills mounting up – y’know, grown up stuff.   Well, two of them are, anyway.  The third we’re not so sure about, and that mystery is likely to provide the main driving force of the series, especially given what transpires in this first issue.

But more than just a mystery or a slick action adventure, Assassinistas also has an intriguing family dynamic at play, particularly between the grown-up Octavia “Red October” Price and her teenage gay son Dominic, who hasn’t quite opened up about his sexuality to his ex-killer mother.   Howard’s dialogue flows well throughout, from the relatable exchanges between Octavia and Dom to the edgy banter between the three Assassinistas themselves.

It’s also great to see Hernandez delivering the goods here, channeling every bit of the charm and expression that took him all the way to the Eisner Hall of Fame.  His stripped-down, occasionally awkward-looking style may not necessarily be to everyone’s tastes, but there’s just something about the amount of understated emotion he manages to pack into his characters that easily overcomes overcome all the ‘lack of detail’ in the world.

With a diverse blend of humour, drama and mystery, Assassinistas has exploded out of the gate with a strong opening issue.  We instantly care about the characters, and with such a compelling story being dangled in front of us, you’d be hard pressed to find a reader who didn’t instantly want to pick up the second issue after reading this one.