It says a lot about how brilliant a concept John Wyndham created in his novel Day Of The Triffids that even a patchy film adaptation can still impress.

Playing fast and loose with the original book’s plot, director Steve Sekely and an uncredited Freddie Francis create a nightmarish vision of a post-apocalypse Europe, one where the majority of the populace are blind, helpless to defend themselves from not just the killer plants in their midst, but from their fellow sighted people too. You know the drill.

Bill Masen (Howard Keel), is an American merchant navy officer recovering from eye surgery in a London hospital who becomes one of the few people on the planet not rendered blind by a spectacular meteor shower.

With the world in anarchy, things get even worse with the re-emergence of the Triffids, previously discovered plants of extra-terrestrial origin themselves, but now in a new, terrifying form. Bigger, carnivorous and mobile, the Triffids are roaming the land in search of their now-defenceless prey-man. 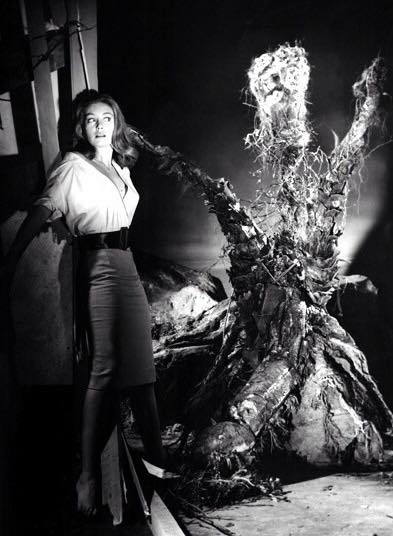 Meanwhile, in lighthouse off Cornwall, scientist Tom Goodwin (Kieron Moore) and his wife Karen (Janette Scott) are trying to find out how to stop the creatures, but they’re trapped and the Triffids know they are in there…

Okay, so it’s not the best adaptation, not by a long chalk, but there’s more than enough going on here to make this worth checking out.

Although it strays pretty far from Wyndham’s story, the brilliant central premise remains as does, for the most part, the opening scenes. Watching our lead character wAnder around a London devastated by the meteors is a wonderfully eerie experience. It’s not completely deserted (ala 28 Days Later/ The Walking Dead), it’s actually and indeed plausibly, swarming with panicked, sightless Londoners, which only adds to the feeling of hopelessness and unease, while the scene of the Doctor calmly throwing himself out of a window (Wyndham’s again) is genuinely shocking, even now.

The rest of the run time is more of an uneven beast though. There’s some great scenes, such as the stiff upper lip of the blinded and very doomed flight crew, the first proper Triffid attack after half a film of tension-building and all the set-pieces in the lighthouse. The Triffids themselves are wild-looking things and make for effective monsters.

There’s a nice allusion to man being just as predatory given the chance when a gang of convicts take over the French Chateau Masen and his new ward Susan (Janina Fay) have sheltered. Immediately forcing all the women to dance”, it’s an obvious metaphor for something else, reinforced when the blind Bettina (a pre-Doctor Who Carol Ann Ford) is forcibly dragged upstairs by one of them. Nasty.

Weirdly, the two plots never intersect or affect each other in any way, not surprising as the lighthouse scenes were created by Francis as an afterthought by the producers who felt the film needed a subplot, more action and…a happy ending.

Yes, there’s a happy ending to this apocalypse and it’s just as trite, unlikely and pointless as that sounds and only adds to the 50s B-movie vibe that the film so often resembles.

The Day Of The Triffids is not a great film. It’s often aimless and lacking a strong narrative, but it’s source material is so incredibly strong that even a loose and at times lacklustre adaptation can still thrill, disturb and mesmerise at various points.