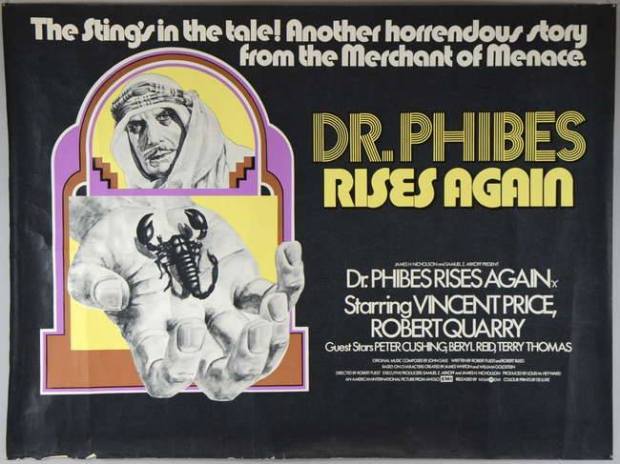 1971’s The Abominable Dr Phibes was a unique affair. An art-deco, operatic biblical revenge thriller, there wasn’t much else like it at the time and there hasn’t been much like it since.

Well, apart from Dr Phibes Rises Again, that is. Saying that, even this, it’s rapidly-pulled together sequel, still doesn’t feel like it’s cut from exactly the same cloth.

Three years after his biblical plague-inspired murder spree against the “killers” of his beloved wife Victoria, Dr Anton Phibes is back from his exsanguination-induced suspended animation.

Recalling his silent assistant Vulnavia, Phibes plans to take Victoria’s body to a hidden temple in Egypt, under which flows the River Of Life, promising resurrection for her and then immortality for them both.

Seeking the same goal though is Phibes’ rival Darius Biederbeck (Robert Quarry), who has already lived for centuries through the use of a special elixir.

With eternal life the prize, Phibes and Biederbeck go to war as they travel from England to Egypt, but the nefarious Doctor has been stocking up on elaborate death traps and nothing will stop him from bringing his wife back from the dead…

As much grisly fun as the first film was, Dr Phibes wasn’t exactly the hero, but that’s pretty much what writer/director Robert Fuest (alongside co-scripter Robert Blees) pitch him as here.

He’s still a psychopathic killer with more than a touch for the theatric, but the camera is definitely looking kinder upon him this time around. Having an actual archenemy, like a superhero would, certainly helps and Robert Quarry (Count Yorga, Vampire, Sugar Hill) plays that role to perfection, with lots of oily charm and sneering mannerisms.

Obviously the natural charisma of Vincent Price sells this idea massively too. It’s a humorous role at the best of times, so it doesn’t take much softening to pull him almost entirely away from the villainous role. He’s magnificent as usual obviously, conveying every emotion mainly through his eyes and flourishes of movement, as he acts along with his own, recorded voice-over.

His entrance alone is so over the top it’s laugh out loud funny, while the inherent silliness of his colourfully lit-up organ rising up on its hydraulics not to his beautiful underground lair any more, but to the rubble of its demolition site is played completely straight, which only adds to the humour. Best of all though, the murder of Biederbeck’s manservant is an absolute riot, taking in a robot snake and a telephone with a kebab skewer on a spring. Yes, really.

There’s no shortage of beautiful sets and designs either. From the stunning Art Deco of Phibes’ berth on the boat to Egypt and Victoria’s actual Rolls Royce glass coffin to the succession of ornate death traps and the eventual grand set-piece finale of the hidden temple, this is every bit as visually stunning as you would expect.

The one major flaw in Dr Phibes Rises Again is the recasting of Vulnavia. With Virginia North pregnant and unavailable, Valli Kemp stepped in, but plays her as a wide-eyed mute, childlike at times and lacking in grace somewhat as she glides around the place. It’s a far cry from North’s original reading, who gave Vulnavia a mesmerising, otherworldly quality that made her feel, if not Phibes’ equal, certainly more than a pretty lackey.

The other main issue with this one is the fast and loose playing with continuity from the last film. Victoria was dead, not in suspended animation. That’s why Phibes was killing all those doctors and nurses, no? For killing his wife? And for that matter, Vulnavia appears to have got over that small matter of the fatal acid blast in the face pretty quickly. Hmmm.

It’s easy to forget these little things though, as while there isn’t quite as many inventive deaths as before, there’s a fair few and a fair few quality guests popping up to keep you entertained, such as Peter Cushing, Beryl Reid and Terry Thomas, who are all credited as “Interested Parties”.

Dr Phibes Rises Again has a lot going for it and is a respectable sequel, but it’s also one that pales into comparison with its predecessor. It’s still a lot of fun though and makes for one horror’s most enjoyable double-bills.