It has been a fairly hectic three years for IDW’s Transformers line. However, after seeing the ‘Bots face cataclysmic event after cataclysmic event in Combiner Wars, Titans Returns, Revolution and First Strike, it’s commendable just how fresh and exciting Optimus Prime’s penultimate arc, “The Falling”, has been.

In its tale of an old Prime coming to Cybertron to usurp and destroy everything Optimus and Co. have built in the last 5 years, Barber has used this familiar enemy to weave a strong narrative core that harnessed the series’ strengths. A clash of politics and ideology dating back to the fundamentals of the Decepticon/Autobot cause, a focus and extension of the deep lore and history of this universe, and a full six-issue arc that dedicated itself to examining the reactions and consequences this event has had on its cast of already shaken ‘Bots.

There are a lot of great things that have come out of “The Falling”, and I believe it’s an arc we won’t soon forget.  However, this only makes me sadder to report that it doesn’t quite stick its landing. In this concluding issue, the final pieces remaining on the board are vying for control. Victorion faces off against Devastor, Arcee goes against Liege Maximo, a renewed Starscream guns for leadership yet again, a broken Soundwave decides his future, and the desperate need for Optimus and Bumblebee to return to help save Cybertron is made all the more clear in face of Shockwave’s final stand.

Separating the issue into all its different parts, it possesses  a lot of the stronger elements Barber has placed through-out his run.  With Victorion taking place as narrator this issue, there’s a lot of great commentary and focus on the myth and role of the Prime, and the fallibility of leadership in times like this. This choice also serves as a perfect way to showcase just how far Barber has come in his deconstruction of Optimus and Cybertron as a whole over the course of this series.

We see Shockwave’s scheming and villainy brought to a head showing us just how far he has come as both a character and a threat. With so much depravity and assuredness in his history-shattering plot, I audibly called him a wanker as he revealed some new way to torture Prime and his empire.

The issue also delivers ferocious battles paired off with the great inner conflict Optimus’s crew are faced with about the decisions needed to change their fate, making it feel suitably climatic with their decisive ends and character defining moments.

Characters rise, fall and forever change on this battlefield. Victorion has never felt stronger a character, Arcee has one of my favourite moments (winkwink), Soundwave and Starscream are somehow foraging whole new paths for their conflated and conflicted characters, all of which provide some genuine stand-out moments for this book’s finale before Unicron takes over.

But it’s when you put all those pieces together alongside the setup for the Unicron miniseries that has, for the most part, positively pushed this series forwards, that we see this issue’s downfall.  What could have possibly been an even longer arc, with more time to devote to the fallout of these events, is cut suddenly short in the need to wrap it all up and ship these characters off to Unicron.

And while obviously this arc was always intended to, and does in essence, place itself as the prelude to Unicron, it feels like Barber was left with too little time to cram in so many ideas and plot points to help get to where these characters needed to be.

What begins as an issue that feels solely focused on delivering those fantastic character beats and action set pieces quickly devolves into a cluttered, exposition-laden tail end that has to wrap everything up into a neat finish in so few pages.

Set pieces and plot threads suddenly have to end, Shockwave is quickly moved into the status quo needed to face Unicron, and revelations that would have, in previous issues, be given full pages of action and reaction, are delivered in single panels where the only reactions that can be given are by an audience who may not feel the weight of its anticlimactic reveal.

On the visual side of things, it’s probably to be expected by now that putting Ramondelli, Zama and Pitre-Durocher in one issue would lead to nothing but brilliance.  A lot of thought has obviously gone into balancing all three different styles, allowing them to show off their strengths and blend together in this fast-moving issue.  And, whether it’s those massive battles rendered in full, kinetic pages, the world-bending machinations and powers that have built this conflicted being given explosive coverage, or the ethereal nature of those worlds and events contrasted, it’s all meticulously drawn and crafted by three incredible, and distinct, talents.

There’s no doubt that this issue holds a spark of brilliance in its pages. We still have those familiar character-defining moments, full-scale conflict and the inner turmoil of the characters we love, ensuring that the best points of Barber’s work is still captured here.  But the sudden, cluttered and anticlimactic ending where everything is so quickly (and uncomfortably neatly) tied up provides a slightly unsatisfying conclusion to an arc that has promised, and for the most part delivered, so much. 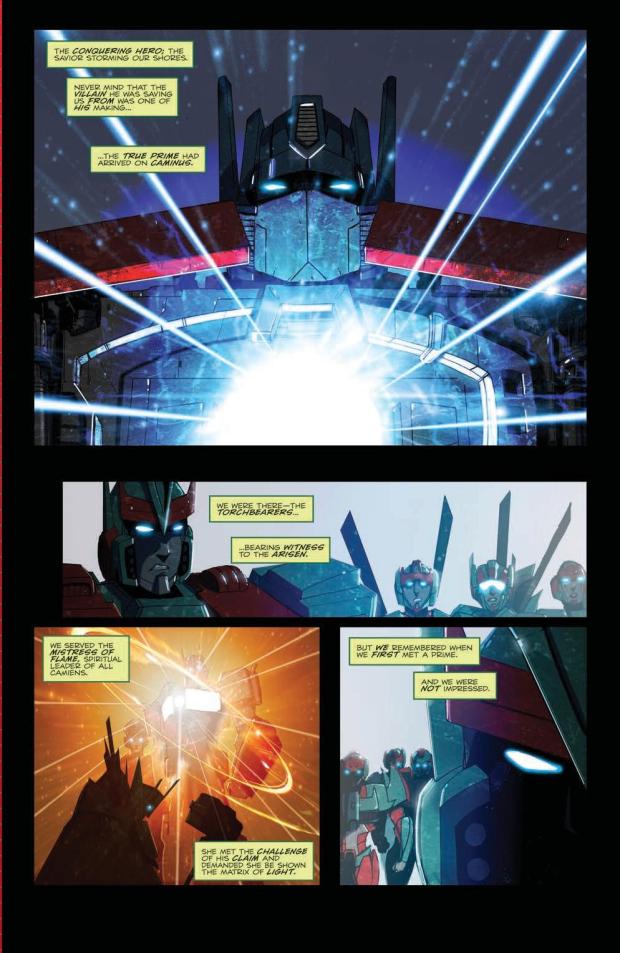 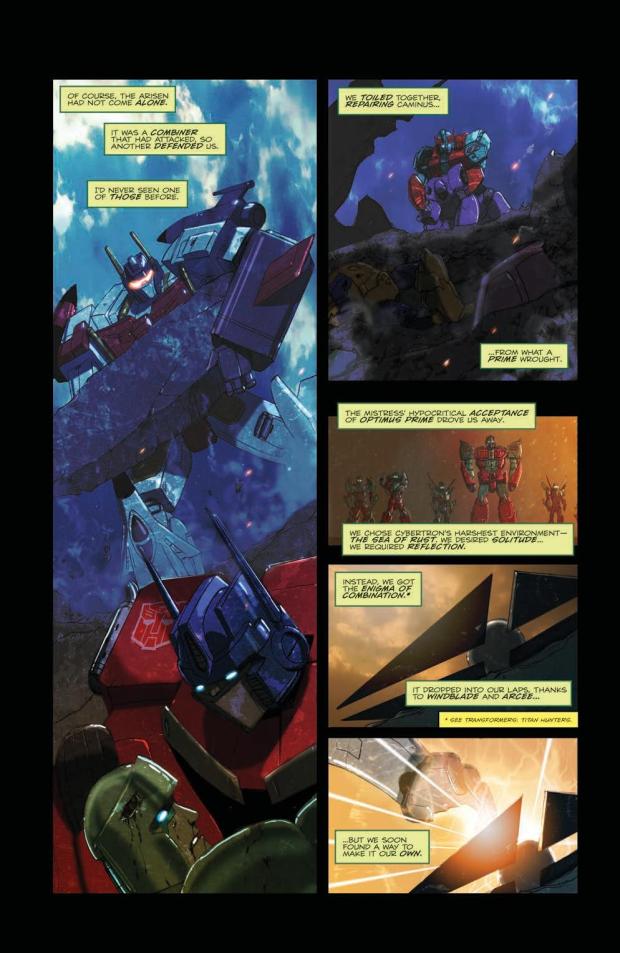 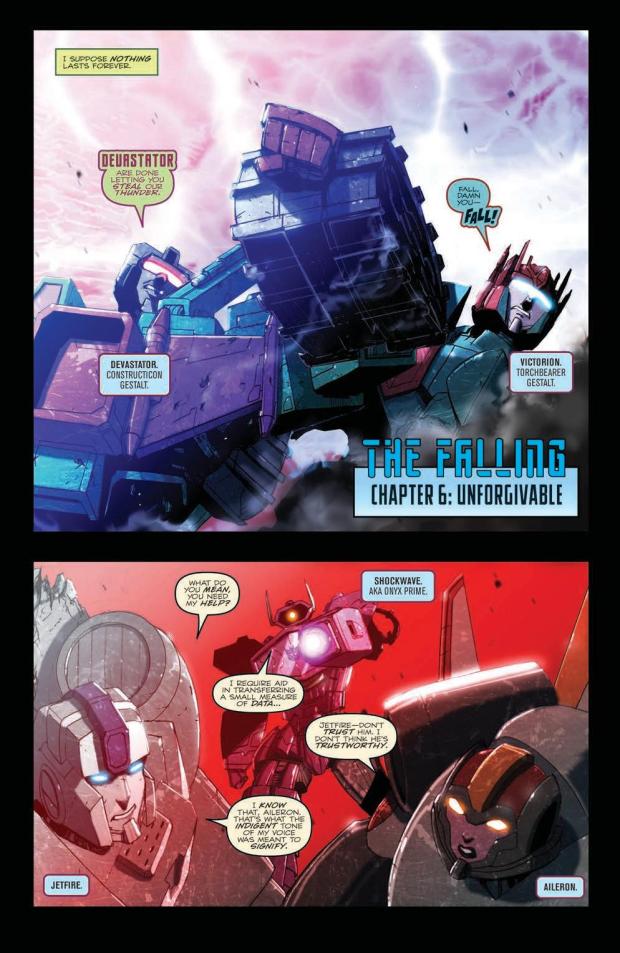