After calculating his odds of surviving the tender clutches of Amanda, Nathan Bright has escaped and is relying on his own survival instincts to get him through. Nathan’s alter ego, Ian Black, would have been in his element, he would have disappeared into the shadows never to be seen again but, unfortunately as the Nathan Bright persona, he has the self-preservation skills of a lettuce so hunting him down is as simple as staking out the local Brutal Noodle joint.

With Nathan in mortal peril, it’s a race against the clock to get him back before something unimaginable happens to the people of Mars. Amanda has to swallow her pride, and kill a surprisingly large number of armed men in order to ask for help from the last person she wants to ask, and she’ll be really lucky if he doesn’t just shoot her on sight.

Every time I pick up an issue of The Weatherman I’m blown away by how well written the characters are and how easy it has been to become invested in their wellbeing. As such, it’s no surprise that every issue Jody LeHeup manages to get at least one scene in that completely breaks me. In a dream sequence that is a totally undisguised homage to Terminator 2 we are shown exactly what The Sword Of God actually did to the people of Earth and it’s truly horrifying.

There was a brief moment during this sequence where I genuinely hated Nathan Fox as his depiction of the event knocked the wind out of me in a way that hasn’t happened since the death of Lori & Judith in The Walking Dead Comics. Ever since I became a father I’ve had a real weakness when it comes to anything to do with small children and this was no exception. I will of course forgive Mr. Fox (eventually) for the counselling I’m going to end up needing at some point because, at the end of the day, his art is just too damned good!

Not everything in this issue is bleak and doom and gloom, though. There are some fantastic action scenes and some real laugh out loud moments that give a pleasant and welcome relief from the tension. This is a story that I firmly believe has everything you could possibly want all in one well crafted bundle. The Weatherman continues to be, in my opinion, one of the best comics of 2018 and only I hope that I can continue to find enough superlatives to do it justice. 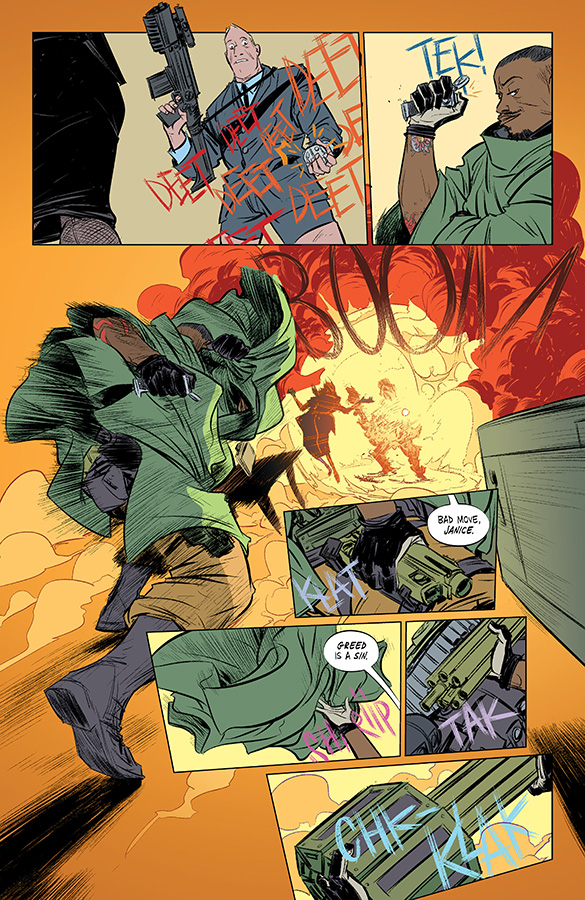