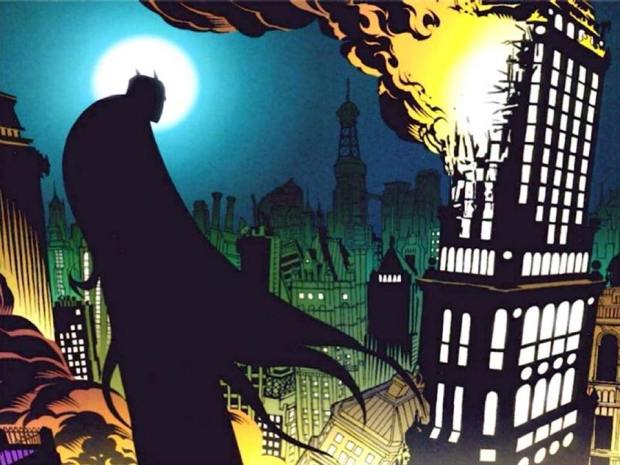 From earthquakes and plagues to man-made nightmares, Gotham City didn’t have it easy in the 1990s.

No matter what you throw at him, he’ll find a way to deal with it. The Joker, Ra’s Al Ghul, Two-Face, they might cause havoc, but there’s only going to ever be one winner in the end. Sure, Bane broke his back and left him crippled, but Azrael put him in his place before normal service was resumed as Bruce reclaimed the cowl. It might take him a while, but Batman always wins.

In the second half of the 1990s though, the Bat-office went through a phase of upping the ante, pitting the Dark Knight against a series of events that if not rendering him powerless, certainly were out of his comfort zone.

As well as the ever-present rogues gallery, Batman was now going to be tested by natural disasters, man-made plagues and his city being sealed off and abandoned by the Government. All of a sudden, being the World’s Greatest Detective wasn’t going to be enough.

The first disaster to befall the city came in the shape of a microscopic organism, a strain of the Ebola Gulf A virus known as “The Clench”.

A man arrives in Gotham to warn the city of the impending outbreak, little realising that he himself is infected and it’s not long before the disease has spread like wildfire. What initially looks like flu-like symptoms soon has sufferers bleeding from the eyes, nose and every other orifice before succumbing to the most unpleasant of deaths. Laughing gas, this isn’t.

With the entire stable of Bat-books involved, Robin, Catwoman and Azrael end up on a globe-spanning quest to find a Clench victim survivor in the hope of fashioning a cure from their blood, while back home Batman, Nightwing and Huntress try to keep order in a disease-ravaged city that’s fallen into chaos.

Drawing on the then-topical fear of Ebola Gulf-A for inspiration, the (supposedly Chuck Dixon-run) Contagion brought a very real-world issue into Batman’s world. Sure, it was one that would turn out to be just another pandemic paranoia being stoked by the media (bird flu anyone?), but at the time the idea that major cities could be ravaged by such a catastrophic virus was horrific.

Contagion used its multiple titles well, with the race-against-time mission over in Azrael coming over like a James Bond story, while back in Gotham, Kelley Jones and Doug Moench were perfectly placed to convey the horror unfolding as The Clench took hold.

There’s a real feeling of high stakes throughout Contagion, as there’s no real masterplan to be foiled, from the heroes fail, everyone in Gotham (and potentially beyond) dies, assuming the city hasn’t torn itself to pieces before that.

Batman as a title is often at its best when Gotham feels like a living, breathing city and it’s very much that in Contagion. From the one percenters in their supposedly infection-proof ivory tower (newsflash- no it isn’t) to the ordinary Joes in the street driven mad by fear of the impending pandemic that they’ve taken to the streets in an angry mob, there’s a real feeling of life on show here. Gotham is sick, potentially terminally so, with how its various inhabitants react to the crisis the difference between life and death.

More than anything, what really sets Contagion apart from anything that’s come before is the overwhelming sense of helplessness that we see affect everyone from Batman down. This isn’t an enemy he can punch in the face, or outwit by predicting its next move. His city is dying and in the end, it’s circumstances outwith his control that save the day.

An aside, Contagion also features one of the best moment’s in Batman history, with the Dark Knight in full-on demonic mode, commanding the rioters to stop what they’re doing and go home. Who’s going to argue?

If the Clench weakened Gotham at the knees, this was the killer blow to the head.

Still very much feeling the aftermath of the Ebola outbreak, the last thing the city needed was another large-scale crisis, but a full-scale earthquake was worse than anyone could have imagined.

It’s just an average-sized quake either, more a shifting of tectonic plates “on a biblical scale” that absolutely devastates the city to a horrific degree.

There’s a lovely little intro with a seismologist realising what’s about to happen, but the 7.6 quake hits pretty much without warning and a good half of the story is seeing the various members of the Bat-family cope with the initial impact.

Batman is trapped in the Batcave when Wayne Manor is practically torn in half and falls in on it, Nightwing arrives from Bludhaven by boat to the nightmarish sight of his home city in ruins and, on one of the most harrowing scenes, Catwoman’s humanity is tested when she is faced with the choice of helping victims rather than just herself. 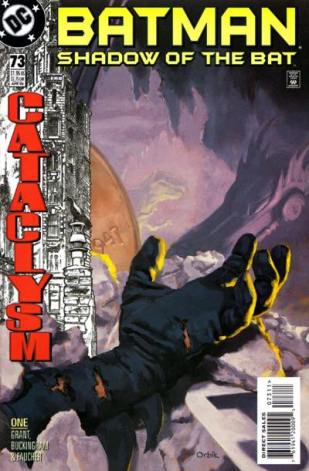 The horror of an earthquake on the middle of a densely populated city is laid on thick, with each title in the crossover focusing on different effects and situations caused by the tremors, from people being trapped in underground fissures that begin closing up again to the bizarre liquefying of concrete streets.

There’s no real villain in Cataclysm, Azreal pursues Bane across the devastation in one issue and a new face called The Quakemaster takes credit for the cataclysm, but more than anything this is a story about the destructive power of nature and how helpless even a hero like Batman is against it.

If anything, the real horror of the Cataclysm came after. The initial crossover was all about the earthquake itself, all visceral action and drama. In the Aftershock stories that followed, Gotham City was shown to be on its knees, with no quick recovery or solutions to the horrific situation they had found themselves in.

Flooding, fires, cholera, no water or power, starvation and even cannibalism, the nightmare scenario didn’t end with the earthquake. Before long, an exodus of refugees began, rising constantly in numbers as the weeks following the disaster went on.

On paper, it’s a ludicrous idea. The idea that the American government would wash it’s hands of one of its largest cities and end up walling in anyone unfortunate enough not to get out in time is pretty far out there.

Once you start to think about it though, it’s not that out there. You just need to look at the Government responses to natural disasters like Haiti, Katrina and most recently in Puerto Rico to see how bad it can get, making the jump to No Man’s Land not too far in the land of fiction.

It’s a brilliantly realised idea too. Owing more than a little to Carpenter’s Escape From New York, we’re dropped into the NML several months after the borders were sealed, allowing us to see just how society has evolved when everything changes. 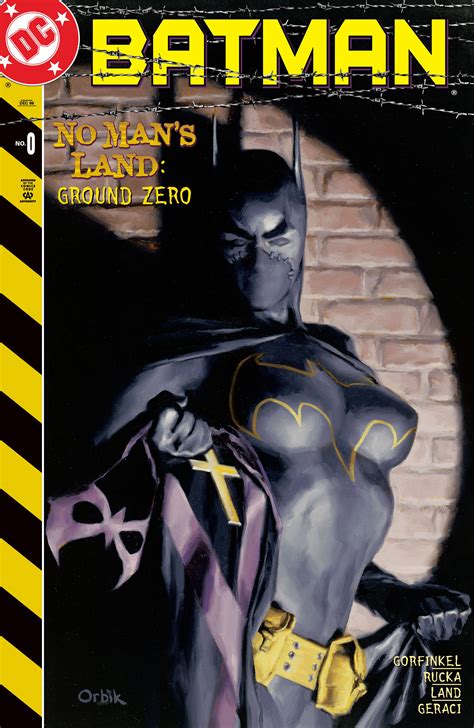 The American government has washed its hands of Gotham City, destroying all bridges leading to the island and setting up a military blockade to prevent people from entering or exiting. No one gets in, no one leaves.

Money is completely worthless, with batteries, fresh fruit and warm clothing becoming the new currency, while bullets are immediately at such a premium that clubs and arrows replace them as weapons of choice.

It’s not quite society reverting to the Stone Age, but it’s not far off. With no official law or government, a feudal system emerges, with each area of Gotham controlled by villains like Two-Face and Mr Freeze or gangs such as the Lo-Boys and Street Demonz, with one oasis of safety the turf of a new gang, the Blue Boys, essentially Commissioner Gordon and what remains of his GCPD.

Over the course of a full year of weekly issues, the horror of this new primitive and tribal society is examined in forensic detail. Predators like The Joker and The Penguin thrive, the former as the chaos is his natural home, while Oswald comes from a more pragmatic angle, organising auctions and entertainment while making himself rich in the meantime.

New characters appear like Batgirl and Harley Quinn, but it’s seeing how the faces we know and love respond to life in the NML that really makes this epic work. Gordon’s year long battle to slowly reclaim the streets piece by piece is riveting and is paralleled by his slowly-repairing relationship with Batman over the piece. Why? Because the Dark Knight himself was missing for the first three months of the lockdown, leading his former friend and ally to not even allow his name said out loud.

Unlike the previous disasters, Batman and his team have plenty of the rogues gallery to deal with, from A-listers like Joker and Two-Face to Mr Zsasz, Killer Croc, Bane and even Lex Luthor making claims on the devastated city, but they are just a symptom of the real horror that’s befallen the city.

It’s a sprawling, messy epic at times, but it’s such a huge idea that it feels appropriate that you get overwhelmed at times. Society has crumbled and everything you take for granted is gone. No Man’s Land offers a glimpse into just how close we all are to chaos and barbarism and it’s a sobering thought.