The Black Label, a new mature brand for A-List talent at DC was announced to all the hype possible, promising to allow the publisher’s best and brightest to tell any story they want. And, as with everything DC related, it all starts with Batman.

Batman: Damned is Brian Azzarello’s take on a Supernatural Horror comic and, of course, a book like that needs my favourite occult hero: John Constantine. But is this monster-sized book worth all the hype that DC has put into the Black Label? Or is this new line for DC off to a disappointing start?

The Joker is dead. Batman wakes up in the back of an ambulance near death. After seemingly dying, he wakes up with healed injuries and one question. Did he finally snap and kill the Joker? But Batman has problems of his own, because he can’t actually remember his battle with the Joker, and the dead and impossible are haunting him.  And what of John Constantine? What part does he have to play in this madness, and is he friend or foe?

Reviewing this issue is interesting for me because while it’s the start of a massive new label for DC with a lot of hype behind it, I usually don’t like Batman. Sometimes he works for me, but I just don’t find the majority of his stories interesting. I’m happy to say though that Azzarello and artist Lee Bermejo have made something truly compelling, whether you’re a fan of the Caped Crusader or not.

The book revolves around an engaging mystery. Did Batman snap? Since we get information at the same speed as the Dark Knight himself, the mystery is utterly immersive and we never feel like any information is being withheld from us. Further complicating things is the use of John Constantine as a self-described unreliable narrator, making us question if the events we’re seeing unfold are accurate in the slightest.

As much as Azzarello’s writing works well here, Batman: Damned wouldn’t be half as effective without the simply awe-inspiring work of Lee Bermejo. Every panel bleeds atmosphere, with a painted and gritty yet somehow ethereal look that encourages the reader to question this book and the way it shows events. His work truly gives this issue a mood and atmosphere worthy of a label designed for A-List talent.

And don’t get me started on the masterful use of colour, with ever panel practically dripping with the contrast from the deep reds to pale blues. It’s simply a treat for the eyes.

Honestly, I don’t think I’ve enjoyed a book from Azzarello this much in a very long time. This is a spectacular start to the Black Label and proof of DC’s commitment to delivering the best the industry can offer for a mainstream comic reader. From the skilful writing to the truly award-worthy art this is masterful work. Give this a read because I have a feeling that we’ll all be talking about this one for a long time to come. 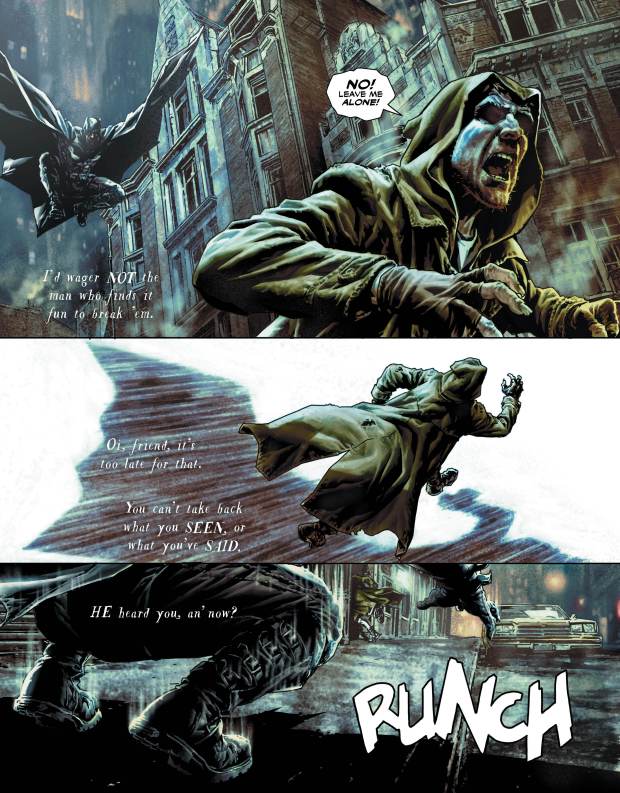