If it’s a month with 31 days in it, you can be sure that Jules will be firing out the horror movie reviews.

There’s no film that sums up the growing undignified treatment of the classic Universal horror characters more than House Of Frankenstein.

After bringing The Wolf Man and the Monster together in their last outing, the studio decided to throw as much into the mix as possible, dropping Dracula from a great height to add to an already convoluted plot. Sadly Bela Lugosi reportedly had a commitment to play Jonathan Brewster in road show version of Arsenic and Old Lace when the film was in production, despite being originally announced for the part of Dracula in the trades when the film was announced under the title Chamber of Horrors. Enter John Carradine. Briefly.

Initially The Mummy, The Mad Ghoul, The Ape Woman and The Invisible Man were tipped for an appearance at various points too, but given how much screen time Dracula and Frankenstein’s Monster actually receive, we can be thankful for small mercies that they didn’t find the space for them.

Make no mistake, a film featuring these characters should write itself. A monster mash with the (at the time anyway) Big Three of horror. Instead…we get House Of Frankenstein.

Dr. Gustav Niemann (Boris Karloff) escapes from prison along with his hunchbackedassistant Daniel (J. Carrol Naish) with a plan to take his revenge on the three men responsible for his conviction.

After murdering Professor Lampini (George Zucco), a travelling showman and taking over his circus, Niemann uses one of the attractions to dispose of the first person on his list: Bürgermeister Hussman (Sig Ruman). That attraction just happens to be the skeletal remains of Count Dracula (John Carradine), who after being revived by Niemann seduces Hussmann’s granddaughter-in-law Rita (Anne Gwynne), kills Hussmann and dies once again himself when his coffin is exposed to sunlight. 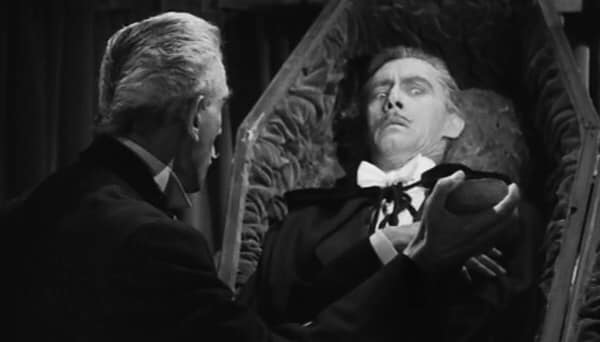 Niemann and Daniel move on to the ruins of Castle Frankenstein, where they find the bodies of Frankenstein’s monster (Glenn Strange) and Lawrence Talbot, the Wolf Man(Lon Chaney Jr.), preserved in ice in the depths of the frozen castle. Niemann thaws them and promises to find Talbot a cure for the curse, but secretly he plans to use the monsters to enact his final revenge…

God, this is a shambles of a film.

It’s starts well enough, with the return of Boris Karloff strangling a prison officer through the bars of his cell. No-one does gravitas like Karloff and you are instantly convinced of his character’s intensity, his lack of morality and obsessive interest in the work of the Frankensteins. The man is on fine form here and lulls you into a false sense of security that we’re in for a sold tale here.

It’s when Dracula pops up as a fairground attraction that the wheels start to come off. Admittedly the effects of a nervous system and flesh growing back over his bones is pretty marvellous, but the finished product is the skinny and far from scary John Carradine and it just doesn’t work. His idea of playing the Count is to widen his eyes and glare, while having no physical presence at all. He’s neither intimidating or alluring, coming over more like a random toff with his top hat on at a jaunty angle.

Worst, is he’s nothing more than a disposable henchman and is despatched a bare 25 minutes into the film. From casting to usage, it’s an absolute waste of one of the greatest characters in horror.

Really House Of Frankenstein is like two films smooshed into one, or more like a series of tv episodes linked by the narrative of Niemann seeking his revenge as the Dracula plot is dropped early doors for a journey to the village of Frankenstein for the next part of his dastardly plan.

Never mind that the notes and monsters he’s seeing were last seen being supposedly destroyed under Ludwig Frankenstein’s castle in Visaria, continuity is the least of our worries here.

Lon Chaney Jr is his usual amiable self in his signature role as the cursed shmoe Larry Talbot and his relationship with Ilonka (Elena Verdugo) the gypsy girl comes over as sweet and genuine, while Glenn Strange does what he can with his whole 4 minutes of screen time at the arse end of the film as Frankenstein’s Monster. Seriously. Four minutes. He doesn’t even get any screen time with The Wolf Man, who’s been shot with a silver bullet *offscreen* after running out of the house for the second night in a row like a poorly-trained Jack Russel. Sigh. 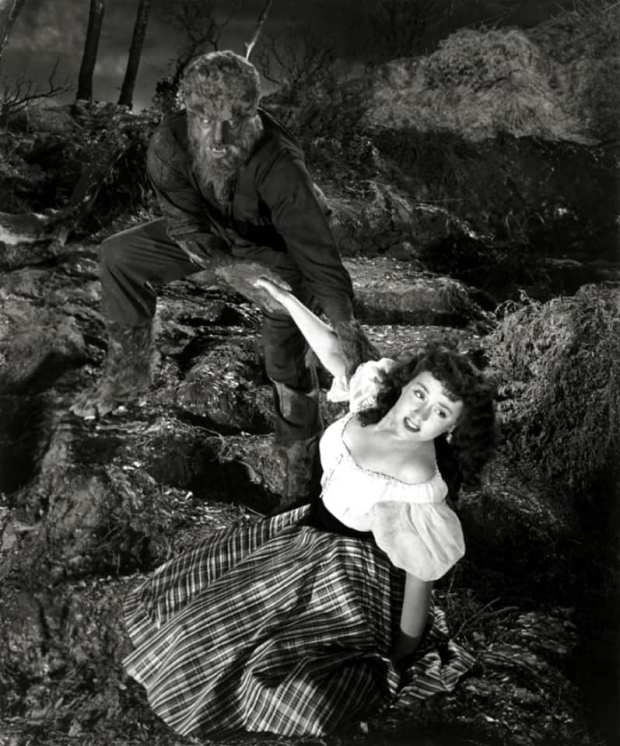 Perhaps the worst thing about House it Frankenstein is Niemann’s outrageous endgame for his revenge. He’s going to punish Herr Strauss (Michael Mark) by putting the Wolf Man’s brain in his body, thereby cursing him with lycanthropy, while Herr Ullman’s (Frank Reicher) brain is going into The Monster. Oh and The Monster’s brain (which should still be Ygor, no?) is going in Talbot’s body to “cure him”.

It’s absolute bunkum and makes no sense at all. In fact, it hurts your head to even think about it, never mind how it’s all meant to work. The Wolf curse can be passed on with brain transplants? Larry can be cured by replacing his brain with someone else?? Urgh.

Three huge, famous, iconic horror creations in one film should be an open goal, but man, do they miss a sitter here. Dracula is a warm warm up who had very little to do before being discarded, the Monster gets to growl for a second and get chased into quicksand and The Wolf Man is given great reign to kill. Amazing.

I truly, truly love these characters and my bar is fairly low for what I’ll expect, but this is just misfire after misfire. It’s bleak, it’s depressing and everyone involved deserved so much more.