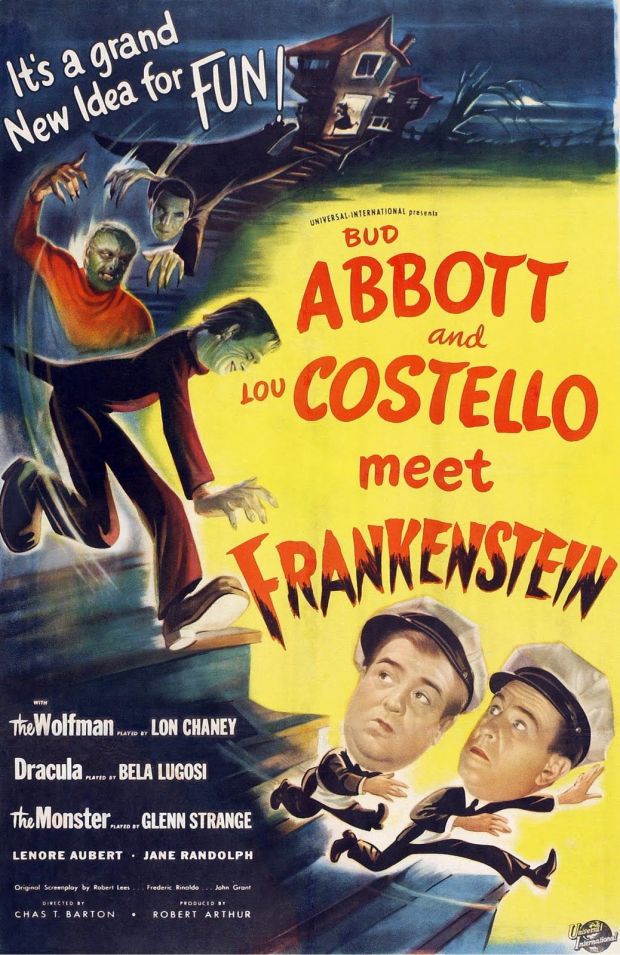 “In half an hour’s time the moon will rise and I’ll turn into a wolf.”

The Universal monsters had been dead men walking in more ways than one for a good few years, but this was the final nail in the coffin.

The public had lost interest, Universal didn’t know what to do with them and possibly didn’t care and even the comedy duo of Bud Abbott and Lou Costello had to be strong armed into making this film with them.

An out-and-out comedy featuring the biggest three horror characters in the world in what would be their final outings for the studio, Abbott And Costello is one of two things. It’s either a disrespectful and ignominious end for Dracula, Frankenstein and The Wolf Man, or its making the most of their diluted brand and drawing the inherent humour out of the horror icons.

Chick Young (Bud Abbott) and Wilbur Grey (Lou Costello) are a pair of Florida baggage clerks who accidentally damage a pair of crates en route to McDougal’s House Of Horrors. Despite the warnings of Larry Talbot (Lon Chaney Jr), the pair agree to deliver the packages themselves to make amends for their carelessness, but are unaware that they contain the undead corpses of Count Dracula (Bela Lugosi) and Frankenstein’s Monster (Glenn Strange).

Dracula is soon up and courting himself around society again under the guise of Dr Lahos, while working with Dr. Sandra Mornay (Lenore Aubert), who has been feigning a romantic interest in Wilbur as part of the vampire’s plan to use his more pliable brain as a replacement for the Monster’s.

Unfortunately the only person to believe Wilbur initially is Talbot, who has been tracking the monsters across Europe, but he is still bound by the Wolf Man’s curse and is every bit as dangerous under a full moon as Dracula and Frankenstein’s Monster.

In a lot of ways, this is a poor way to say goodbye to these wonderful creations, but it’s a ton of fun too.

Abbot and Costello are a solid, old-school double act and are a perfect foil for the straight up horror characters, with the latter’s non-verbal reactions to each new discovery never failing to raise a smile.

Seeing Lugosi in the cape once again is magnificent too. Sure he had a couple of great vampire parts (even if one wasn’t a real vampire) after setting the bar with Browning’s 1931 classic, but it’s a real tragedy we never got more of him in his signature role, as it’s a part that was made for him. He’s all eastern European charm, a nobleman who knows how to behave in public, but a black villain just under the surface and Lugosi is perfect for it, reminding you all the more his miscast John Carradine was in the last few films.

Poor Larry Talbot who was last seen cured of his lycanthropy at the end of House Of Dracula is now not only cured, but seems to have no recollection of ever being cured. It’s that kind of slackness and lazy approach to continuity we’ve got used to with these films, but it still rankles. Maybe he lost his cure when he shaved off that unflattering moustache, who knows? Worse, is how his lupine alter-ego is treated while trying to stalk Costello, tripping over branches and getting kicked up the arse by a comedy character. It’s a bit too far for my liking to be honest, but it works in the context of the film.

Similarly, Dracula’s shoving match with The Wolf Man using Wilbur strapped to a gurney is stupid and not in a good way, especially when the vampire who can turn into bat just turns and runs away after a prod too many. It’s these overt slapstick moments that work the least, especially when they’re making the joke at the expense of the horror icons we love so much.

Poor Glenn Strange gets the short straw yet again. Despite being an excellent choice to portray the Monster, apart from a very brief resuscitation scene early on, he’s given his usual five minutes at the end to wake up, stomp about the place and get set on fire. Makes a change from being blown up I suppose but he (and the character) really, really deserve better.

Dracula and The Wolf Man at least get a reasonably satisfying final battle, falling to their supposed deaths in each other’s arms, but it’s hardly the stuff of legend either. Oh and that ending with Vincent Price as the Invisible Man? It’s nonsense and makes zero sense, but I’m glad it (and Price himself) are in there…

Abbot and Costello Meet Frankenstein is a strong example of solid, 1940s slapstick humour and the Universal Monsters are used well in a good-looking, entertaining film. It’s just I can’t quite let go of the fact that this is how they went out. Not with a bang, but with a chortle.

There should have been another way.