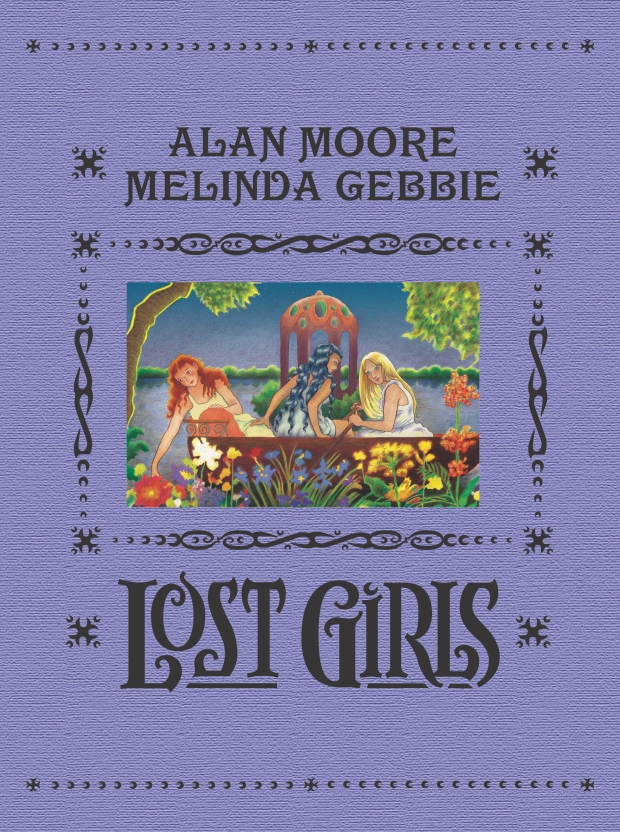 Lost Girls started its life back in 1991 as a serial in Steve Bissette’s TABOO magazine. We didn’t get a complete collected Graphic Novel however until 2006, and a UK release didn’t arrive until 2008 as a three volume set which was followed in 2009 by an HC Edition. This year, IDW are bringing us a new edition which boasts 32 pages of brand new artwork and commentary from Alan Moore and Melinda Gebbie themselves.

It has been 28 years since the first chapter of LOST GIRLS was published and 13 since it was first collected and it’s still one of the most controversial and divisive comics ever written. Moore and Gebbie freely admit that their work is pornography but there is so much more to Lost Girls than pornography, however well-crafted it may be.

This story, set in an Austrian Hotel at the start of the First World War, revolves around Alice, Wendy and Dorothy, but not the same girls you may recognise from the children’s stories. They are older women now, and they have a very different story to tell us about their adventures in Wonderland, Neverland and Oz. At its heart this is a book about sexual awakenings and how the mind reacts to, and defends itself from, the effects of abuse and grief and the worst excesses that others can inflict on the innocent. These are stories that are disturbing, heart-breaking and at times painful to read but which still manage to have a beauty inside them at the same time.

Dorothy’s tale starts with the infamous twister leading her to the discovery of her own sexuality and the subsequently self-destructive sexual excesses that come from her satiating her appetites with various farm hands that come to be represented by the Scarecrow, the Tin-man and the Cowardly Lion. Her seduction of her uncle leads him to become the Wizard, this final excess and betrayal creating the Wicked Witch from the broken remains of her aunt. 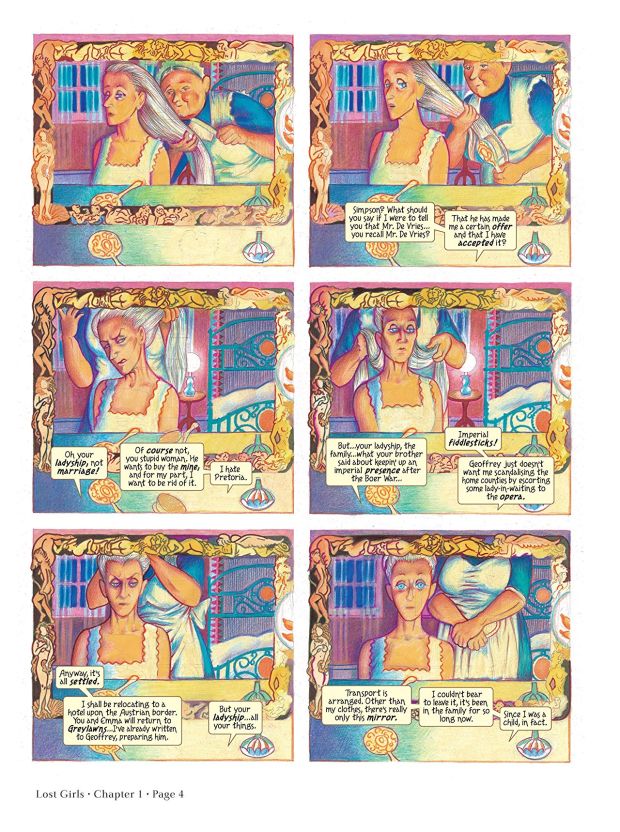 Alice’s tale is somewhat darker, being the story of a young girl systematically groomed and abused with the aid of alcohol and drugs to make her more compliant, first at the hands of her father’s best friend and then by one of the teachers at her boarding school. The various creatures and predators in her real life are transformed in the telling, as with Dorothy’s story, into the characters of Alice in Wonderland, and they become more vivid and surreal as Alice is used, abused, discarded and finally tumbles into her own mental breakdown and committal to a mental institution.

Wendy’s tale is, on the surface of it, a more innocent story, dealing with her sexual awakenings at the hands of an older boy. However there is a much, much darker undertone in this tale, as it deals not only with incest but also paedophilia. This is by far the most difficult of the three stories to read, especially given the graphic depictions in the artwork. Wendy’s fantasy recreates the boy she discovers “playing” with his friends in the park as the puckish Peter Pan, the various other children she encounters becoming the lost boys and the shadowy ugly man with the twisted hand that watches them from the bushes becomes Hook.

The telling of these three biographies is punctuated by a series of diversions as our heroines live their lives in the hotel, first becoming lovers and then becoming friends. There are also other stories intertwined which show a glimpse of the other guests and staff and their own awakenings and darker selves. Even Wendy’s husband is not exempt as he is finally led to accept and embrace the truth of his own sexuality. 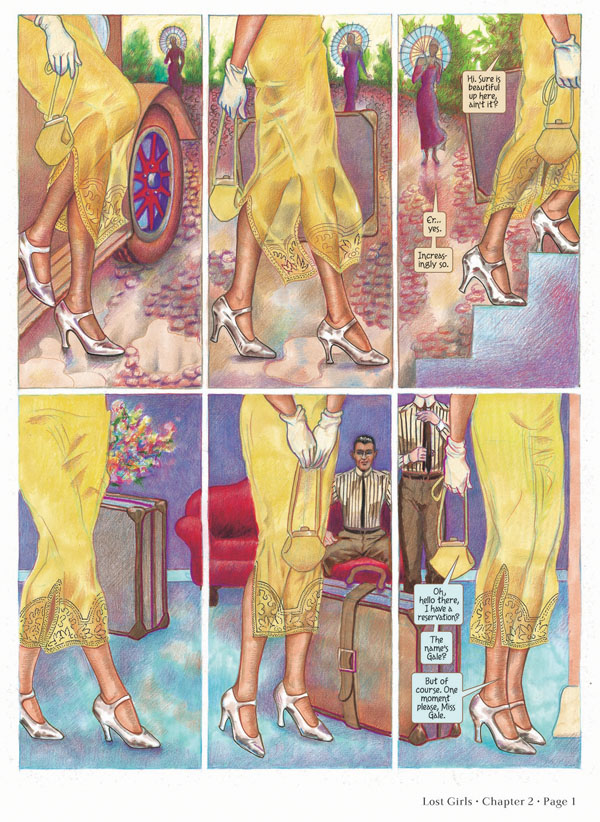 Alan Moore is renowned for the sexually explicit, often morally corrupt content of his works and I have seen an enormous amount of negativity towards him as a result of this. The point that is often missed by those making the negative comments is that there is always a purpose behind it, it’s never there purely for shock factor or the titillation of the average middle-aged comic book reader. I personally have found, in conversation with such people, that they have completely missed the point and have only understood the very surface of the story as a whole. That said, Lost Girls is a slightly different kettle of fish.

Where most of Moore’s work tends to have such high shock factor sexual depravity in short explosive sections of his stories, this book is intended to be pornography from the outset and it’s meant to shock and titillate; there is a whole world and stories of simple, and dare I say, more savoury pornography, outside the biographies, which makes the realisation of where each of the three main characters’ stories are going that much more horrifying. I’m pretty hardened to the worst excesses of Alan Moore but I still get the urge to take a shower and scrub myself after reading sections of this book. Alan Moore, to me, is the greatest comic book writer of all time, and I’m therefore biased towards his work. This isn’t his greatest work of all time but it is one that has been crafted over an incredible amount of time and with a passion borne from the relationship that developed between him and Gebbie during the process and it shows so much in the finished product.

What can I say about Melinda Gebbie’s artwork that hasn’t been said before? If I’m honest, probably nothing, as I’m just not that eloquent. This book is a beautifully crafted work of art from start to finish and it’s clear to see that whilst Moore is an incredibly talented writer, his story has been led by the imagination of Gebbie. Ignoring the subject matter for a moment, the art itself is gorgeous; bold and startling at times, ephemeral and fantastical at others. Dorothy’s biography, Alice’s, Wendy’s all have their own individual styles making them very distinct when we slip from one world to the next in the narrative. There are even differing styles/ themes for the world outside these memories and the people within. This is a work of art 16 years in the making and it shows in the passion that has been poured into each panel and each page. 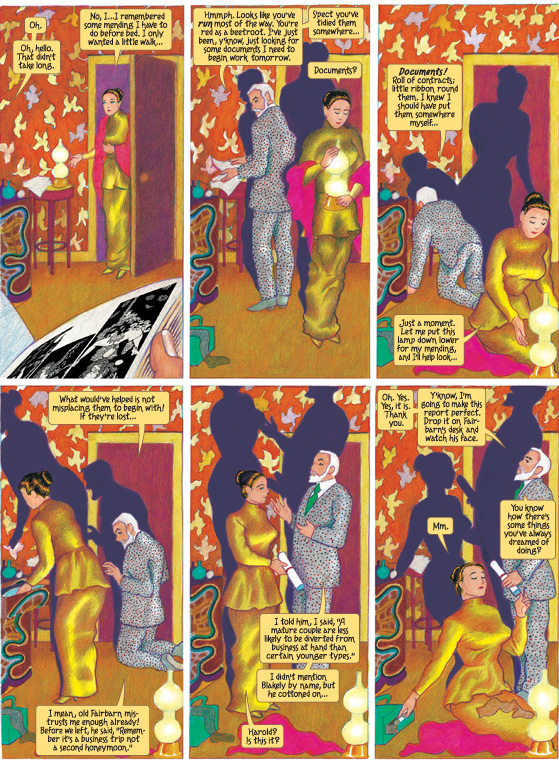 This is not a book you leave out if your relatives, boss, colleagues, friends, are coming round. If I’m honest, I’m not comfortable having my elderly Chihuahua giving me disapproving looks from his cushion whilst I read it. If you’re looking for a cheap thrill this book is not for you. Yes it’s pornography but it’s also a story that covers some extremely difficult and disturbing themes that a lot of people will find very uncomfortable to sit through. If however, you are open-minded and willing to actually think about the stories that are being told, this is a book that has a lot to offer. There are a multitude of layers of emotions within these stories, from the deepest depths of despair to the airy heights of love in its purest form, if you’re willing to look beneath the surface.