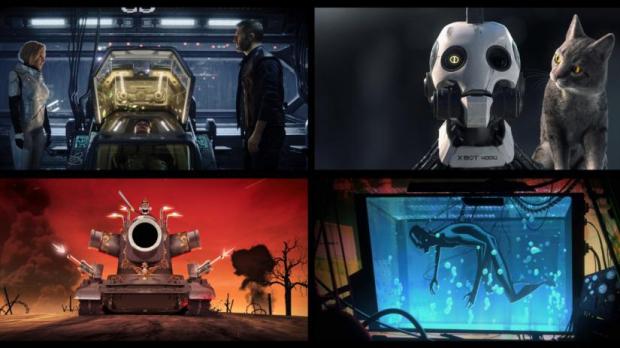 It’s certainly strange when something comes along like Love, Death and Robots. Something which is so amazingly unexpected that you’d think it was the result of a party of geeks drinking beers and inventing wondrous “what if’s” that will never get made.

Like, wouldn’t it be great if David Fincher, the director of Fight Club, Se7en and Zodiac teamed up with Tim Miller to gather a list of creative geniuses and bring you cyberpunk and magical tales of alternative history and apocalyptic visions? That would be great wouldn’t it? But it’ll never happen… right?

Well thanks to Netflix the dream has become a reality. Which makes sense, because honestly, Netflix have been absolutely smashing it out of the park lately with their unique and creative projects, with hits like Umbrella Academy, Russian Doll and Life After Death already being released in the first few months of 2019.

When the trailer for Love, Death and Robots dropped out of nowhere I was beyond hyped, and after bingeing the entire series in one day, I can tell you it definitely doesn’t disappoint. Each episode is its own shining star, with a different creative team presenting their own new world and their own unique vision of the past or future, all condensed into no more than 18-minute chunks.

While all the episodes are different there are a few overlapping themes along the way. Most are animated in some way, all deal with the titular themes of love death or robots, but to be honest, that theme at time is very creatively stretched. The stories are expertly cut, not feeling like shorts at all but individual films in their own right, filled with feisty females and dark characters that will haunt you long after viewing. Oh and cats, lots of cats.

To not mention any of the episodes would be a disservice to their individual beauty, so here’s a quick spoiler-free rundown of each episode:

Sonnie’s Edge: Hell hath no fury like a woman scorned. Especially one psychically linked to a ferocious reptilian killer in this cyberpunk underground fight arena tale of revenge. Sleek, sexy and gory!

Three Robots: In a world long empty of humanity, three robots go on a tour of an abandoned city, musing over just how idiotic the human race was. It manages to be genuinely funny while making you think just how weird and stupid us humans can be with its great observational comedy.

The Witness: A futuristic mystery, reminiscent of Angel Heart if it was directed by Ridley Scott or Mamoru Oshii. The neon flashing streets and shine of leather will have you tumbling down a dream that quickly turns into a nightmare. One of my favourites of the entire series.

Suits: Bad-ass farmers defending their homeland from alien invaders. If you’re in your mid-twenties and remember Megas XLR and Starship Troopers growing up then consider this your childhood joyfully distilled into a short, kick-ass film.

Sucker of Cats: Don’t be fooled by the cartoony appearance. This anime is a mix of demons, archaeology, mercenaries and of course pussy! Damn funny, and a wild ride.

When The Yogurt Took Over: The comical graphics match the tone perfectly in this parody of popular culture and genetic meddling. The ‘50s boom of sci-fi films warned us about aliens, Terminator warned us about the machines, but no one warned us of a yogurt gaining sentience and coercing its way into ownership of mankind.

Beyond the Aquila Rift: Conjuring up instant nostalgia for the Alien franchise, a ship on its way home from a mission find itself drastically off course. Thankfully the captain awakes to a familiar face, but not is all as it seems. A dirty, gritty view of space travel with a touch of horror.

Good Hunting: A Steampunk anime tale of love, revenge, childhood and finding your way in an ever-changing world. Absolutely wonderful!

The Dump: If dog is a man’s best friend then this horror story will show you what the best friend of an old hobo living on a dump site is. Heart-pumping action, gore and good humour.

Shape Shifters: Set in an alternative timeline where werewolves are not only a reality but, somewhat inevitably, the military use them in active service. I would give an arm and a leg to see this as a full-length feature but this snapshot still contains action to fill two hours.

Helping Hand: Space is a terrifying, isolating and dangerous place. Even a small bolt out of place can make you go full James Franco. This nerve-racking short is tense as hell.

Fish Night: A visual masterpiece. Two salesmen break down while driving across the desert. While they wait for the heat to die down, the old man muses over the history of the place, and it’s not long until that history takes them on a journey they’ll never forget. 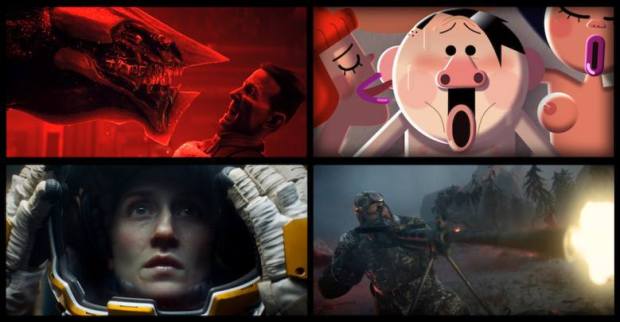 Lucky 13: An AI love story through the medium of battle. Pilots always grow attached to their ships but adding AI to this well-known tale really brings a new dynamic to the heat of battle. Surprisingly heart-warming through the explosions.

Zinia Blue: We all search for the meaning of life, and some of us venture into art for that meaning. This fascinating tale asks not only what makes someone human, but also how far they will go in search of that meaning.

Ice Age: The only live-action film with a star studded cast. A couple find a civilisation in their antique fridge. This manages to cast a light on human nature while still being funny and insightful.

Alternate Histories: Inglorious Basterds showed us just how satisfying watching Hitler die can be, and this film continues the trend in a series of gloriously laugh-out-loud moments.

The Secret War: To end the series, we have a film that is aching to be made into a video game or Hellboy storyline. A group of Russian WW2 soldiers hunt a demonic horde in a tale which pushes the limits of computer animation both in terms of storytelling and scale.

At the end of the day this is pretty much unmissable television, delivering a fantastic anthology of blood, guts, love, death, philosophy, sex and cool science fiction.