Ahead of the series launch at the end of next month, Warner Bros have finally given us a live action look at the title character from DC Universe’s upcoming Swamp Thing series.

The show will star Andy Bean as Alec Holland, Crystal Reed as Abby Arcane, Jeryl Prescott as Madame Xanadu, Kevin Durand as Jason Woodtrue/Floronic Man and Derek Mears as the monster himself.

The series was also recently the subject of some worrying speculation when reports started circulated that production had shut down early, with hasty rewrites underway while Warner Bros evaluates the future of its steaming service.

Definitely a situation to keep an eye on, but for the time being Swamp Thing is still set to launch on DC Universe on the 31st of May.

EDIT: The DC Universe community manager has confirmed the series is still going ahead as planned, but the first season will run for 10 episodes rather than the originally announced 13 (see below). 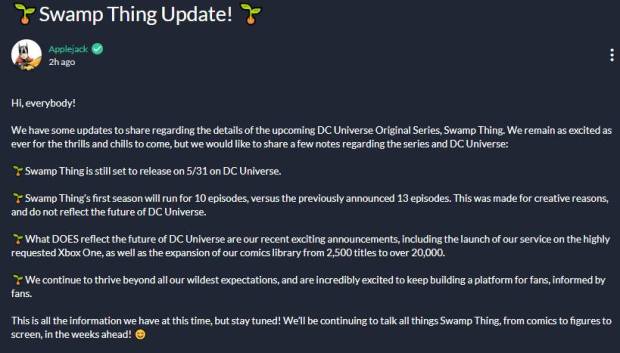