People have been going missing from Tatoskok Falls, New Hampshire for decades. When those same people are found dead in some old ruins deep in the woods, the question of where they are has been answered. However, the mystery of just how they got there and what the ritualistic nature of their deaths means is up to Hellboy and the B.P.R.D. to solve.

Set in the mid-1970s, Mike Mignola and Scott Allie are bringing us a thriller with a real X-Files-meets-Supernatural feel to it. There’s a lot going on in this issue, and a lot of people are introduced, all of whom seem wonderfully wholesome and above suspicion. There are theories galore, from witches to vampires, to demons and everything in between. Hellboy and Agent Kinsley take something of a back seat in this issue, letting local law enforcement offer most of the theories and details of the mystery. Where Hellboy and Kinsley are mostly involved is to provide a foil for the cops, providing little nudges and snippets of information but mostly sitting on the sidelines.

What I like about this issue is that it provides a real change of pace from a lot of recent Hellboy/B.P.R.D. stories. There’s no Nazis and we’re not facing the imminent destruction of the universe by eons-old space dragons! It’s nice to see a Hellboy story that spends some time focusing on folklore and mythology again, looking at the supernatural on a more local and intimate scale.

There is a side story running through this issue for Liz, but it seemed a little out of place and I’m not sure how it meshes with what’s going to be a three issue story. On the whole though, it’s still a good entry into the Hellboy archives and after the conclusion of The Devil You Know, it’s reassuring to see that there are always more stories to be told and Mike Mignola and the team aren’t losing their edge in keeping Hellboy’s world spinning.

Whilst typically I quite enjoy Christopher Mitten’s artwork, it misses the mark a few too many times for me in this issue. It’s a bit too cartoony in places, which took me out of the story more than a few times. This is an uncharacteristic lapse and I’m possibly being hypercritical at this point because this is a world I’ve invested in since day one. It’s by no means the worst artwork to ever grace the pages of the Mignolaverse, and by and large Mitten does sterling work. I guess I’m just slipping into that dangerous, proprietary mentality that fans are guilty of when they’ve invested over 25 years in a franchise. You expect nothing short of perfection every issue and the slightest wrinkle can be jarring.

That said, and on the whole, Saturn Returns features a pleasing step back into the more local and less dramatic or cataclysmic stories of Hellboy’s world, and does without the baggage of a sprawling saga to slow down the narrative. This is a story that is building pace and tension slowly and deliberately, without an apparent need to rush to a trademark quip and beat down with the right hand of Doom. It’s also a story that I think I’m going to really enjoy! 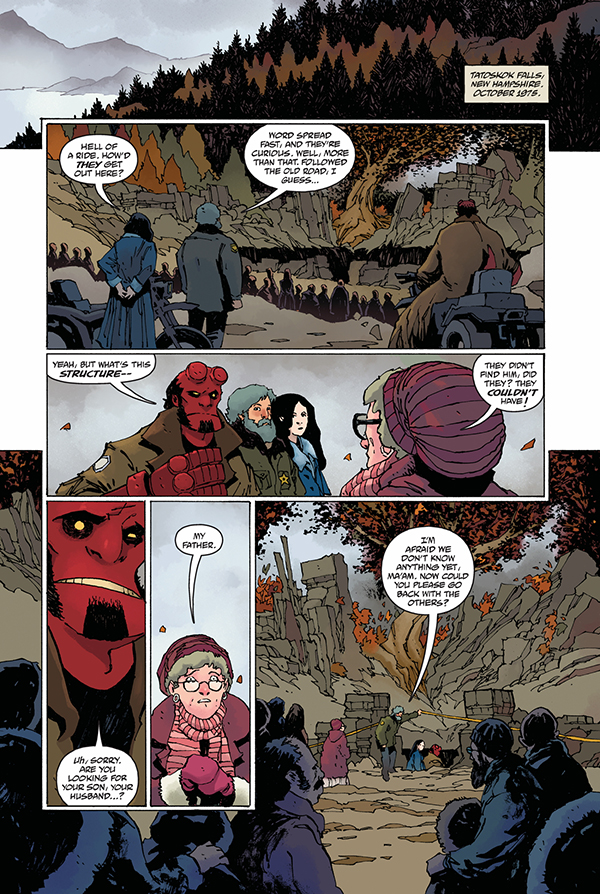 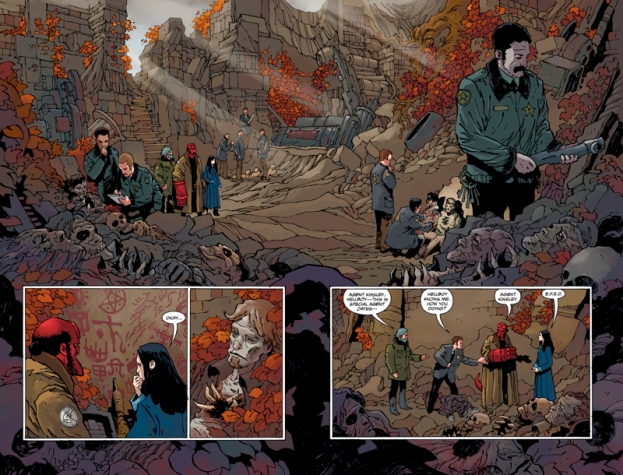