In the town of Shudder-To-Think (PA), things are not normal. The coal mines below the town have been on fire for years and the woods are full of rabbits with human eyes, skinless men and a Deer Woman that hunts hungry girls. When two young women, El and Octavia, wake up in the local fleapit cinema with a vague sense that something unsavoury has happened to them while they were asleep, they set out to find out what is really going on in Shudder.

Issue two delves more into the history of both the town and our protagonists, shedding more light on what has happened but doing so teasingly. El is desperate for answers to what happened to them but Octavia wants to forget it happened. When she starts to display some of the strange black marks described by the old women in the town, could they be connected to her growing indifference and hostility towards El?

We’re two issues into this series and I honestly have no idea what is going on! For a change, and for the most part, this is actually a good thing. There’s a real Twin Peaks meets Silent Hill vibe going on, and Machado’s narrative is disturbing and chilling, leaving you wanting more even though there are still a hundred unanswered questions.

The way the narrative is delivered, predominantly as excerpts from El and Octavia’s diaries, is really well done. There’s a very matter-of-fact “shit happens” approach, almost like the horrors unfolding in their town are perfectly normal. The descriptions of the illnesses affecting the townsfolk, the unexplained deaths, the malaise that affects only the women, the unexplained cause of the fires, the empty graves, and the horrifying creatures stalking the woods are all delivered in a satisfyingly unsettling manner.

However, none of these things are the most disturbing thing that El and Octavia must face. The townsfolk that they encounter have a sinister purpose that the girls will have to uncover before it’s too late and they become just another one of the town’s unexplained and unresolved statistics.

While the artwork in this series might not be to everyone’s taste, and certainly isn’t what I would typically enjoy, I do quite like what Dani does here. There’s an almost sketchbook feel to the art that really accentuates the darkness and unreality surrounding our protagonists.

The artwork also helps to make the story feel more personal. With it being delivered predominantly through diary entries, the art style, lettering, and colouring focuses everything in on El and Octavia, with everything else happening around them seeming almost incidental. As I said, not to everyone’s taste – it’s rough and lacks a lot of detail and I’m not certain that without the strength of writing behind it that it would work elsewhere, but here it’s just fine.

Now while I am enjoying this series, I do have some reservations. Hill House Comics have produced some incredible stuff in the last few months and this one just doesn’t quite hit home as well as some of the others have for me. That isn’t to say that this isn’t a good title, it is, I’m just not sure what it wants to be. This is a horror series with a lot of positives, but there are a lot of themes going on that don’t really connect. We have multiple subgenres of horror walking alongside each other in the narrative, but they never really meet up.

Now a big chunk of this may be because the heart of the story centres around El and Octavia’s relationship, with the town’s oddities playing second fiddle, and there’s the possibility that all these themes may connect further down the line, but it’s just taking me too far out of the story for me to completely enjoy it at this stage. I think that this may well be a series where I wait for the trades to arrive. 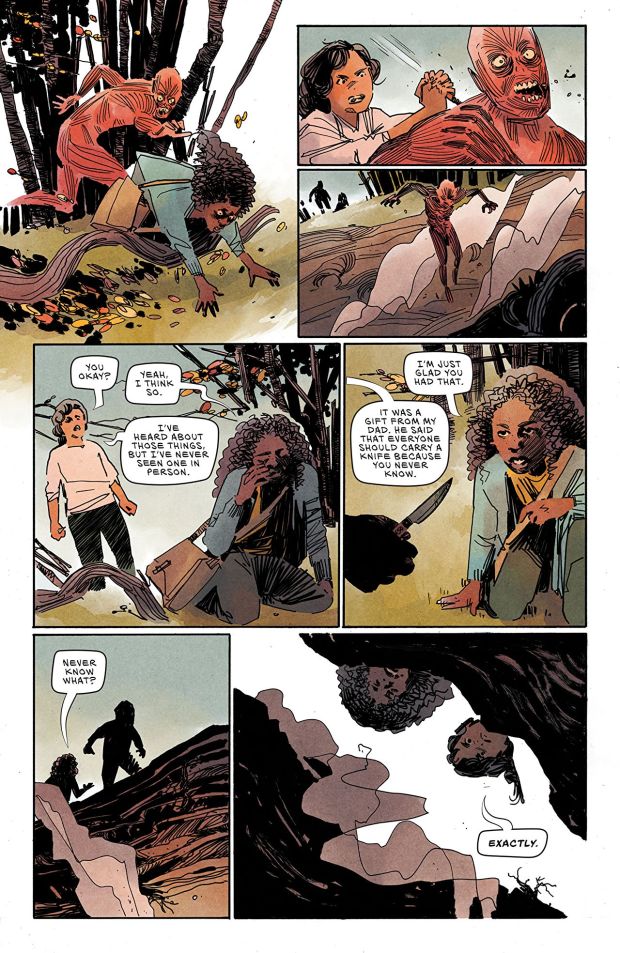