Waking up confused in a ditch isn’t a particularly new experience for Denis, a young man who continually leaves a trail of bad decisions in his wake.  But when he discovers that a passing car is seemingly being driven by a deer/man hybrid, he naturally surmises that the “poison in his brain” is subjecting him to yet another wild dream.  His reaction to what he assumes to be a trip into his lucid subconscious is pretty much to be expected; he heads to the nearest bar and starts drinking. Sure, the patrons are a little on the weird side, but the beer is cold and it’s surely only a matter of time until he wakes up, right?  Right??

Series writer W. Maxwell Prince ensures that Denis is an interesting protagonist in that slightly familiar ‘flawed everyman’ mould.  His inner monologue propels the book forwards, and there’s something inherently relatable about the way he reacts to the shocking events and situations being inflicted upon him.  Sure, he obviously has some issues, with substance abuse being hinted at throughout the issue, but he also proves his character by doing the right thing in potentially dangerous circumstances (even if he does initially believe that he’s dreaming at the time).

Tyler Jenkins artwork does an absolutely stellar job of nailing the hazy, dreamlike quality of the town of Nowhere throughout the course of this issue. It’s not secret that I’ve been a massive fan of the Canadian artist since I first stumbled upon his work on Snowblind with Ollie Masters back in 2015, and for my money, this is absolutely career-best work from Jenkins.  Striking character designs and creative layouts abound, and while the narrative is still playing its cards fairly close to its chest for the time being, Jenkins’ artwork – coloured to scintillating effect by his talented wife Hilary – easily pushes this book to the next level.

The supporting cast of characters, from the aforementioned animal hybrids to facially-challenged bartenders, help to underscore the trippy quality of the world Denis is inhabiting, but Prince saves the best for last by introducing a rather menacing antagonist to the proceedings during the chilling final few pages.  Again, I have absolutely no clue what’s actually happening, but the execution is nothing short of gripping, and both Prince and Jenkins have done more than enough to ensure that I’ll be hungrily devouring issue two as soon as it goes on sale next month.

A captivating start then, with an intriguing protagonist being thrust into a bewildering situation, and some of the best artwork you’re likely to see on a monthly comic book.  There are certainly far more questions than answers at the moment, but isn’t that how all good mysteries begin anyway?  Highly, highly recommended. 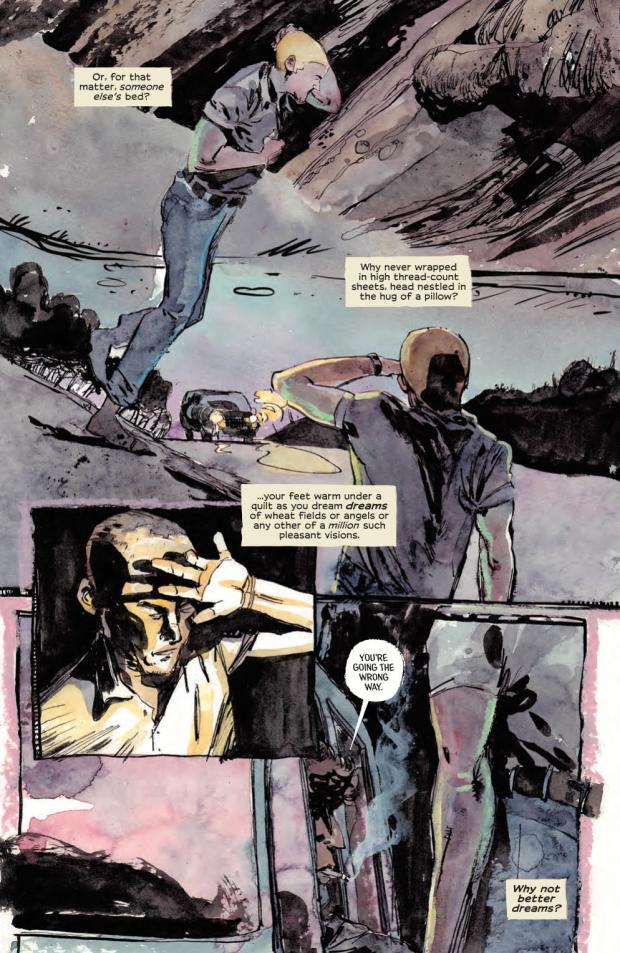