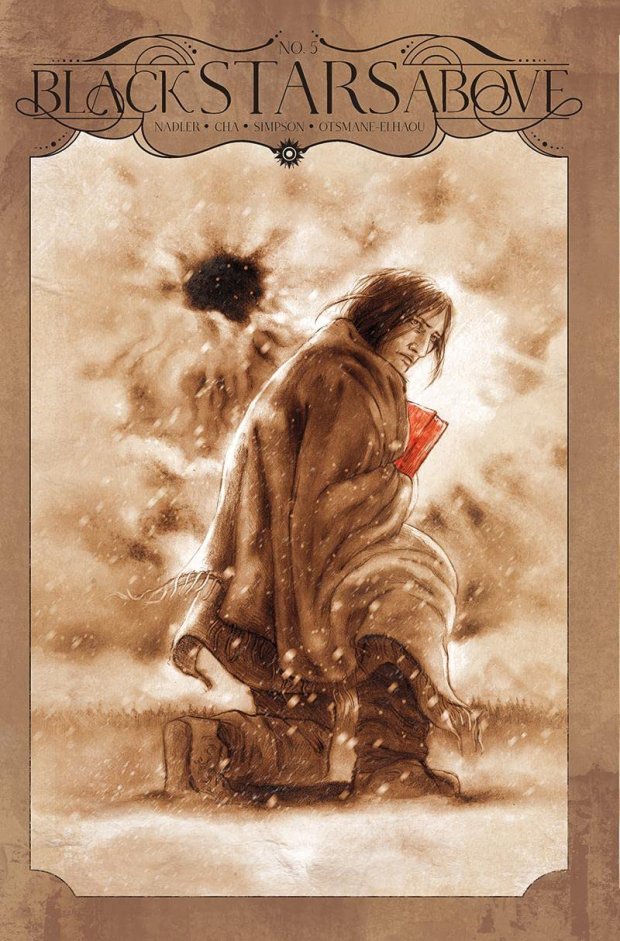 Eulalie has reached her destination and the townsfolk of The Town North of The Woods have welcomed her with open arms, but what do they want from her and what have they done with the Alien Infant? The influence of the Black Stars seems to permeates everything in the town, and Eulalie must decide whether to submit to their cosmic inevitability or fight to free herself and her charge from its sinister and deranged inhabitants.

I have been dreading this issue as it marks the end of what has been a genuine highlight in my pull list, as well as being a truly remarkable tale of cosmic horror. I have eulogised at length about both the writing, artwork and lettering in this series and I’m delighted to say that this final issue does not disappoint.

Throughout the series, there has been an escalating series of horrors to assail Eulalie. However, our protagonist has always been more than equal to those horrors and, if you could ascribe such emotion to the influences leading her onwards, has frustrated them at every turn. Having reached her destination and delivered her charge safely, this should be a period of respite for Eulalie, but in the best traditions of Lovecraft, Machen and Blackwood, we know that nothing will be that simple.

The townsfolk are truly abhorrent. There is something immediately distasteful and disturbing about them, even their appearance is diseased and fungoid, perhaps emulating the otherworldly Lovecraftian creatures from the distant Yuggoth and beyond. The black ichor that flows in the veins of the townsfolk and the forest creatures Eulalie has encountered on her journey serves as an insidious, invasive, consuming *gift* from the Black Stars, leeching their corporeal material into our dimension that they can mould and transform us to suit their unknowable purposes. It’s a truly hideous transformation that the townsfolk clearly intend to be Eulalie’s fate if she cannot find the strength to break free of their influence.

I love Jenna Cha’s depiction of the town and its inhabitants. It immediately set my teeth on edge in the way that the final scenes of the 1973 film The Wickerman did. You can see the terrifying, inevitable end that is coming for Edward Woodward and you cling on to the hope that he will be saved, even when the fire creeps closer and the credits start to roll, you still hope… This is same building dread I’ve had for our protagonist throughout this series, and with her now seemingly in an inescapable trap, the final denouement is something of a gear change from what you would normally expect and, for me, provides an extremely satisfying end to the story.

In my reviews I would normally write a paragraph about author, artists and letterer separately, but I think that really, Lonnie Nadler, Jenna Cha, Brad Simpson and Hassan Otsmane-Elhaou have done such a masterful job between them that singling anyone out would do an injustice to the others. The plot, narrative, artwork, lettering and design are all superb, and changing any one of them would be to remove something of the soul of this story.

It really is a testament to the skills of the creative team involved in this story that they’ve kept me on the edge of my seat from the first page of this series to the last. Those of you who regularly read my reviews (and thank you if you are a regular) will know that I’m all about horror, and the more Lovecraftian the better, so this series was always going to tick boxes for me, but by the same token was going to have to be something pretty damned special to grab my attention and keep hold of it. Black Stars Above has been one of the best Lovecraftian horror series I’ve read, and I would go as far as saying it belongs up there with some of Alan Moore’s creations.

A fantastic, chilling and satisfying conclusion to a story that I’m reluctant to let go of this soon.

If you have missed grabbing the single issues of this run then fret not, as the collected edition of Black Stars Above will be released on 27th May 2020 and is available for pre-order now.