With Sally Pride putting Hob firmly in his place at the end of the previous issue, the opening of this latest chapter of Sophie Campbell’s TMNT run feels very much like a change in direction and tone.  Yes, things are still incredibly unpleasant for the inhabitants of Mutant Town, but there’s an uptick in positivity here, from the befriending of the rather cute would-be ‘child soldiers’ to the touching exchange between Raph and Alopex you can see in the preview below.  However, in this instance, these moments are merely the tip of the emotional iceberg.

I’m not going to delve too deeply into the specifics of the issue, but suffice to say that it focuses almost exclusively on our four brothers and Jennika, and features the emotional closure that a lot of readers – myself included – have been desperately waiting for. Seriously, there are some beautifully delivered beats along the way here, with Campbell marrying her writing and artwork perfectly to ensure that these moments resonate as loudly as possible with the reader.

More than just providing emotive writing, Campbell keeps things visually striking throughout, with her expressive character work and distinctive ‘horizontal bar’ panels punctuating the issue.  Ronda Pattison and Shawn Lee bring some much-needed familiarity to the visual package with their colours and letters respectively, and for an issue utterly devoid of action, violence or conflict, this is an absolute visual treat.

Campbell lays a confident groundwork for the next stage in the TMNT saga here, with an exciting new dynamic for the inhabitants of Mutant Town and our titular teenagers.  There are still plenty of threats out there, from Hob to the EPF to Baxter Stockman (and wait, wasn’t there a twisted parasitic Utrom version of Leatherhead still out there somewhere too?) waiting to strike, but it’s always nice to take a moment to focus on character rather than plot, something Campbell clearly excels at.

A beautiful issue in every possible way, packed with big character beats and moments that will genuinely leave you with a lump in your throat.  One of the best issues of IDW’s ongoing TMNT series that I’ve read in a long time, and in a world of uncertainty and anxiety, this is exactly the comic book that a lot of people need right now.  Fantastic stuff. 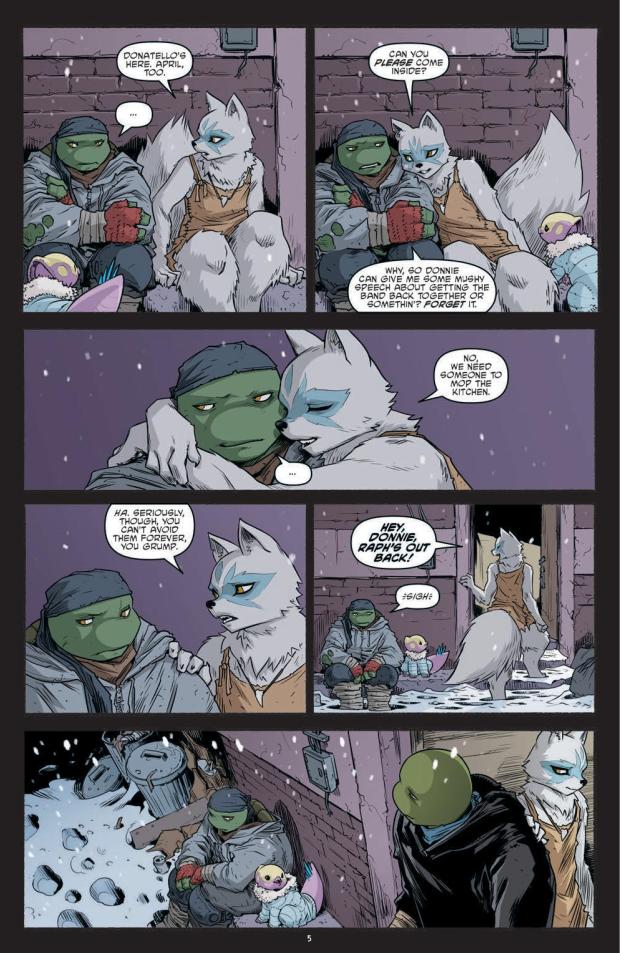