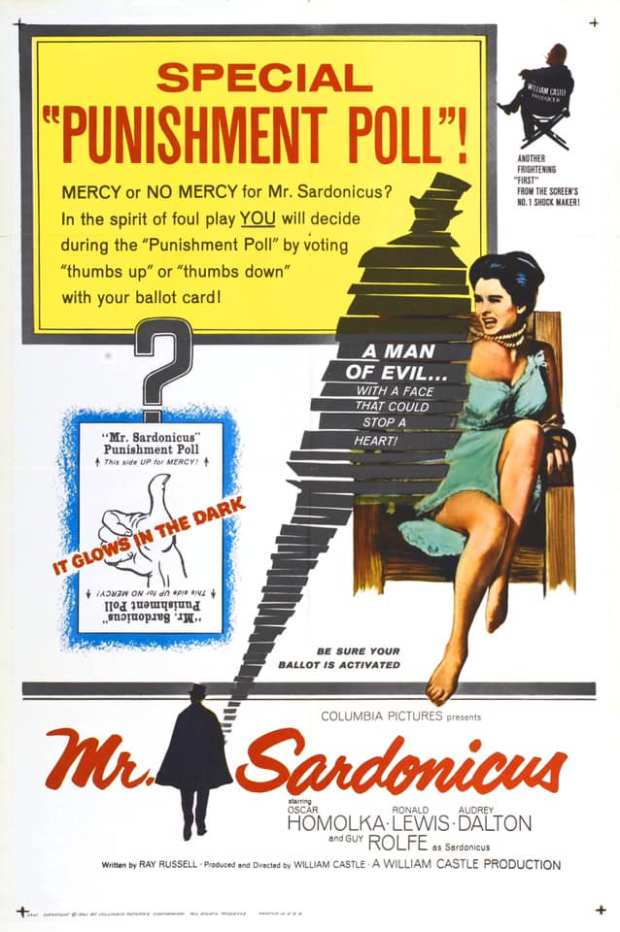 William Castle had been cranking out his gimmick-led brand of horror at a frantic rate by late 1961, but had never tried his hand at the period-set gothics that had came back into vogue since Hammer changed the game a few years before.

That all changed with Dr Sardonicus, an atmospheric vintage chiller that sadly promised more than it ever delivered.

Naturally, Castle had to crowbar in one of those trademark gimmicks, so this time around saw the debut of the “Punishment Poll”. As the film drew to its conclusion, audiences would be encouraged to vote on its outcome by holding up a cardboard glow-in-the-dark hand with its thumb out. Given the options of whether Sardonicus would live (thumbs up) or die (thumbs down), the outcome reputedly only ever ended one way, to the extent that the other ending was so unnecessary, it was never even shot.

Castle might not have been the greatest filmmaker in the world, but he knew his audiences. Mercy was in short supply.

It is 1880. London physician Sir Robert Cargrave (Lewis) receives a letter from his former love Maude (Dalton) asking for his professional assistance on behalf of her husband, the Baron Sardonicus (Rolfe).

After having to dig up his father’s rotting corpse to retrieve a lottery ticket, the nobleman’s face has been frozen in a hideous, rictus grin.

Cargrave travels to their home in Gorslava and finds Maude living in fear of the man she has married, as well as his brutish manservant Krul (Homolka) who he finds torturing a maid with leeches.

Sardonicus demands Cargrave uses his skill with treating paralysis to cure him of his affliction, but just in case he won’t co-operate, Krul has been instructed to take a scalpel to Maude’s face and make her match her husband…

To say there’s a lot to enjoy in Mr Sardonicus would probably be a bit of an exaggeration, but it’s entertaining enough, even though there is plenty of room for improvement.

The big issue is it never really lives up to what Castle promises right at the start during his opening monologue. Emerging out of the fog in 1880 London, he sets up a story of “graciousness, gallantry…and ghouls”, which he goes on to define as “an evil being who robs graves and feeds on corpses”. Which would be great if any of that made it onto the screen, but the closest we get is the younger Sardonicus (a normal and non-evil young farmer going by his original name of Marek Toleslawski) having to reclaim the lottery ticket from the pocket of father’s recently buried body. That’s it.

There’s no corpse-eating and it’s barely even a grave robbery, more a son retrieving something and being mentally and physically scarred in the process.

As disappointing as Castle’s unfulfilled promises are, there is at least some horror in show at the castle of Mr Sardonicus.

Since his lottery win and hideous deformity, Toleslawski has changed more than just his status and appearance. He’s become cruel and malicious, so desperate to find a cure that he has been paying local women for their services as guinea pigs. The scene where he picks his companion for the night from a line-up is utterly chilling, purely due to her reaction. She’s visibly upset, suggesting she’s been her before and knows what she’s in for. We don’t get to see it, but we see enough.

There’s another subtle hint to his behaviour when he appears at Maude’s door the next day (they sleep separately, thankfully), assuring her safety as he is “not a man who is affectionate in the morning hours”. She’s completely on edge anyway, leaving you to wonder just when exactly he has been “affectionate” and what that involved. Brrrr.

Guy Rolfe exudes icy malice as the Baron, despite most of his role being behind a mask and the rest from under the rigid grin of his “real” face. It’s a vocal and physical performance and Rolfe does a superb job with it. 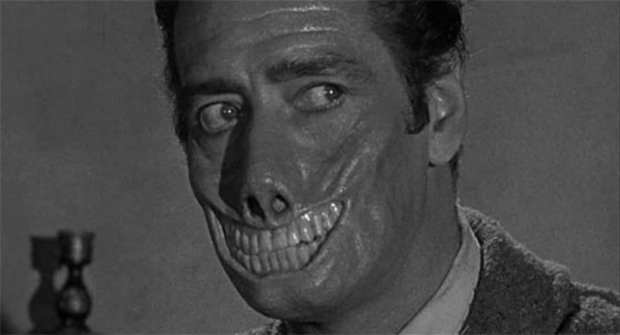 Much more overt is Oskar Homolka as the manservant Krul. He’s a hideous character, brutally violent, sadistic and full of animalistic cunning. He doesn’t need much encouragement from his master to get his leeches or knives out to menace young women, but as we see later, he has no master but himself.

There’s no shortage of atmosphere either, from the fog-drenched graveyard that wouldn’t have looked out of place in a classic Universal film to the sumptuous but creepy sets of the Castle Sardonicus. It’s a film that certainly ticks a lot of the boxes for a good horror film.

Sadly, there’s just not enough horror to go round and it hobbles things badly. Ray Russell’s script (takes from his own short story) is far too concerned with people talking and romantic melodrama than he is about delivering scares. Some horrors can get away with this, but if you are going to attempt it, you need a Tourneur and not a Castle running the show.

Mr Sardonicus isn’t a bad film as such, but more than anything shows William Castle’s limitations as a filmmaker. He’s massively enjoyable when he sticks to carnival-style shocks and frights, but just doesn’t cut it without them. 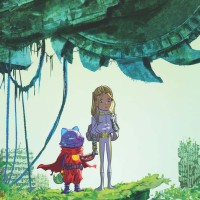