In the history of cinema, there’s been few filmmakers thriftier than Roger Corman. A master of coming in under-budget and ahead of time, he was also always ready to take advantage of any opportunity while giving a break to young, up and coming directors.

In 1963 when he found himself with $22,000 left over from filming The Young Racers in Ireland, Corman saw a chance to crank out another feature using much of the same cast and crew before they went their separate ways. After helming a couple of forgettable sexploitation cheapies, sound engineer Francis Coppola was given his chance in the director’s chair and told to knock out something on the Psycho vein, with horrific murders but with a gothic atmosphere thrown in for good measure.

Coppola would deliver a script within days and get to work on what would become the sensationally (if nonsensically) titled Dementia 13.

The film would show flashes of what the future Francis Ford Coppola was capable of, with some remarkable scenes and set-pieces, especially for the constraints he was working under and his relative inexperience. His tendency to go over-budget and over-time would be given a first outing too though, while his finished film wasn’t up to the levels of schlock originally requested by Corman, who would insist on future exploitation legend Jack Hill coming in to shoot what would become one of the most memorable scenes in the whole film.

While out boating with her husband John, Louise Halloran (Anders) is incensed that in the event of his death, his share of the family fortune will he left to a charity in his dead sister Kathleen’s name, leaving her with nothing. The stress of the argument triggers a fatal heart attack in John and seeing an opportunity, Louise dumps his body over the side of the boat.

Lying to his family in Ireland that he has had to go away on business, she travels to their palatial country home to win over his mother Lady Halloran and ingratiate herself into both the family and their substantial will.

She discovers that Kathleen drowned as a child and her mother still hasn’t got over it, holding a ceremony every year for her in which she always passes out with the emotional pain it causes her. Not only that, she is deeply superstitious about the whole thing, giving Louise an idea on how to find favour with her.

She begins to suggest that Kathleen is trying to communicate with her from beyond the grave, but while she puts her scheme into action, there is much more horror lurking in the shadows than she could ever expect…

As a horror fan, there’s something amusingly satisfying that the director of some of the greatest movies ever committed to celluloid made his start with a piece of cheap genre trash like Dementia 13.

You can tell it’s a rush job, it doesn’t hang together all that well and feels like a few different films crudely nailed together, but none of these things really matter, as what it is for the most part is a lot of fun.

There’s flashes of Coppola’s innate talent even at this early stage, which hoists the whole production up a few notches, such as the beautifully eerie sequence when the still-playing radio sinks to the bottom of the lake after Louise throws it in after her husband’s corpse, or the doll-strewn bedroom of poor dead Kathleen, still undisturbed after all these years. They’re only dolls, but Coppola engenders a feeling of unease about the room that calls to mind how Tobe Hooper introduced us to a certain house down in Texas a few years later. We don’t belong here and should leave immediately is the message here. Naturally, it’s one that is ignored.

Most striking of all is the other underwater scene, where Louise strips off and swims up the bottom of the Halloran family lake to tie some dolls to the bottom of it, only to find what appears to be Kathleen’s body already there. It’s beautifully shot, with its otherworldly feel brilliantly contrasting the sleaze and horror that accompanies it.

Then of course there’s what happens when she makes her panicked escape to the surface. Up until now, it’s been a femme fatale story, one of duplicity and scheming, which has only recently taken a turn for the possibly supernatural. While we’re still reeling from that twist, Coppola delivers the Psycho “inspiration” he was hired to do, but it’s no less shocking for its derivation.

For one thing it’s absolutely brutal, with Anders being relentlessly bludgeoned before being dragged away lifeless, near-naked and covered in blood. It would have been shocking at any point, but it really does come out of nowhere and just as her plan is starting to take shape.

It’s a credit to Luana Anders how hard her character’s death hits too, as she’s not exactly the most appealing of people, but she feels real, flaws and all, thanks to what is a much stronger performance than you normally get in this level of film. She’s the best thing about the whole thing to be honest, which is a big loss going forward, but it’s a loss worth taking for what we gain in sheer horror.

From then on in, it’s a different movie entirely. The main character is gone and with it her storyline, leaving us with no idea where it’s all going. The supernatural element takes a backseat to the random axe murder mystery, though Kathleen’s body popping up here and there keeps you guessing on that front, as clumsily as it’s handled.

There’s some more well-realised creepy set-pieces, with Lady Halloran finding a shrine to her dead daughter only to be chased away by the mad axeman and that body turning up yet again, unseen in the abandoned workshop of the long-dead Lord Halloran.

Perhaps the most unsettling of all is Patrick Magee’s turn as Dr Caleb, the family physician, a man so naturally creepy he needs to complain about people accusing him of just that at social gatherings.

“My lip twists, that doesn’t mean that every word I say is sinister!” No, it actually does, Dr Caleb. He’s actually terrifying. Even when he finds Louise’s shredded corpse hung up alongside a dead pig, he’s still the most disturbing thing in the room.

He’s possibly even more frightening than Dementia 13’s most infamous scene, the one Coppola didn’t shoot ironically and the one where it made its way into the history books- the first ever on-screen decapitation. It’s blatantly shoehorned in and makes no difference to the plot, save having to suspend our disbelief any longer that the “old poacher” is clearly a very young man with a stick-on beard, but it’s brilliantly done and a real show-stopper. One can only imagine how the audiences of 1963 reacted to it. Obviously Herschell Gordon Lewis has upped the ante (and in full colour no less) a few months before with Blood Feast, big we see a head actually flying off it’s body here and it’s a real moment.

When it all comes to a conclusion it’s not exactly satisfactory, but it works just enough. Magee pulls a Loomis and appears out of nowhere in a trenchcoat with a pistol and we get a perfunctory explanation. Oh and he puts an axe in the face of the waxwork figure of a child just because he’s not creepy and weird.

Dementia 13 isn’t a great film, but it is a fun, strange rollercoaster of a film that does what it sets out to do – entertain. Sure it’s flawed. It couldn’t not be, being made under those circumstances, but it’s also got enough great moments that more than outweigh any weak spots. 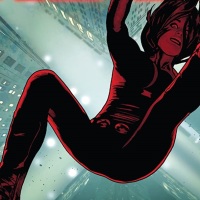