Herbert West and Dan Cain are working on the ultimate scientific endeavour, to conquer death itself. Funded by Erica Clapham-Lee, Herbert however is not the only West attempting to break scientific boundaries. Herbert’s son Mike is following in the footsteps of the great Crawford Tillinghast in an attempt to penetrate the walls of the beyond and find Erica’s missing grandfather.

I have to confess that I entered into this story with more than a little trepidation. H.P. Lovecraft has proven quite difficult to successfully translate to comic book form, and it has to be said that there have been some exceptional works over the years that have set the bar extremely high. Alan Moore’s unparalleled Providence saga and Gou Tanabe’s incredible visions of At The Mountains of Madness, The Hound, The Temple & The Nameless City are prime examples of just how you adapt Lovecraft and the Lovecraftian to the comic format. 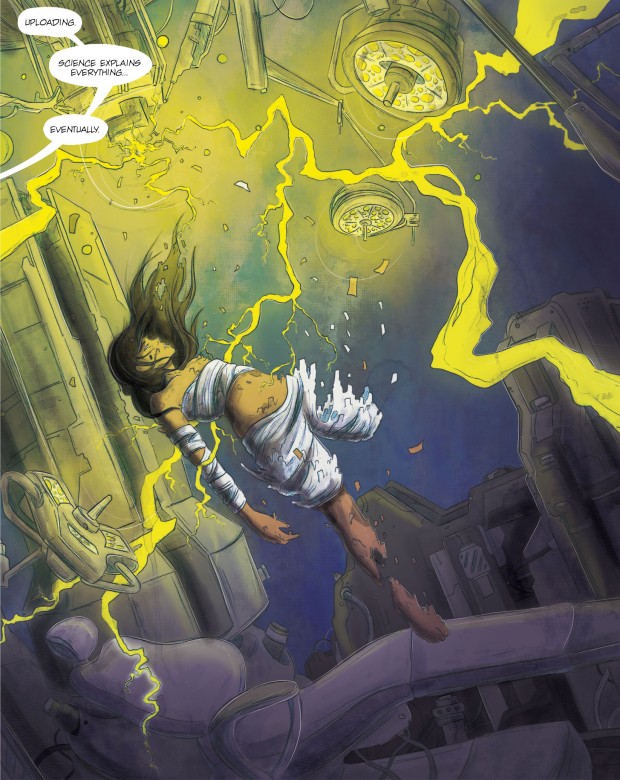 Hand on heart H.P. Lovecraft’s original story is not one of my favourites. For me it’s needlessly repetitive and could have told the same story with much more impact in about a third of the page count. Admittedly this is probably because it was originally released as a serialised story which really shows in the stilted delivery and overuse of recaps and cliffhanger’s. That being said, I’m shamelessly in love with Stuart Gordon’s 1985 movie which, although obviously played as a horror-comedy, really does take a dreary story and inject it with energy and a structure sadly lacking in Lovecraft’s short story.

This reimagining of Re-Animator is actually pretty impressive. I think that the way Andy Perry has taken the original story, injected a modern twist and woven in aspects of From Beyond and The Divine Comedy, works really well. While the 1985 movie played to schlock and the grotesque, Perry’s vision is more focussed on building drama and delivering more of a horror thriller. It would be enough to take this story and make it more coherent and punchy, but I really like some of the embellishments like taking West’s nemesis from the original (Major Clapham-Lee) and making him the original pioneer in West’s field. Having his granddaughter Erica funding both Herbert and Mike’s research with distinctly ulterior motives (besides making her company billions of dollars) is a great twist, and helps drive the drama and tension in the West family.

The process of reanimation that West and Cain are employing in this series is really interesting, the idea of physically uploading a corpse into a sort of Matrix-meets-Star Trek teleporter style machine and then downloading that pattern as a living human being is a fantastic sci-fi addition to the plot. What it enables the story to do is move away from the cellars and crypts of earlier adaptations and into a world where this process could become a product. Although it does take some of the edge off of Herbert West’s frantic crazed and murderous personality, the introduction of a family leads to a completely new and more relatable set of drivers to complete his work that I won’t spoil for you.

Lyndon White’s artwork in this series was a little erratic for my tastes. There are some very well executed panels and pages, and some really great visuals and design work overall, but there are also times when the characters are shown as being very cartoony, which can’t help but take the reader out of the tension and drama. I will say that I found White’s depiction of Mike West’s journey into the Beyond to be superb though, and he really does pull off a fantastic vision of a vast and otherworldly realm.

On the whole, I really enjoyed this book, and I’m actually really looking forward to seeing where the next instalment in this six-part series takes us. I think if you can forgive that the artwork doesn’t always land the punch then this is an adaptation that is well worth a look.