Considering that the high-point of Jason Aaron’s narrative for issue eleven of Avengers is arguably Thor snogging in the Savage Lands with the She-Hulk, it is probably a safe bet that many of this book’s 52,820 readers could well understand just why the title saw a disconcerting drop in sales of almost twenty five thousand copies in December 2018. Indeed, despite this twenty-page periodical featuring some of the most flamboyant international superheroes in the Marvel Universe, such as Captain Britain, Michael Twoyoungmen, Arabian Knight and Shiro Yoshida’s fiery alter-ego Sunfire, the Aaron’s plot doesn’t get any more exciting than having Ursa Major teleported back to Siberia for forgetting his table manners, and a deluded Phil Coulson apparently gunning down a mysterious victim in cold-blood simply because the bound figure refuses to denounce Captain Rogers as a traitor..?

Instead, this comic seemingly offers some nonsensical insights into Robbie Reyes’ homework memorising “Steve’s super villain recognition quizzes”, and the God of Thunder enjoying “turkey legs, mead and dinosaurs” whilst dating an utterly bored Jennifer Walters in Ka-Zar’s kingdom. Admittedly, there is some fun to be had from watching the Ghost Rider desperately plead his case to Captain Marvel that he shouldn’t need to study having “single-handedly defeated the Final Host”, and Jen’s suddenly realisation as to how deep Odinson apparently cares for her when he finally opens up as to his true feelings for the former member of the Fantastic Four. However, alongside the Black Panther’s ‘star-studded’ International Super-Summit, such interludes disappointingly provide the backbone of this book’s contents.

Frustratingly, this publication’s interior artwork doesn’t do much to help remove the impression that the entire comic was only printed as a ‘filler edition’ either. It’s clear, just from the first appearance of S.H.I.E.L.D.’s former Supreme Commander and Thor’s riotous obsession with warring battle dragons, that both Ed McGuiness and Cory Smith are prodigious artists. However, there are only so many splash pages a bibliophile can surely peruse featuring either Coulson or King T’Challa before it becomes abundantly obvious that Aaron’s script was distinctly lacking in content; “I apologise for the disturbance. But we should not allow this unfortunate business to derail our summit. We have much to discuss. Iron Men. Clean up this mess.” 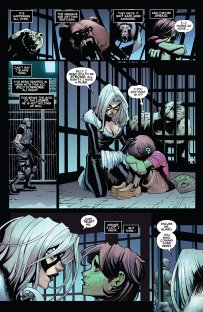