Max Winter ekes out the latter years of his life as a pulp fiction writer, telling the tales of The Red River Kid, outlaw and adventurer. However, 1930s New York, however is a tough place to live, with poverty and cruelty around every corner. When a mugging finally pushes Max to the edge and an old acquaintance asks for assistance in exposing and hampering the growing groups of Nazis in the City That Never Sleeps, he will reach back to the days when Red wasn’t just a character in a book, the days when Max rode the west as outlaw and hand of vengeance.

Okay, before I get started, if you’ve never read anything by Ed Brubaker and Sean Phillips then I insist that you stop what you’re doing and go out and buy one of their books immediately. It doesn’t matter which one (although I can highly recommend this one), just go and buy one. In the world of noir and neo-noir comic fiction there is, in my humble opinion, nobody that can match this pair. For me, they are the absolute pinnacle of the genre, and while there are some exceptional stories hitting the shelves at the moment (Aftershock’s Undone By Blood and Image’s That Texas Blood being superb examples), if Brubaker and Phillips release a new book, I will automatically add it to my pull list no questions asked.

Pulp is a neo-noir/western/thriller/crime graphic novel that doesn’t pull a single punch from the first page to the last. This is a story imbued with Brubaker and Phillips’ trademark dark, gritty worlds and world wearied, beaten down and time scarred characters that are so solid and real that you find yourself drawn straight into the narrative from the very first panel.

There has been something of a resurgence in Western themes and stories of late – the two titles I mentioned earlier, for example – but this isn’t new territory for Brubaker and Phillips, and it’s one they’re eminently comfortable with.  This shows in just how smoothly they interweave the separate timelines of this story together, both in terms of the narrative and artwork.

Max Winter reminds me very strongly of Bruce Wayne in Frank Miller’s The Dark Knight Returns. His return from “retirement” follows a pretty similar path, as the once-feared outlaw watches his world fall into chaos and decadence, the weak preyed upon mercilessly and petty injustice piling on and on until he is forced to act. Okay, so Max’s initial return to his former life is for less than saintly reasons, but ultimately he is pushed too far by a great and terrible crime that he cannot let stand. This is also very much following in the footsteps of films such as The Gunfighter, True Grit or The Shootist. Max is the archetypal gunslinger facing an undignified end to his life and looking for a way to protect those who he has built his later life around while going out with some of the spark and fire of his youth.

I love this kind of story, it’s very focused and self-contained and doesn’t procrastinate about getting where it’s going. In 80 pages, Brubaker & Phillips deliver a taut thriller with characters that you genuinely become invested in. This is a film in comic form. If I could have my choice, I could see Max being played by Henry Fonda, John Wayne; Charles Bronson would be an obvious choice, but I could also see Mel Gibson or I think Sidney Poitier would have been a great choice. For me, that’s one of the things I’ve always enjoyed about this creative team’s work, I’ve always felt that what hits the page is something that could (and in many cases should) be developed for the big screen. That’s not to belittle the medium they’re presented in at all, I just think it just reinforces why they are at the top of this genre and have been for so long.

Visually, this is another outstanding piece of work from Sean Phillips. I have long been a fan of his work and for me, if you’re looking for a template of how to illustrate Noir, Phillips is the name that would always be at the top of my list. There is a very different tone and style to the two timelines in this story. Phillips’ style is always sparse and with a limited palette, but the Western parts of the story are even more sketch-like and if possible, the palette even more limited, but the effect works really, really well making Red seem much more alive and vital than everything else around him. This contrasts with a much darker and faded world that Max inhabits, which echoes both his physical decline and that of the society around him.

As I said above, if you aren’t already reading Brubaker and Phillips’ work then please do yourself a favour and pick this up, then go out and buy the rest of the back catalogue. I promise you won’t be disappointed! 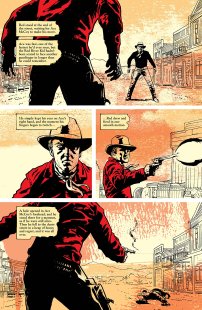