I love monsters. I love hunting. Give me a game like Monster Hunter or Far Cry Primal and you can be assured I will end up clocking over 500 hours game time on my Xbox. Horizon Zero Dawn ticked all my boxes for a game I wanted to play (the only issue being that it was wrong console), but luckily once again comics provides, so let’s see how this popular game handles the jump into the world of comics. 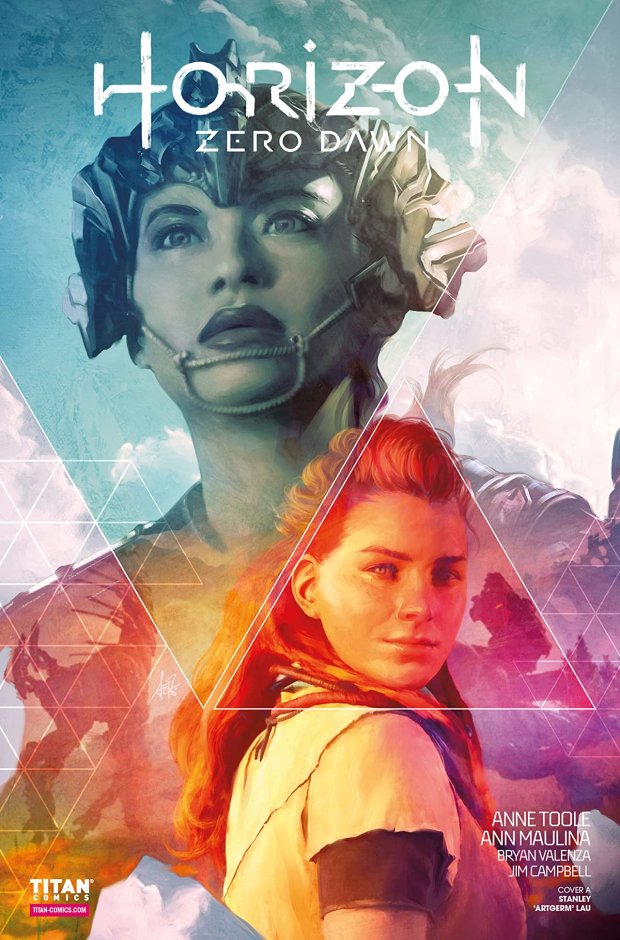 Before I get started, it’s worth pointing out that the covers are absolutely stunning for the first issue.  I mean, just check out the Artgerm variant above! In terms of the comic itself, Ann Maulina’s artwork is very stylised, which provides a bit of a contrast to the hyper-detailed game. In the game, every mechanised beast is designed critically, making sure you can see exactly how their body functions to match their behaviour, and while I understand comics cannot always afford to be quite as detailed, this issue does a great job building up your expectations.

The art style used is a perfect way to imbue threat and momentum during crucial moments. Guerilla, the team behind the PS4 game, hired animal experts to create accurate movements for each of the machines, but with the style here, the focus shifts into the characters’ responses to deliver the nature of each of the creature.

As a prelude to the comic’s story arc, we are provided with a very quick catch-up guide to the world of Horizon Zero Dawn, delivering some important key points about characters, the Clawstrider and the story’s place in the game’s timeline.  During the main game you play as Aloy, who is often claimed to be one of the best written female leads in modern day gaming. Her quest leads her to unearth the secrets of the machines’ past in order to create a safer tomorrow. This follow-up series has been spearheaded by Writers Guild Award-winner and one of the writers of Horizon Zero Dawn game Anne Toole, and I fully expect that this series will keep fans happy until the sequel’s PS5 release.

That said, I can’t help but think that this issue needed to be a little longer in order to really establish itself. While the issue is a solid read, it didn’t do a lot to draw me in as a newcomer to the franchise.  At the same time, I can definitely see it as a solid platform to launch the series for those more familiar with the game.  Don’t get me wrong, the comic tried its best to catch me up with its prelude information but I felt like I needed more time spent with Aloy and the supporting cast. I was very aware of what was happening, but there was really nothing to anchor my interest in the new (to me, anyway) characters. I’m definitely look forward to reading the future issues, but this definitely feels like a series for seasoned HZD fans rather than curious newcomers.