December 2017 saw the launch of my single favourite DC Elseworld series with Sean Murphy both writing and illustrating the eight-issue limited series Batman: White Knight. Somehow this series completely passed me by even with all the vocal fans on the internet. At the time I was struggling a little to enjoy Batman, with the character seemingly being locked into the same stories in an endless cycle. White Knight was a strong alternative to the core Batman narrative that I regret missing out on the first time around. Some years later as the hype died and the fans still held proud, I took a chance on the graphic novel, discovering 168 pages of innovative writing and visual pleasing content which was perfect for this particular tired Batfan.

In the first outing we pitted a forcefully sane Joker against a Dark Knight who was very much at the end of his Batrope. The former Clown Prince of Crime is now a man of the people by the name of Jack Napier. By gathering Gothamites with cunning but legitimate means, he outlawed Batman. Using public records to prove the detriment of the Caped Crusader kept the story grounded in reality, while making Batman into the villain of the story’s narrative with ease. Simply showing the citizens that the money spent in natural disaster relief was instead being spent to maintain the city from Batman-inflicted damages.

Following the success of volume one, I found myself eagerly counting down to volume two. And after a painfully long wait (although admittedly not as painful as it would have been if I’ve picked this one up with everyone else) here we are with Curse of the White Knight, a brand new eight-part miniseries which brings fan favourite Azrael into the Murphy-verse. 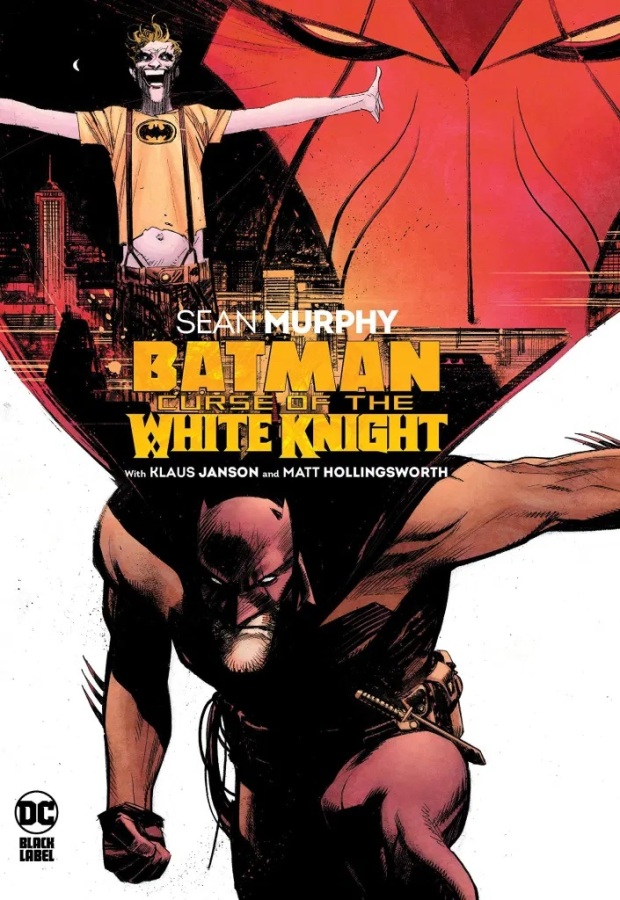 Let’s start with the artwork, shall we? Sean Murphy’s distinctive can can be spotted a mile off with its stunning backgrounds and unique character designs. Personally, this is the best Batsuit in comics for me. Its stunning. Just stunning. The high collar and the cowl shape feed into Murphy’s style beautifully, using heavy shading to add emphasis to people’s stature and importance. The simple look of the Joker/Jack Napier character is a pleasant change that is very in tune with the story. Every single member of the supporting cast is very reminiscent of their main continuity appearances, while still being distinctly Murphy. However, one character above all has honestly never looked better. Take a bow, Sean. Azrael has peaked. 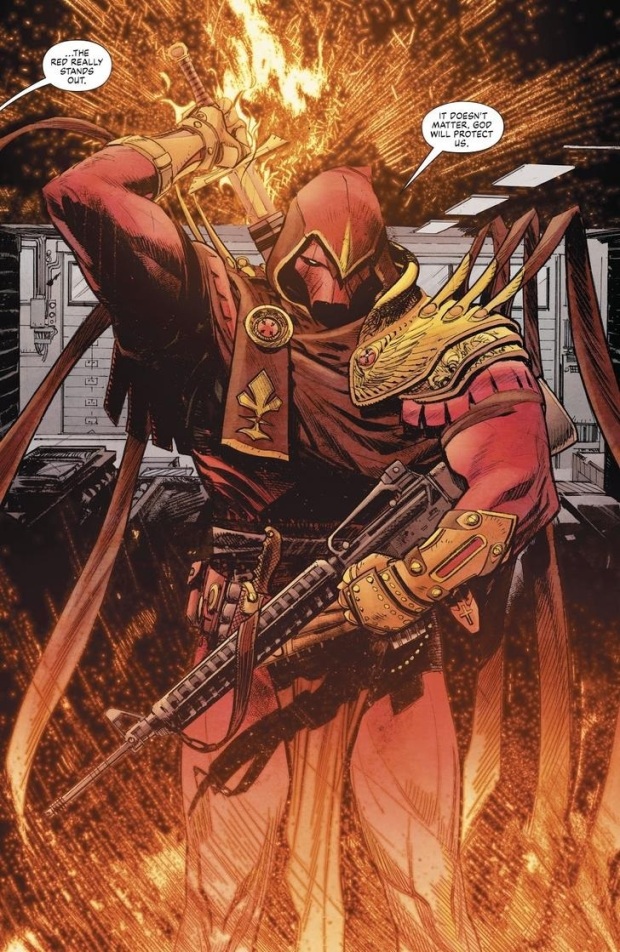 This story takes inspiration from Knightfall. Gotham has been restored to some semblance of order following the Joker/Napier war on Batman. Latterly, The Napier Initiative has been introduced to prevent the Gotham Elite from keeping a vice grip on Gotham using its super criminals to fan the flames for their own benefit.  Joker wants to rock Batman’s world by unearthing history of Gotham’s most famous family, with Gordon, Batgirl and Nightwing as front-line soldiers for the GTO, the Gotham Terrorism Oppression unit. Between the Joker and he Gotham Elite a war between Azrael and Batman begins. Sean Murphy sets a blood rivalry early on into the story with dual timelines. Visiting Edmond Wayne, we find out the corrupted history of two key Gotham houses. Jump forward and their ancestors continue the fight. 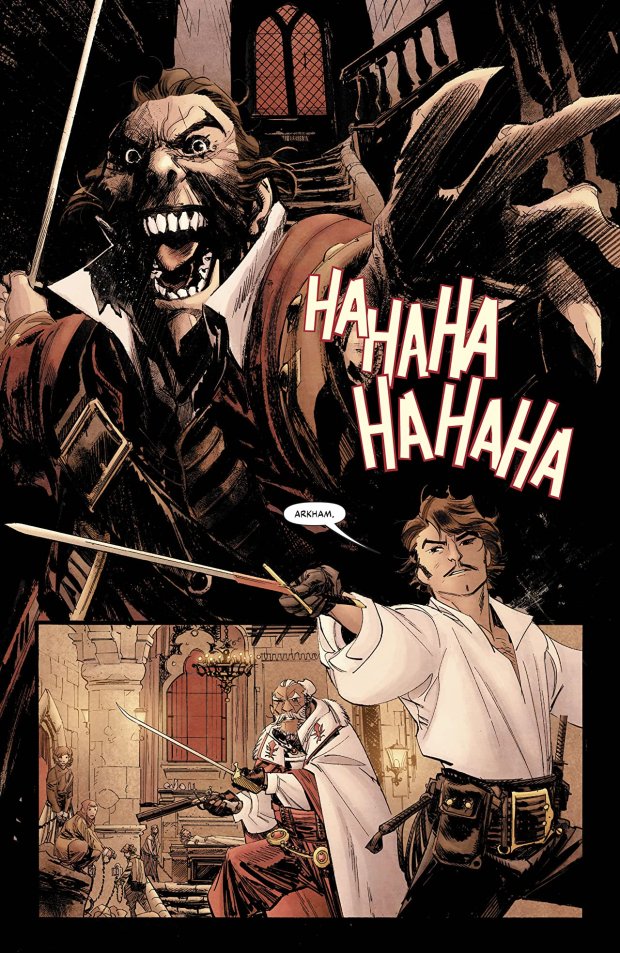 This a story that knows its strengths and sticks to them. The alternative take on the Batman attitude leads to many interesting moments. Every time we stray from the well-beaten path we are welcomed by something familiar. The core Batman relationships are heavily supported with even the smallest interactions, but the unlikely relationships shine brightly, starting with Dr Leslie Thompkins who is frequently bought in to discuss the state of the Joker/Napier entity. In Curse of the White Knight the Joker flips between his two personalities with Jack Napier being very dormant. Leslie is the good doctor assigned to assist with balancing the two in regards to Batman’s investigations. Dr Thompkins is written very strongly as the voice of reason, but with shades of maternal affection and protection towards Bruce. I may be wrong here but she may be the only maternal figure for Bruce since that fateful night at the cinema. The dialogue between them often displays their bond, but only in fleeting moments between their professionalism.

My favourite of the relationships is that with Harley Quinn. She is very refreshing with her new responsibilities and motivations. No more pining after “Mister J”, but rather the healthier Jack Napier lurking beneath.  Giving the psychopathic relationship a break in the Murphy-verse has done the character wonders, and giving her more autonomy and a more personal relationship to Bruce reminded me of the lovingly remembered episode of the Batman Animated Series Harley’s Holiday. A story about a certified sane Harley struggling to keep out of trouble as it hunts her like a dog. Murphy presents this as almost a sequel to childhood classic episode. 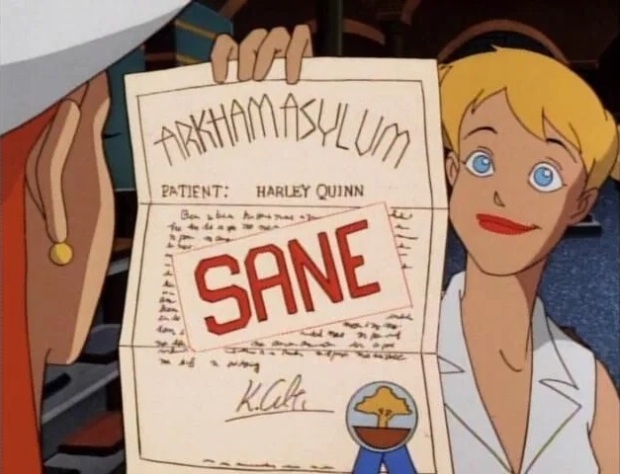 So, why should you read Curse of the White Knight? It’s an adult Batman story focusing on consequences rather than the super hero fantasy. It focuses on characters who don’t get much spotlight, like Azrael, and puts a different spin on more established faces, making the book feel familiar yet fresh. It’s perfect for the tired Batman fan. It’s perfect for the realistic readers. It’s perfect for me. The narrative is twisty-turny with very rewarding reveals that impact the past as much as the present timelines without any time travel nonsense. The art blesses every panel with the Murphy-verse signature, but most of all, for me, it features genuinely fresh character designs that will be iconic on their own merit. I hope you enjoy this book as much as I do and have the same excitement for the next instalment with Harley Quinn: White Knight.