Oh boy, buckle up for the TMNT story we all needed. No foreplay this week, I’m diving straight in to my review because this is a strong read and I’m already lusting for the next issue. 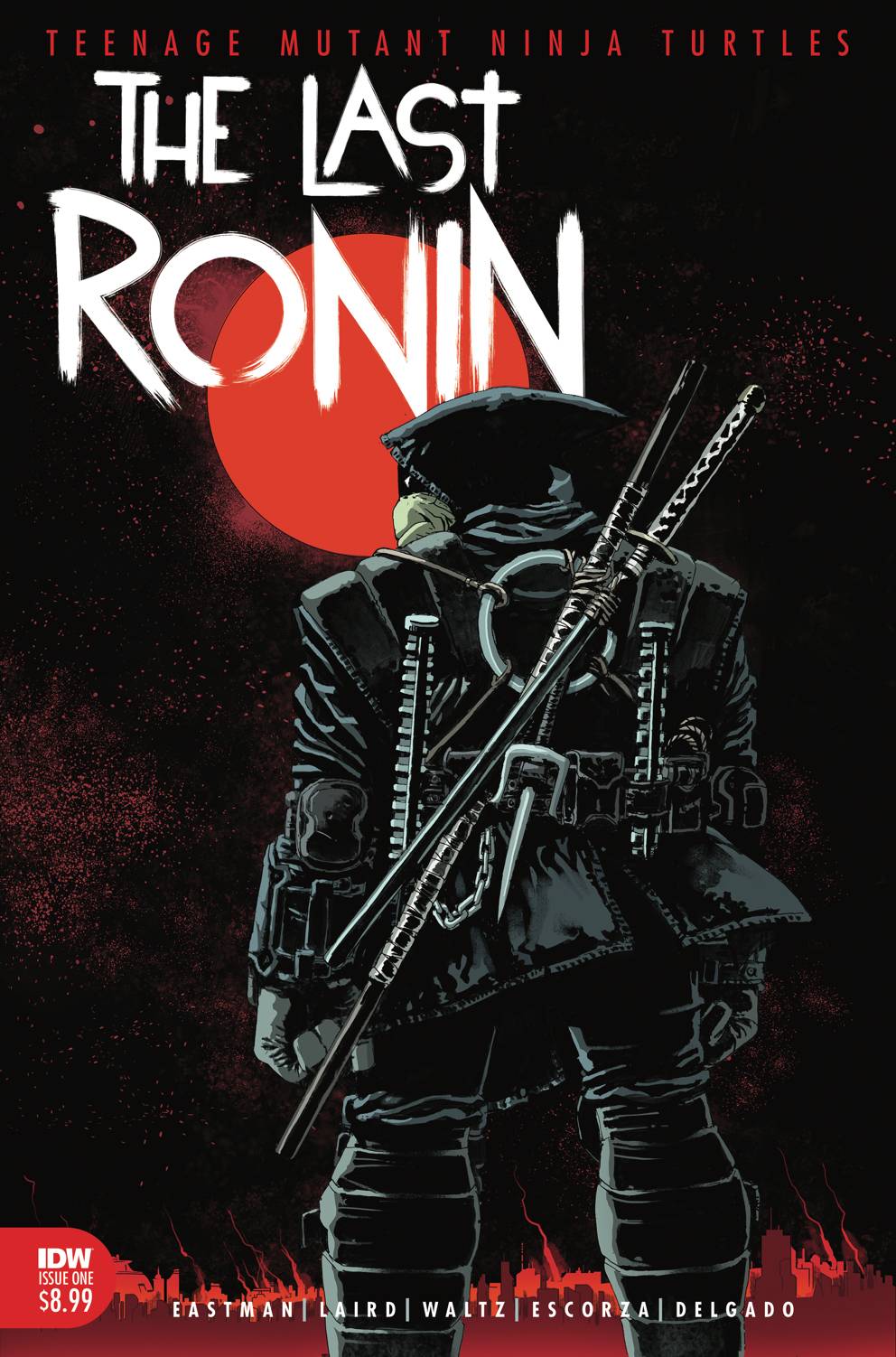 So let’s start off by stating how little we actually know about this 5 part miniseries. Firstly, we aren’t sure how far into the future from current continuity this story takes place.  But the questions only start there. Who ended the lives of the other turtles? Who of the old cast is still around? How have events changed the world around our surviving turtle? Oh, and the big one, which brother is this? Seriously this series went to print with no one but the creators knowing any of the above, and we still all clamoured to buy it.

The story starts with a strong building of the admittedly obvious tone. Our lone turtle has gone full Batman, brooding in shadows with little to no happiness or optimism in any of their dialogue, spoken or otherwise. The death of his brothers clearly weighs on them heavily. The city around them has developed into a busy sci-fi hub with a clear Mega City One vibe, and is patrolled by a fully mechanised police force which bears a strong resemblance to Robocop.

I really dig it. All the future tech in this issue also resembles the future tech from past Turtle stories, which is a great touch. Also, having Mousers is always a win for me. In this timeline the city is run by one Oroku Hiroto, the current Master of the Foot Clan and Shredder’s grandson. The tension between them is quickly built through some very careful dialogue. 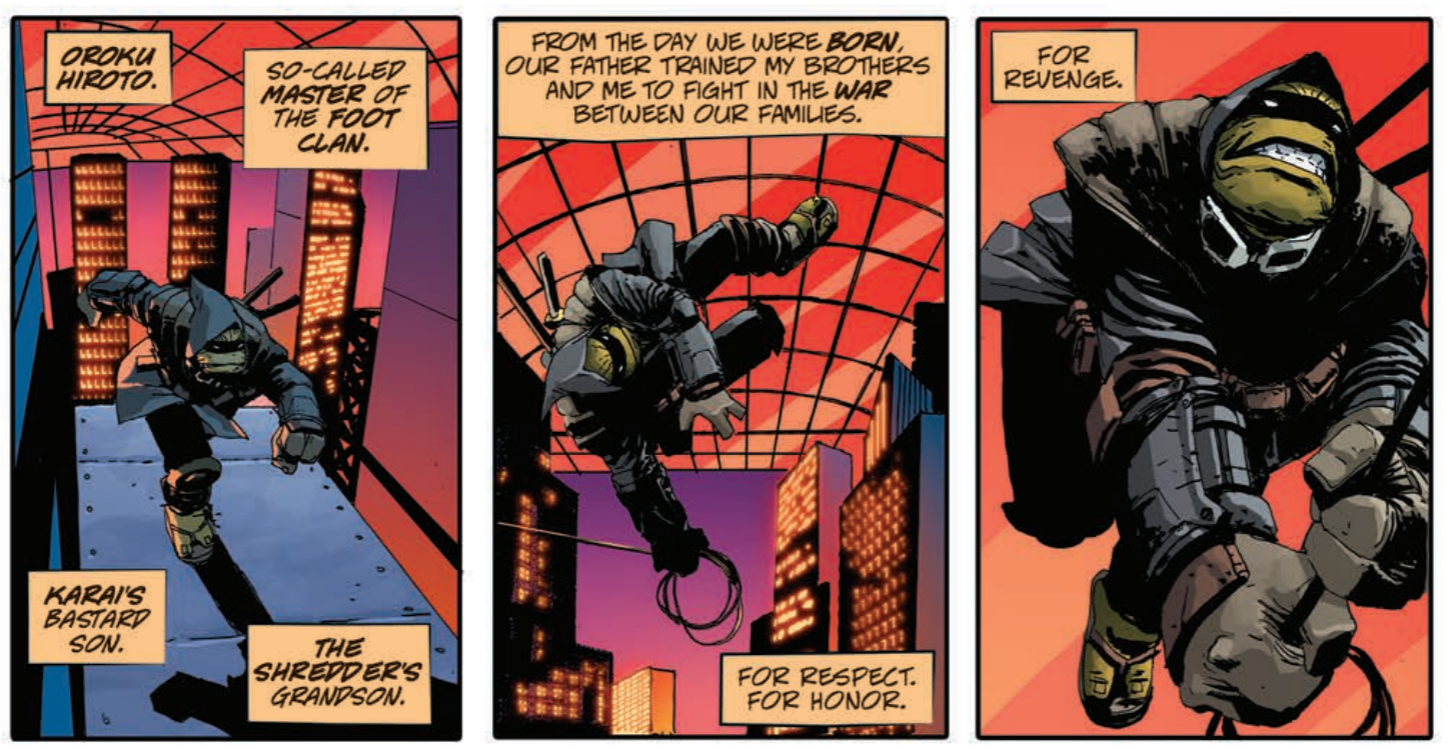 The majority of this issue follows our turtle through an infiltration of New York City, surrounded by a radioactive wasteland which further leans into the Mega City One vibe which I am very much thrilled by. Everything outside the borders is unfit for humanity but lucky for our turtle, he is far from human as he so keenly reminds us. His pride in being a turtle has developed to coincide with a lesser view of humanity in this timeline. The grandson of Shredder and villain of the story, Oroku Hirato, rules the city in a tech-heavy tower. From here he commands the legion of technological threats to our turtle.

Artists Esau and Isaac Escorza have done a stellar job of incorporating the old with the new. Every detail, from the fallen turtles’ weapons to the mousers and the returning characters screamed out to my childhood. The visuals of New York follow similar traits, with recognisable features blended in with the futuristic look. The most noticeable visual aspect however is the pained facial expression of our turtle. Every time we see one expression we feel shades of another. The facial structure is portrayed in a way that it fits all four bothers yet could also be distinctly one named turtle. Adding this nuance into the story is a treat we didn’t deserve as the reader but a mystery we wholeheartedly cherish.

All in all, this is exactly how you write a compelling TMNT story. We know so little going in but learn so much throughout the course of these pages, with the opportunity for even more development over the next four issues. Many past actions will have ripples in this timeline with gold nuggets surfacing regularly.

IDW has been on a huge roll lately, and this is just the latest offering in a parade of Turtle treats. We have however visited a story very similar to The Last Ronin in the Teenage Mutant Ninja Turtles Animated Series, entitled “Same As It Never Was”. This story features Donatello facing a similar future. If you can’t wait for the next issue, enjoy some nostalgia with even the title for the episode being an Easter egg in this issue.