The heyday of atomic age horror was long gone by 1964, while a new era of gory, graphic violence was just starting to break through. One film would combine them both though, with its post-war mad science plot bolstered by some sudden and surprisingly shocking visual effects.

The writer had already been responsible for creating DC Comics’ ghostly hero Deadman as well as the Doom Patrol, the misfit superteam assembled from accident victims and would go on to co-create the original Guardians of the Galaxy with Stan Lee for Marvel.

Herschel Gordon Lewis’ Blood Feast the previous year had opened the floodgates for gore, but was clearly marketed as being strictly for adults only. The Flesh Eaters on the other hand, slipped in unnoticed on the American all-ages double-feature circuit, meaning a generation of the nation’s youth were exposed to a film that might look like just another mad science horror, but would feature brutal violence, nudity, visceral monster attacks, graphic depictions of injury and death, nudity, nazi experiements and even an attempted rape. 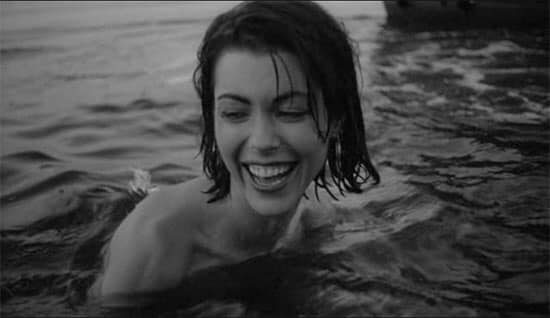 When over-the-hill actress Laura Winters (Moreley) needs to get to a dress rehearsal in Provincetown, her PA Jan Letterman (Wilkin) convinces pilot Grant Murdoch (Sanders)to fly them out of New York, despite warnings of a tropical storm in their way. His misgivings prove prescient as it’s not long before they are forced to land on one of the many small, uninhabited islands that pepper the coastline on their route.

The island they end up on isn’t entirely uninhabited, though. Living in isolation to conduct his experiments is marine biologist Professor Bartell (Kosleck). The German-accented scientist is initially welcoming to the strangers, but is hiding a dark secret. His experiments, developed while working undercover with the Nazis no less, have produced a glowing, predatory microbe that can strip the flesh from a human being in seconds…

Herschel Gordon Lewis might have kicked off the whole gore thing with 1963’s Blood Feast, but The Flesh Eaters is a much more effective film in every way.

Like its predecessor, it doesn’t shirk on graphic depictions of violence and its effects on the human body, but it also is well made, with a strong cast working from a solid and interesting script, one with ideas beyond mere shock and revulsion. Crucially, it also feels like a bridge between the atomic age horrors of the previous era and the transgressive cinema that the genre was soon to develop into.

We’re on familiar territory from the off, with Drake’s script echoing the opening of The Incredible Shrinking Man, with a young couple out on a boat out on the ocean, blissfully unaware of the danger they are in. Previously seen in a small role in 1957’s Blood of Dracula, Barbara Wilson grabs the attention here jumping topless into the water before being consumed by the as-yet unknown menace. It’s tastefully done and there’s no explicit nudity, but even this feels like a small corner being turned. It’s wonderfully tense and goes from light-hearted to nightmarish in a heartbeat, much like a certain shark attack in the waters off Amity Island would a decade later. Was this an influence? It certainly looks like it might have been.

The main cast are fairly cookie-cutter, but they work perfectly by dint of Drake’s natural and sharp dialogue and the actors delivering his words. The acerbic drunk that is Laura Winters is a real highlight here, drowning the insecurity about her fading career with booze while lashing out or hitting on anyone that comes into her orbit. She should be an unpleasant character with all that going on, but you can’t help but feel sorry for her and even liking her in a way, which is a testament to both Drake and Morley’s talents.

Naturally, Martin Kosleck’s evil scientist is the other scene-stealer here. A mere 19 years since Nazi scientists were making their way over the Atlantic in the aftermath of World War II, Professor Bartell had made the same journey after a spell as a spy in the laboratories of the Third Reich. While there, he had come up with his flesh-eating microbes (tested on naked young women, obviously) and has continued his experiments on the island. Bartell is clearly a mad scientist from the moment he appears, but Kosleck reigns him in just enough to make him plausible.

It’s not long before he’s framing Miss Winters for letting the plane drift away, murdering a random beatnik (it’s that kind of film) and even trying to rape and murder the unfortunate actress, while generally chewing the scenery like the black villain he is.

Naturally, he’s at the heart of most, if not all, of The Flesh Eaters most shocking scenes and for 1964, they are pretty shocking, That attempted rape is jarring, if thankfully not the most graphic, but the stabbing and burial that follows it really feels like a new world of era of horror cinema, one where real-world horrors happen to real people.

Murdoch’s bacteria-induced leg injury is surprisingly graphic too, especially in a black and white film that still has all the style and trappings of a 50’s sci-fi flick. It’s not the biggest injury or even received in the most dramatic of ways, but when you see it, it’s gore. Proper gore, the likes of which we’ve never seen before, certainly not from the reliably shoddy hands of Herschell Gordon Lewis anyway.

What else? Oh, there’s a shooting that comes right out of the blue. Not any old shooting, it’s a face shooting, sudden and from close range. And it’s not even the last face-shooting we see, either. There’s no messing about in this film. The flashback scene to the Nazi experiment camp was a step too far though, meaning the full-on nudity was snipped away, but watching it you can’t help but appreciate the gloriouly trashy combination of mundane, sadistic evil and overt eroticism. Nazi Sexploitation cinema was a god few years off, but Jack Curtis most definitely was testing what you could get away with in a regular feature. It was sadly a little hot for 1964, but it’s pretty tame by modern standards.

Horrific in a different way would be the arrival of the beatnik on a raft. He’s the heppest of cats, all groovy chat and mannerisms, but he also feels like he’s floated in from a different movie. He’s nothing but counter-cultural cannon-fodder though and both his complicated death and subsequent desecration is another extreme scene in a film that has more than a few of them. 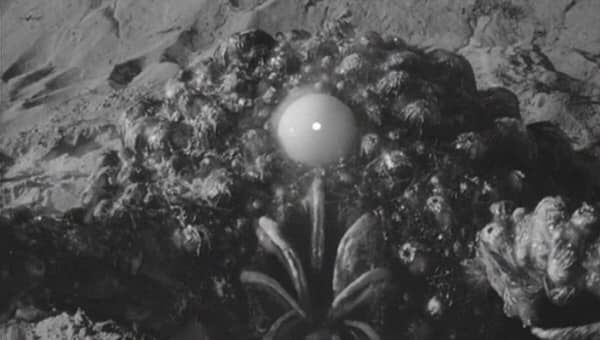 A movie like this stands or falls on its monster though, but despite for the most part The Flesh Eaters being a clump of bacteria, they still step it up in the end to become a towering, glowing behemoth of a thing. There have been better giant monsters to come out of the ocean, but this one still feels dangerous, making Murdoch’s decision to head out and face it mano a mano all the more ludicrously thrilling.

The Flesh Eaters is a strange film. With one foot firmly in the past and one in the future, it feels like a film out of time, one that’s at once familiar, but surprising at the same time. It’s a nasty little thing at times, but it’s never anything less than entertaining.