I continue to wrestle with my feelings towards Train to Busan Presents: Peninsula, and it’s mildly frustrating. On one hand, the movie is every bit as entertaining as the 2016 hit Train to Busan, but there are still problems which seem major yet feel minor when you look at the final product as a whole. So, I’ll start this review with a caveat by saying Peninsula is enjoyable, but I’m still mildly irritated by the film’s ending.

In this latest release, director Sang-ho Yeon returns with another group of survivors. Four years after the initial incident, this group is tasked with returning to the mainland to retrieve a truck containing 20 million dollars. The mission is simple enough: deliver the truck and receive 10 million divvied up amongst the surviving members. The team manages to successfully reach the truck, but mayhem ensues once they try to escape the city.

Peninsula delivers on all fronts: horror, action and heart. If Train to Busan was Yeon’s Night of the Living Dead, then Peninsula could be considered his Dawn of the Dead.

The movie starts on a heart-breaking note, which will come back to bite us over and over again. With the exception of the American actors, the opening sequence before the title card is a great. It’s filled with dread and the ship’s tight confines and Yeon’s use of close-ups only add to the nightmarish scenario. Sadly, the film never goes back to the events on the boat; however, there are a couple of flashbacks that are very effective.

There’s a significant plot point that takes place at Unit 631’s compound. It isn’t my favourite, but it does contain my favourite set piece: The Arena. Here mercenaries bring survivors back to forcefully participate in a Thunderdome-like setting with the undead. Rather than a dark and dank basement, the Arena is brightly lit with yellow, sickly lights and black, glossy stagnant water. It’s very stylized and almost cartoonish, which makes the ‘games’ seem even more depraved.

The biggest action sequence in Peninsula is its climatic car chase, which delivers a blend of the Fast and the Furious and the Wachowski’s Speed Racer. Cars flip and fly through the air, turning the city into a demolition derby as vehicles smash into one another and hordes of the undead. Unfortunately, this sequence is troublesome because of the heavy usage of fairly bad CGI. Essentially, the movie turns into a video game cut scene, and an outdated one at that.

As I mentioned before, the biggest issue I have with the movie is the ending. It’s tone deaf and, to be blunt, a little ridiculous. That said, it did pull at my heartstrings. The moments leading up to the final sequence are intense and gripping, thanks to both the actors and the score. The score can really be on the nose at times, but it’s still incredibly effective. However, all that forward momentum is lost with a single (unrealistic) decision. It betrays everything the movie has seemingly been building up. Sure, there’s something to say about subverting an audience’s expectations, but that approach only works when it’s done well. Don’t get me wrong, the scene itself is executed well, but it simply doesn’t fit the tone the movie was going for, and feels jarring as a result.

Other than that, the movie is really good and a worthy addition to Yeon’s Train to Busan franchise. The cast is just outstanding. Dong-Wong Gang plays Jung Seok and is a great leading man. He and Do-Yoon Kim (who plays Chul-min) are unrecognizable after the time jump. I appreciate Gang’s movements with a gun. They’re precise and efficient similar to Keanu Reeves’s John Wick. Jung-hyun Lee is Min Jung and conveys all the layered emotions a mother would feel trying to survive in a zombie apocalypse with her two daughters. She’s basically Sarah Connor with a heart. Her girls are Jooni and Yu Jin played by Re Lee and Ye-Won Lee respectively, who manage to be adorable yet deadly. They inject a level of energy that the movie would be missing if they were cut from the film entirely. The antagonists Min-Jae Kim’s Sergeant Hwang and Gyo-hwan Koo’s Captain Seo are perhaps a little over the top, but are reminiscent of Joseph Pilato’s Captain Rhodes in Day of the Dead. 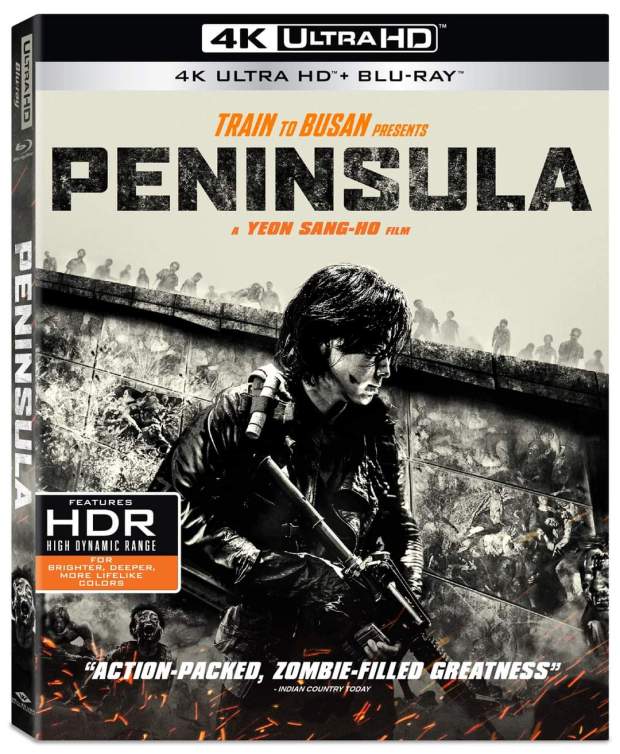 The Big Comic Page was provided a preview copy of the film, and the bonus features are really lacking. There are four featurettes that go “behind the scene” of the production but it’s mostly a static interview with Yeon, Lee, Lee and Kim which clocks in at under 10 mins. The teaser and trailer for Peninsula are included as well as. The other bonus content is for other Well Go USA Entertainment films such as Possessor, Deliver Us from Evil and Synchronic.

While there is an English dub available, I highly recommend watching the movie with subtitles and the Korean audio. The English dub voice actors don’t fit the characters and they don’t convey any emotion when compared to the original audio.