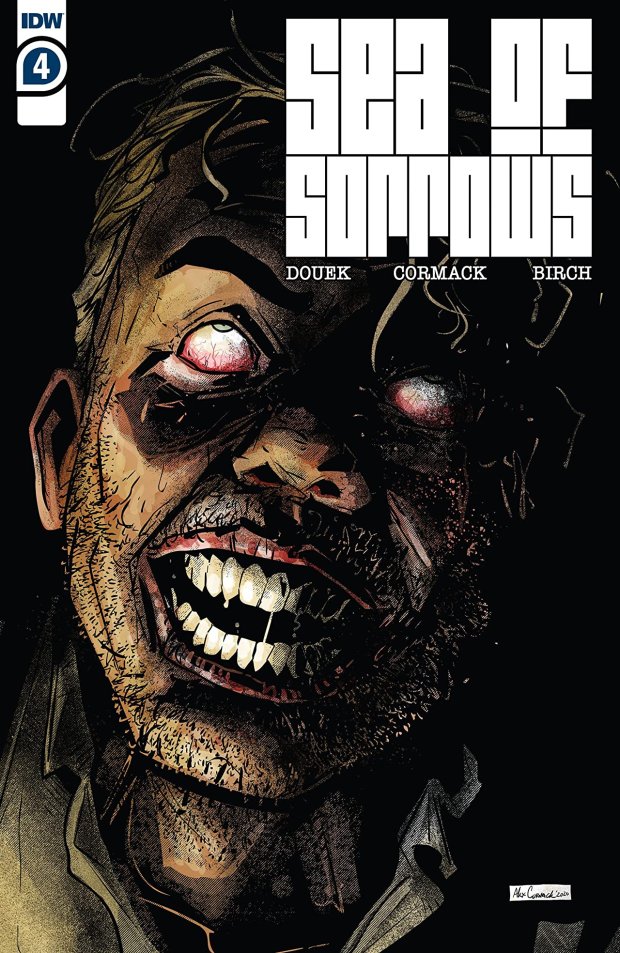 Last month, I thought that the tension and madness in Sea of Sorrows had built up to such a crescendo that the remaining issues were going to be a hysterical, fever fuelled rollercoaster ride into hell. Well, having just read the latest issue of the series, I feel like I’m standing alone on a beach watching a mile-high tidal wave rush towards me; a wall of water full of broken ships and the detritus of millennia from the bottom of the ocean, hurtling towards me at over 500 miles an hour. I know there is no point in running, I just have to stand and face this beautiful, horrifying, force of nature, arms stretched out to embrace it as it consumes me entirely…

In Issue #4 of Sea of Sorrows, Rich Douek delivers an absolute masterclass in how to let all hell break loose in a story. It’s disorienting, claustrophobic, feral, visceral, and utterly horrifying. Things go very wrong very fast, and there’s not even time to draw breath as you are dragged along in the wake of what, page for page, has to be added to my list of the best single issues I’ve read.

This issue has the paranoia, tension and horror of John Carpenter’s The Thing with the energy of James Cameron’s Aliens. There’s so much going on here, from things going sideways horribly for Nick and Deke at the wreck, to an insane and homicidal Jim breaking free of the brig, to a pitched battle on the deck between opposing factions of the crew and one crew member revealing himself as the North Atlantic’s equivalent of Sam Neill’s “Doctor William Weir.” It’s all immersive to the point where I was visibly flinching in time with the action.

The artwork here is almost beyond description. Every moment of horror, every staring eye paralysed by fear, every clenched jaw, every horrified gaze or terrified flight is encapsulated perfectly in the panels and pages of this issue. I will never get tired of singing the praises of Alex Cormack, but in this issue everyone involved in the artwork, the design and the lettering has gone above and beyond my expectations to deliver a seamless rollercoaster of action and horror.

Honestly, if the pacing of Rich Douek’s script doesn’t have you on the edge of your seat, then the artwork certainly will. I have it on good authority from my wife that I was visibly jumping around and flinching in my seat throughout, and was heard to be repeatedly muttering “shit, shit, shit” under my breath. I also freely acknowledge shouting “Jesus fucking Christ” at one point (you’ll know the point I mean when you get there.) There is a page in this issue that is so horrific and brutal and unexpected that I actually stood up and shouted.

My biggest concern at this point is that this isn’t the last issue, and I have no idea where we go from here. I know that Douek and Cormack subscribe to the ethos of “go big, or go home”, so judging by this issue, next month is going to be EPIC (oh god, please let it be epic!!!)

If you aren’t buying this series already there is practically no hope for you. However, there is time to catch up, and there will still be the collected edition, so you may partially redeem yourselves. 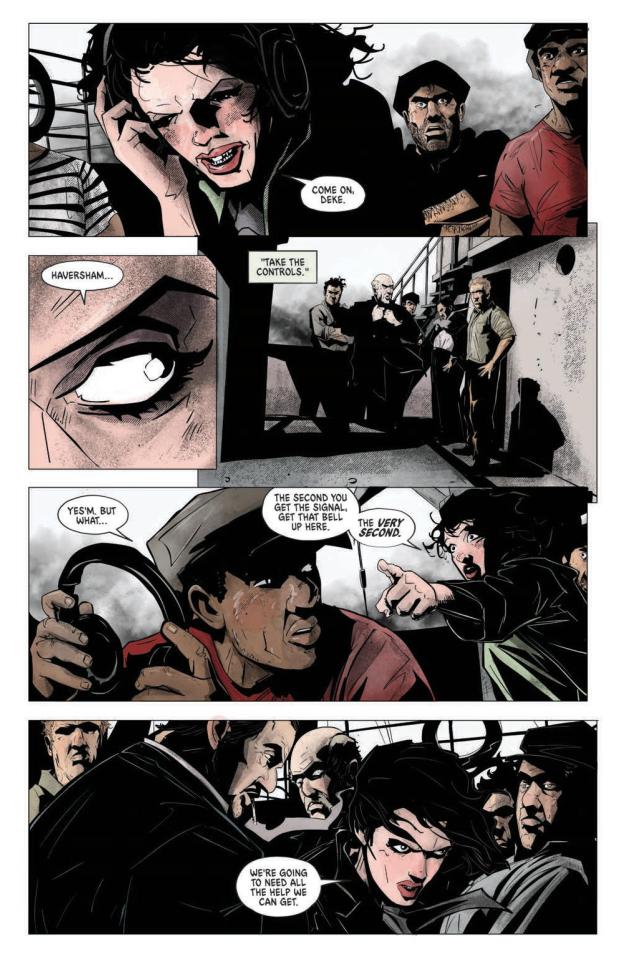