One day, the sun went out. It took just 23 minutes for darkness to fall on the Earth forever. Global chaos followed, and the remnants of civilisation, crowded into small and ill-equipped Outposts, are further tested when animals, plants, even humans start to transform into terrifying monsters known as Shades, intent on reshaping every living thing on Earth into their own image.

Ten years later and Val Riggs, only a young girl when the “Big PM” hit, is a Ferryman (callsign Sundog). Supported by her brother Emory, she transports people and supplies from outpost to outpost – an extremely risky profession where the Shades dog her every step, and the only way to survive is stay in the light.

This is a first issue that I just wasn’t expecting. I’ve seen no press for this anywhere, so when it came up on the review list this week it was fantastic to be handed it by my editor. I’ve been a fan of Scott Snyder for a long time, and it was his writing on Batman and Swamp Thing that got me back into reading “superhero” comics. However, it’s worth pointing out that nothing so far, for me at least, has eclipsed (pardon the pun) his work on Wytches and American Vampire.

Nocterra is a sci-fi/horror series, with strong nods to The Walking Dead, American Vampire, Pitch Black, Mad Max, Resident Evil, Stephen King, John Carpenter and a host of others. There are so many tropes at play here that I doubt I’ve picked up on even half of them. That said, I love the concept of this story. Post-apocalyptic horror with creatures straight out of a Stephen King novel is right up my alley, but there is a good twist to this. The contagion that creates the Shades is spread by the simplicity of being in the dark. Light has become the most precious commodity on the planet, literally a matter of life or death, and there is no cure once you’re “infected”. There is of course the obligatory fabled sanctuary, a place where the sun always shines and there is safety from the monsters and food aplenty; and one man who claims to have been there, and needs a proven and resourceful driver to take him back; and while this is a very familiar plot device it is one that will give this story a lot of room to grow into what I hope is going to be an Epic series.

On our first visit to one of the Outposts we are presented with a fantastic mix of Blade Runner, Escape From New York, Arkham City, the old frontier trading posts – heck, there’s even something of Mega-City One in the first image we see of Outpost 41. There is a lot going on, and it all works perfectly. The pace and tension are everything you’d expect from Snyder. The action scenes are superbly choreographed, delivering some really great moments that are backed by some equally great horror. The character development is also really well delivered in this issue. You get to know enough about the main protagonists (and antagonist) in this issue to know exactly what’s going on without sacrificing pacing, tension or oversharing. The centre of the story is obviously Val and her brother Emory, and their struggle to survive (I’m trying not to go into too much detail as I don’t want to enter too far into spoiler territory).

One thing I would say about our protagonists is they could easily be members of the Bat-Family. The way Val is written, the backstory, drivers and motivations, you could see her dropping into one of Snyder’s stories like Last Knight on Earth seamlessly. The same goes for her brother Emory; his skills with gadgets, their shared trauma, you could almost see him being an “Elseworlds” version of Robin where a young Lucius Fox dons the red suit. This is not meant to detract from them as characters in their own right, or to suggest that they’re derivative of other work, it is meant to point out that they really are so well developed and well written in the first issue that they could drop into a property with such a legacy as if they were always meant to be there.

Tony S. Daniel and Tomeu Morey have given 110% on this issue. The artwork from start to finish is simply superb. The physical world they have created is stunning – as I mentioned earlier, there are so many references you can see in there, but it all works together really well. Nothing jars, and nothing looks forced or campy or out of place. The same can be said for the character design, with some really well thought out and solidly individual characters that are easily identifiable and unique. There is just the right blend of near-futuristic technology and post-apocalyptic salvage going on that makes it believable and grounded. The “human” antagonist we’re introduced to could almost be a character from Grant Morrison’s run on Doom Patrol, albeit but way more sinister and terrifying. The Creature design is also superbly delivered with some almost Lovecraftian beasties, reminiscent of those described in Stephen King’s The Mist. I also like the way that they’ve made this world of perpetual night claustrophobic and full of terror, but at the same time full of light and diversity and detail.

This is a superb first issue from a fantastic creative team firing on all cylinders, and for a series I knew nothing about until today, it’s one that I’m sure I’ll be shouting the praises of over the coming issues. 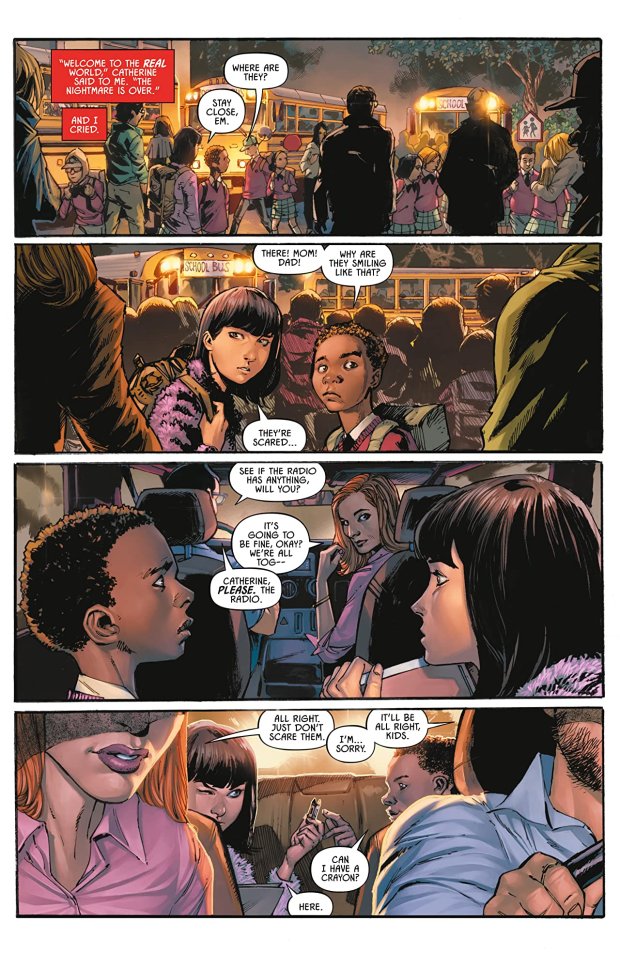