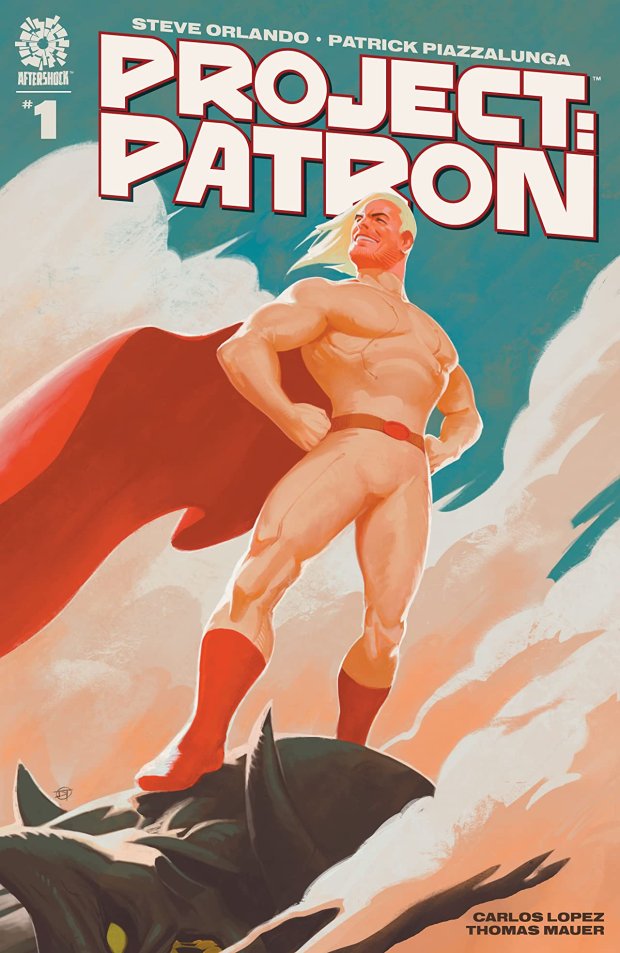 The story set-up is a familiar one; a supremely powerful and beloved hero battles an extinction-level threat in an epic skirmish which ends with both men dealing simultaneous death blows.  A short time later, the hero rises again and retakes his mantle as the world’s protector – only this time, the story has a bit of a wrinkle.  Y’see, the hero didn’t actually rise again, and is still very much dead, with his reappearance being fabricated by a sophisticated reploid controlled by a crack team of specialists. Welcome to Project Patron.

As set-ups go, this one had me interested from the moment I read AfterShock’s solicitation blurb.  That Steve Orlando was writing the series was merely the cherry on the proverbial sundae.  But more than the concept itself (which is admittedly rather cool), I was more interested in how this premise could be fleshed out into a full series, and what kinds of twists, turns and machinations the creative team could inject into it.

This first issue gives us a brief recap of the aforementioned epic skirmish, before showing the new “Patron” in action, saving the inhabitants of the world’s first orbiting casino as it plummets to Earth.  So far so Superman, but from here we take a step back from the Patron’s exploits as we meet the elite team behind him, each tailored to take the controls for a different type of mission.

Orlando’s dialogue is top-notch as always, developing the characters and their interactions subtly throughout the course of the issue, and focusing the bulk of the spotlight on psychologist Ignatz, the newest member of the team brought in to serve as the Patron’s compassion.  It’s all familiar enough stuff in terms of character tropes, but the execution and unique premise adds a fresh feel to the proceedings.

Patrick Piazzalunga and colourist Carlos Lopez handle the artistic side of the book, delivering a heavily-inked style and some suitably expressive characters.  The character design is pretty great too, from hulking, Zangief-esque Davin Deir (“the muscle”) to the grizzled, cigar-chomping Commanded Kone, the aging leader of the team. The action set-pieces flow smoothly, albeit briefly for now, and there’s a real dynamism to the “montage” sequence where we get to meet the different team members.

The final pages throw a shocking twist into the proceedings, effortlessly answering my question about how Orlando and co. could spin a whole series out of this premise, and making my picking up of the second issue an absolute certainty.  A powerful opening then for a series which injects new life into a familiar trope and puts an intriguing, smoke-and-mirror slant on the world’s greatest superhero. Definitely one to look out for.