If our recent piece on Moonstone, the wonderful whimsical fantasy game from Goblin King Games, caught your attention, then wrap your eyes around their new Kickstarter – and if not, why not?

Fear not, though, as we’re going to give you a full catch-up on the weird marvel of a game that channels the minds and aesthetic of Brian Froud, Jim Henson, Terry Pratchett and Josh Kirby to create a quirky, chaotic and rather brilliant wee gem of a game.

Yes, Moonstone: The Arisen is coming! The Kickstarter campaign launched on Friday and is already fully funded after just one hour!

To help celebrate its successful launch, we were lucky enough to have a sit-down with Tom Greenway, the goblin behind the game.

BCP: Hi Tom, thanks for taking the time to talk to us! So first, for the uninitiated, tells us a bit about Moonstone: The Game and Goblin King Games.

You fight over magical stones that grow up overnight. Typically players compete to collect as many moonstones as possible before the end of turn 4, and while there are no Victory points awarded for hurting opposition characters, we have found that dead goblins aren’t so great at digging up and running off with the swag so that’s one route to victory!

It uses Stunning 32mm scale miniatures and unique card mechanics that really make the most of cards with lots of decisions, secret information, and constant social interaction between players -nothing is left to the roll of the dice. Our melee mechanic is particularly original with each combatant deciding on a combat move like ‘Thrust’ or ‘Low Guard’ which are resolved in a rock-paper-scissors-lizard-spoke style to determine the results of close quarter fighting. Our Magic is resolved with a different but equally unique bluffing mechanic.

It’s a deeply tactical game with infinite replay-ability with a very tight ruleset ideal for competitive play, but the setting doesn’t take itself too seriously. We have characters like ‘Doug the Flatulent, Boris the Bunny Summoner and Baron Von Fancyhat. An irreverent tongue in cheek humour permeates the whole fairy-tale setting. 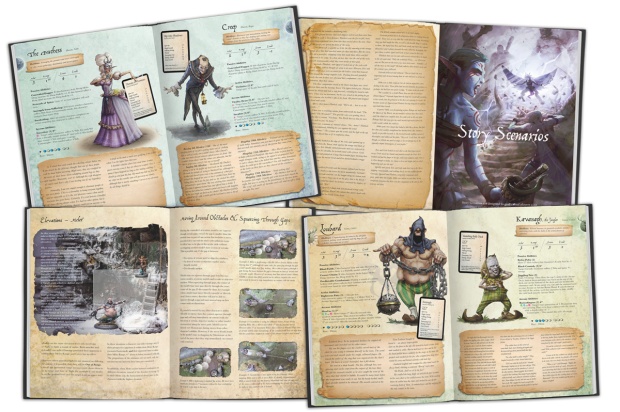 BCP: Great! How does The Arising fit into this?

TG: The Arising is a new expansion book which introduces new storyline, scenarios, characters and a campaign mode. In the campaign mode players represent the nefarious Wizards from the Tower of Grommel: an ancient and cruel race of Elrich, but known to most common folk simply as ’The Wizards’. These somewhat shady characters are the ones collecting the Moonstones (for a reason that will be revealed in The Arising book Narrative!) and you are hiring troupes of Goblins, Gnomes, Fauns, Humans and other races to collect on your behalf.

BCP: Can you give us a bit more of a lowdown on the details of the KS campaign?

The main reason for this Kickstarter is to fund the print costs of the new expansion book, but it will also feature a campaign card deck, Kickstarter Exclusive Limited Edition Miniature Diana enraged and potentially some exciting stretch goal such as narrative companion and concept art books, premium token sets, glow in the dark dice and more. All of these items have high set-up costs so running a kickstarter allows these exciting premium products to be within reach provided we get the support we hope for.

We also have a range of Catch-up Pledges allowing New players to get all the new and exclusive items along with some discounted bundles of back catalogue items – everything you need to play and some exclusive items too!

BCP: One of the real strengths Moonstone is the variety in gameplay styles – some factions are fairly straightforward, some more synergistic, some more finesse, and some just lots and lots of murder bunnies. Leshavault in particular seem to have added a layer of complexity with their Catastrophe shenanigans – can we expect some other new exciting mechanics?

TG: Ha! Its true that every new moonstone character brings something completely unique to the game and we’re always pushing the boundaries especially with the Leshavult – our latest box set the ‘Malachite Mystics’ being a prime example. There is so much design space I have earmarked for future development. I think you’ll be seeing new play styles and mechanics for a long time. I do know what’s coming next for characters and factions (and believe me these some very different play-styles currently in testing) but for the time being I’ll say no more on that and instead keep focus on The Arising book which does have a rather unique mechanic for handling the campaign:

In order to keep all games close and prevent any one player snowballing once they get a few wins under their belt the Moonstone campaign rules introduce a kind of side game that players can play during the rest of the week while they are not playing the actual tabletop game. This side game is called the ‘Machinations Phase’ and uses social political and betting risk/reward mechanics to create an organic self-regulating handicapping system that can drag down anyone who’s getting too big for their boots and give a leg up to players currently struggling.

BCP: Can you tell us a bit more about the Dominion humans in The Arising?

TG: Absolutely! The Arising expansion book will feature a handful of characters that aren’t yet released including the Dominion Humans. Most Moonstone players know Humans to be always belong to the Commonwealth faction but in fact ’The Dominion’ was originally a dynasty of conquering Human kings who crushed the warring tribes and created an era of harsh totalitarian control.

The Gnomes of course always grumbling lead an uprising about the outrageous taxes levied on teacakes, and many human peasants joined them. After a prolonged civil conflict and the overthrow of the human royalty a form of power sharing was brokered by the Wizards of Grommel that remains to this day where both representatives of the Dominion (now mostly under the control of Goblins and Faeries) and the Commonwealth share power (and generally achieve nothing but blowing hot air in the debating chamber).

However not all Humans, joined the Commonwealth, many of the land-owning elite were not happy to be losing their privilege are remained loyal to the dominion. They are bitter and twisted, individuals living in once decadent, now dilapidated manor houses. In terms of Play-style they fall between Commonwealth Humans and Goblins with almost vampire-like abilities that drain health and energy from opponents that they keep for themselves.

BCP: During lockdown, there’s been a real surge in solo gaming. Although the game’s bluff mechanics obviously make that tricky, have you given any thought to if we might see something for Moonstone?

TG: Moonstone doesn’t lend itself to Solo gaming, but we do have a fantastic Tabletop Simulator Mod so that anyone can play Moonstone no matter how isolated they may be physically. There are public sessions run every Wednesday evening run by the friendliest group of games you are ever likely to meet – Dicing with Life. They will provide demos (either interactive or video streams you can just watch) and also arrange an opponent for a full game if you already know how to play. If this appeals jump onto the Moonstone Players Group (https://www.facebook.com/groups/159322051100751) on Facebook or our Discord channel (https://discord.gg/KaUgxPuR) and just ask to join in.

BCP: Any hints as to what’s coming out the other side of The Arising – any plans for the future? Any other races that we’ve seen hints of? Perhaps… a certain Wizard?

TG: Oh yes! Many, many plans. Some say that some strange groaning noises have been heard coming from the Sunken City of Moonreach, both others say that is only a rumour… time will tell…

BCP: As for yourself, what ELSE have you been playing?

TG: Gosh, I so rarely have time for gaming besides not play testing Moonstone. Miniature skirmish games are my favourite format and there are some splendid other skirmish games out there but when I do take a break from testing I like to cleanse the pallet with something completely different. I have really been enjoying Oak & Iron lately (a non-fantasy naval warfare game) as well as Blood Bowl (a long-time favourite with a nostalgic appeal and a sense of humour to it that keeps me dipping back in some 25 years after I first played the game).

BCP: Thanks again for talking to us!