Proudly proclaimed by Marvel in their pre-publication hype as a title containing “all-new tales starring your favourite X-Men” and “spanning classic eras”, there is certainly some sort of entertainment to be found buried beneath this comic’s numerous word balloons and text boxes. Yet for those readers who were looking forward to enjoying “a story decades in the making”, there is Fabian Nicieza’s opening salvo of dialogue-driven exposition to disconcertingly navigate first.

Indeed, arguably the opening half of this considerably-sized thirty-page periodical is bogged down in both an overly-long rationalisation as to just why Erik The Red would abduct Scott Summers’ grandparents from the Providence Hospital with a flock of Crystal Claws, and the history behind Adam Neramani covertly residing in Iowa on the planet Earth; “On the day my powers manifested, I learned I was not Shi-ar, or Mephitisoid, or even really Human. I was none. I was all. I was more. I was a mutant.”

Happily however, once Cable makes an appearance to convince the “Disciple of the Claw” to seek out Cyclops and Havok of the X-Men, the pacing of “Shattered Crystal, Scattered Dreams” transforms into a seriously sense-shattering thrill-ride which doesn’t let up until its well-handled cliff-hanger. The arrival of Hepzibah and the cyborg Raza Longknife leads to some utterly insane action sequences, which not only mange to drum up plenty of suspense as to Adam-X’s survivability when facing the two lethally-skilled Starjammers, but also manage to progress the book’s central plot without resorting to too many of the aforementioned speech bubbles.

Without a doubt though, this comic’s greatest asset has to be Brett Booth’s incredible-looking layouts, which must have lured many a bibliophile perusing X-Men Legends into placing it at the very top of their Pull List. Whether it be sheer speed with which Erik’s Crystal Claws literally tear through an instantly overwhelmed line of gun-toting Police officers, or the Forsaken One’s formidable fight against Hepzibah and Longknife in a head-tall corn field during the dead of night, the artist’s style encapsulates the distinctive ’90s vibe this book was clearly aiming for with its nostalgia-inducing “fan-favourite runs.” 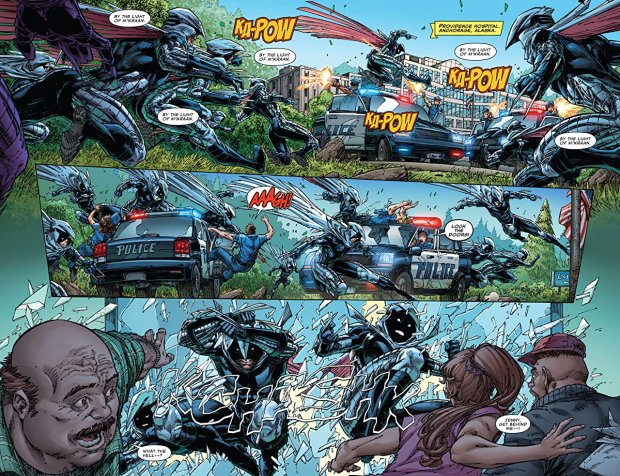