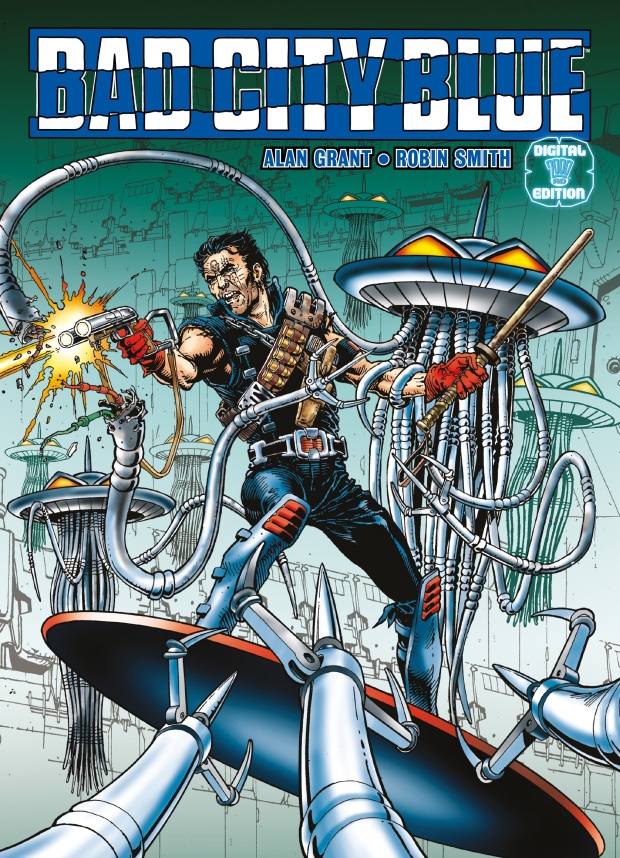 Debatably turning the character of Blue completely upon his head by having the rogue button man finally remember his past as the notorious gang leader of the Skulls and resultantly revert back to his disagreeably repugnant “devil killer” persona, Alan Grant’s script for the second half of Bad City Blue definitely portrays this graphic novel’s lead protagonist as a far  less sympathetic ‘hero’ than the Scottish author did during its opening chapters. Indeed, Grant actually appears to go that extra step in presenting the “slumscum” as something of a brainless barbarian, who needs to be repeatedly taught just how to manipulate the engine alignment controls so as to blast the asteroid-based municipal free of a nearby Black Hole.

Happily however, liking the brutal “Grexnix” isn’t a precondition to thoroughly enjoying this comic strip’s insanely violent zarjaz action, and actually makes perfect sense once it becomes clear just how much street-fighting savvy Blue is going to need to remember if he’s ever going to make it to the central computer buried deep within the Power Dome alive. In the past, whilst being wracked by mind-controlling headaches, the befuddled assassin was understandably somewhat vulnerable, and quite quickly fell prey to a pair of his government-sponsored peers when he encountered them at the entrance to the city’s jungle habitat.

Now “Dirty Blue” is involved in an exhilarating race against the clock though, the aspiring “Big-Chief Boss” needs to be at his very best if he is to outfight an entire posse of experienced button men – all of whom have been dispatched to kill the “real bad scummer” before the man can complete his life-or-death mission. These deadly skirmishes, stunningly penciled by “Scrotnig” artist Robin Smith, really help ensure that the audience are constantly kept guessing as to whether or not the foul hooligan will be effective in his endeavours, and definitely help reiterate the notion that the brutal hitman is bereft of any pity or compassion; “Horgan an’ Shrap eat ‘crete. R.I.P., bruds!”

Ultimately though, this digital first publication’s most memorable moment has to be its sense-shattering conclusion, which doubtless traumatised many a teenager when it was first revealed within the pages of “2000 A.D.” way back in July 1986. Having somehow managed to overcome the last button man, Teco, despite suffering a “shoulder shatter”, a semi-distraught Blue realises that he’s going to need to hurry if he wants to be known as the “top scummer, citywide”, and is last seen powering through the space-floating metropolis on his skimmer, plotting his presumably short-lived ascension.