On the evening of Saturday 16th November 1957, Plainfield police visited the Gein farm in connection with the disappearance of local woman Bernice Worden. What they found has gone down in history as one of the most horrific and disturbing crime scenes in American history, and was instrumental in the birth of the pop culture phenomenon of the “slasher”, starting with Robert Bloch’s psycho and Robert Harris’ Jame Gumb, and continuing through both print and movie media to the present day.

I am a True Crime enthusiast. I’m one of those weirdo’s that will come out with “interesting” facts about serial killers, spree killers, or cults during a dinner party. I will proudly press my rather age worn and well-read copies of Douglas & Olshaker’s “Mindhunter” or Ressler & Shachtman’s “Whoever Fights Monsters” into the hands of anyone I can convince to read them. But the book that seems to spend more time in the hands of my friends than actually on my shelves, is Deviant by Harold Schechter.

I am also a huge comic book fan, so when I heard that Eric Powell was producing a Graphic novel about Ed Gein in conjunction with Harold Schechter, it was like the stars had aligned.

For those who aren’t aware of the story of Ed Gein (pronounced Geen), and without giving too much of the book away, Ed was a quiet and quite well thought of (if considered harmlessly odd), resident of a small town of less than 400. The discoveries at his farm in November 1957 saw him convicted of murder, grave robbing, and evidence was presented of cannibalism, bizarre human taxidermy, and necrophile practices. Ed Gein’s crimes captured the attention of the world, and led to his incarceration in an institution for the criminally insane where he died at the age of 77 in 1984.

If you are a fan of true crime or horror fiction then the story of Ed Gein is one that you should dig into. As I mentioned above, Gein was the inspiration for Norman Bates and Alfred Hitchcock’s masterful cinematic adaptation. Thomas Harris’ antagonist was based on aspects of both Gein and Ted Bundy, even Leatherface from Tobe Hooper’s Texas Chainsaw Massacre has his roots in Ed’s story.

As with the original book that this is based on, “Did You Hear About What Eddie Gein Done?” doesn’t just tell the story of Ed Gein’s crimes, it also details the childhood and upbringing that in no small way shaped the man that became what the press would term the “Plainfield Butcher”; and this book is a condensed but relatively faithful retelling of Schechter’s brilliant book Deviant (there are some minor changes to make the story work better in GN format) which is brought to life by Eric Powell’s unique and masterful artwork.

This is a truly fascinating and disturbing story and it’s testament to Eric Powell’s skill that, while the subject matter is certainly grizzly and disturbing, it’s not delivered in a gratuitously sensational way. Don’t get me wrong, there are some sections of the book that are utterly horrifying, and Powell does a worryingly good job of making your flesh crawl through these moments, but they’re handled well, and without cheapening Schechter’s work.

I’ve lost track of how long I’ve been reading books by Eric Powell, but I’ve always been a huge fan of The Goon and Hillbilly, the artwork for which has always been so incredibly good and so detailed that I would happily just sit with a book of Eric’s drawings, and just absorb the skill that goes into them.

There are also some really clever and quite amazingly detailed design elements to this book. Stacks of newspapers giving the headline’s of the reports of the “Plainfield Butcher” case as an example which, if you look closely, have completely legible type throughout, and I spent ages just trying to read those.

I will always be interested in comic book/Graphic Novel retelling a of true crime stories, it’s combines one of my favourite topics with my favourite format and this is a stellar addition to the genre. 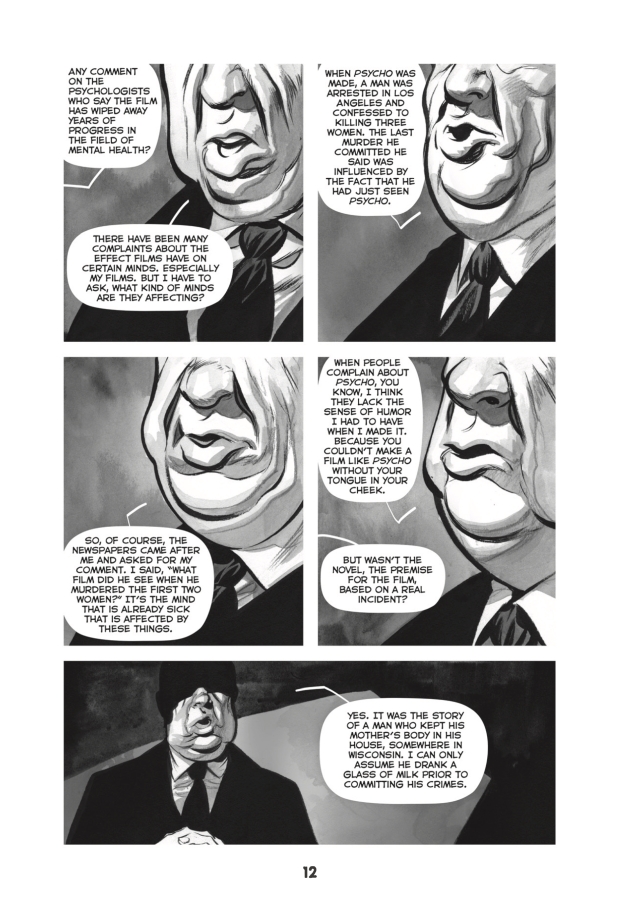 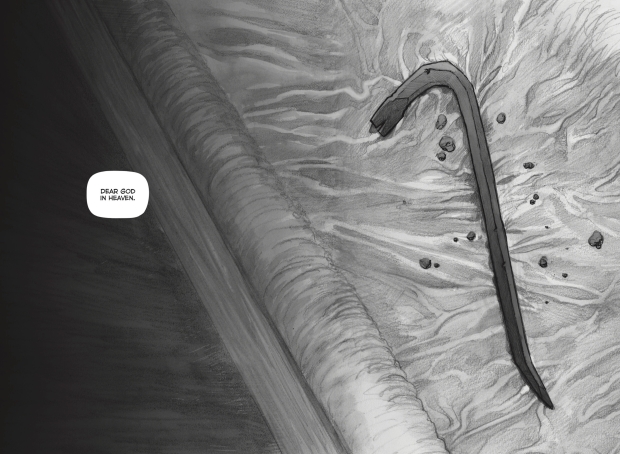