When I say that The Long Halloween Special is my most anticipated comic in over 20 years, I’m not exaggerating.

As a 14 year-old I bought the first Halloween special, not knowing either Jeph or Tim’s work, immediately knowing that their version of Batman was the one I wanted to see. Dark, noir, sombre, true to the character.

As a 17 year-old, I excitedly bought the Long Halloween, not knowing the impact that it would have upon me not only as a Batman fan, but in my life in general. It very quickly became my favourite Batman story. Each month I would travel to Glasgow to the comic shop to buy the latest issue, knowing that this was my Batman. Dark, noir, sombre, but never depressing.

This felt like the Batman I always wanted to see, but one which was frequently drowned out by 50 issue crossovers, evil strongmen, avenging angels and city-destroying earthquakes. This was a creative team who respected the reader, giving us in the process the best Batman epic that DC had ever published.

The answer is, of course, that it can’t. This story has to be taken on its own merits, forging its own path to be the collaboration we needed in 2021. Thankfully. I’m delighted to say that it does not disappoint. Not one bit.

This special plays to both Jeph and Tim’s strengths: small character moments, nice little pieces of dialogue, beautiful compositions, quiet asides, and glorious splash pages, topped off with a priceless Halloween guest for the Gordon’s that is worth the cover price alone! (No spoilers)

Most of all this feels very much like a Loeb/Sale story. The team haven’t lost their magic, Richard Starkings is as on point as ever, and Brennan Wagner makes the colours his own, whilst complimenting the legendary Gregory Wright’s original colour scheme perfectly. The first rooftop scene being a particular delight. Seriously, this man may be the best to colour Tim’s work.

As a 42 year old, “Nightmares” was the most fun I’ve had in years reading a Batman comic. It recaptured the joy, the fun and excitement and yes, it hit me with a massive jolt of nostalgia.  I hoped I would enjoy this, but I also feared I would be disappointed. Turns out, I needn’t have worried.

17 year-old me would have loved each and every page of this comic.

42 year-old me had tears of joy and delight.

The team are back, and they didn’t let us down. 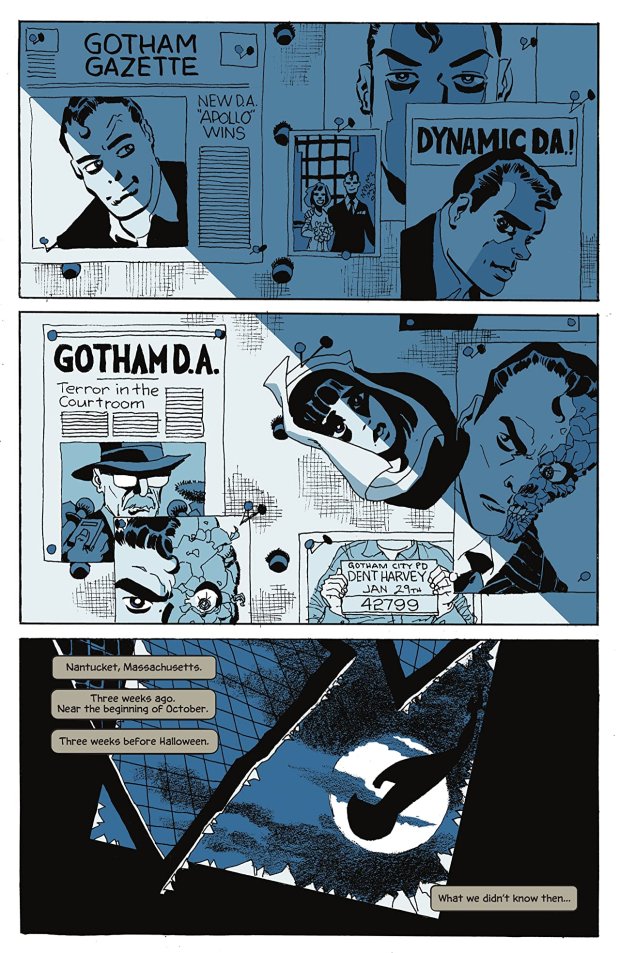 The writer of this piece was: Craig Gorman.
Craig Tweets from @Gorminator1979